The Most Hated Men in Sports

Here we are in the lull of sports playoffs. The Stanley Cup just ended. The NFL isn’t playing. MLB is going through the rigors of the regular season and in the midst of the NBA Finals, thankfully those coddled millionaires get ANOTHER off day after landing in an exclusive hangar being whisked away from their private jets in stretch limos filled with hookers, cocaine and booze I can’t pronounce nor afford. So let’s talk about the most hated man in each of the major sports during this hiatus, shall we? None of this is at all balanced, rational or thought-out. It’s mainly jealousy that these guys are awesome and not on the teams I root for (except for one).

Pretty sure this one is unanimous. From his cocky-ass special “The Decision” to his goddamn messiah complex on the court, there are TONS of reasons to hate this asshole. His flopping technique is unparalleled. I believe he played the fish at the end of Faith No More’s “Epic” video.


How those spineless twerps in Cleveland accepted him back with open arms, I’ll never understand. This prick left them in the dust, the fans burned jerseys, hell the OWNER OF THE CAVS told LBJ to go get fucked, but years later, “Oh I’m coming home” and all is right with the world. This guy’s a grade-A dickhead.

HONORABLE MENTION: Kobe. It’s Kobe, right? Sure he just retired, but the hate is still there.  Only the Lakers and their asshole, fake fans like him. They show up in the 2nd quarter with around 9 minutes left to be seen on camera, and head out in the 3rd, with their shitty Black Mamba shirts on and ugly, plastic surgery faces. Fuck LA. Oh, and Kobe too. The daughters of the world are in a safer place now that he’s not travelling all over the US during the season.

If anyone can give LeBron a run in the flopping department, it’s this no-beard-growing asshole. As with all the athletes on this list, this man’s talent is off the charts in his sport. But so is his pandering, kiss-ass behavior toward the refs. Priests don’t molest kids as much as the refs do Sydney. They LOVE this guy. It’s pathetic. He’s hitting guys in dicks all playoffs, not one call. And then he has to let other people fight his battles because God forbid the Golden Boy gets his hands dirty. He’s such a pussy. I hate him but would love him on the Bruins. It’s a real conundrum.

HONORABLE MENTION: Jesus, where do I start? James Neal, notorious scumbag. I would LOVE to punch him in the face, but he’d find a way to concuss me QUICKLY in retaliation.


Matt Cooke, who I despise for not only being a douche of a player but also for ending Marc Savard’s career, essentially. Oh, and Ulf Samuelsson because FUCK YOU.

I mean, I guess it’s still him? I’ve come full circle on A-Rod like 9 times. Loved him when he first showed up as a scrappy 18-year-old shortstop. Kinda hated him when he signed an enormous deal with the Rangers. Had a hatred HARD ON for him when he got traded to the Yankees to really amp up the Sox/Yanks rivalry. Laughed at him when he was banned for steroid use. But now I kinda like him again. Just out there hitting around .240, smacking dingers left and right and probably still shooting up some sort of horse laxative cause he heard it helps his lats, bro. You do you, A-Rod. I’m a fan.


HONORABLE MENTION: Jonathan Papelbon, I suppose. He’s a real fucking dick. Now, don’t get me wrong, I loved Papelbon when he was here, but he was a huuuuge dickhead in Boston too. But after he left the Sox, he’s been in Philly and now Washington. Philly sucked so he was barely noticed. Now the Nats are good, but Paps is an afterthought. I got no real hate radar on MLB players right now.

I’ll say this right off, you people that hate Tom Brady, you’re correct in your hatred. The man is a work of art, chiseled from granite. He’s a mixture of Zeus, General Patton, Han Solo, and Bandit-era Burt Reynolds with just a touch of Einstein in there. If I could get my hands on some of his hair so that I could include it in some of my recipes to perhaps get one iota of his talent, I’d be skimming the drains at Foxboro as we speak.  He’s been beating your teams' faces in for the last 15 years. Your jealousy and hatred make total and complete sense. He’s the best player this league has ever seen.  He’s a Super Bowl-winning hero quarterback and in his spare time, he bangs Hollywood starlets then marries the biggest super model in the history of vaginas. The man is a GOD. So yeah, your hatred makes sense.


If your hatred for him stems at all from Deflategate nonsense, then I suggest you go read a science book, you inbred, mouthbreathing troglodyte. And maybe not put all your trust into everything the corrupt assholes in the NFL league office spread to you. You know, the guys that deny that getting hit in the head by 400-pound lineman leads to concussions. These are the same jerkoffs who determined that the Chargers using towels doused in stickum should just be a fine, or the Vikings and Panthers toasting up their pigskins on the sidelines deserve a mere warning. They didn’t give a shit about maintaining the integrity of the game back then, but now it’s a completely different story. Or how these same jerks let Ray Rice get away with beating his wife in an elevator. Which leads nicely into…

HONORABLE MENTION: The Baltimore Ravens. Just a disgusting group of asshole criminals (ignoring the fact that a tight end that used to play on the team I root for has a proclivity for murder). You have the aforementioned Rice. UBER scumbag Terrel Suggs, beating his wife, pouring bleach on her, driving around and crashing into shit. Their savior linebacker murdering people, --I mean lying on the stand about murdering people. The whole organization is filled with drug dealers, drunks, wife beaters and murderers (Don’t believe me? Check it out http://nfl-arrests.pointafter.com/d/a/Baltimore-Ravens ). The fucking WORST. 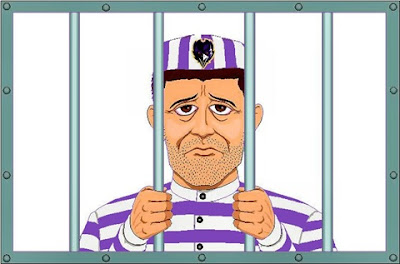 Posted by Justin Enuffa Ballard at 10:02 AM