Authors of Pain with Paul Ellering defeated an unnamed team in their debut match. Completely one-sided bout that immediately made me tune out. In the first few minutes of a show, this wasn’t good. I see nothing unique about this team, even considering they are trying to rework the Road Warriors, AGAIN. Their finish is a lariat/Russian leg sweep combination. Didn’t get either of their names, or their jobber opponents, or the referee for that matter. Paul is the only name I knew of these 5 men. 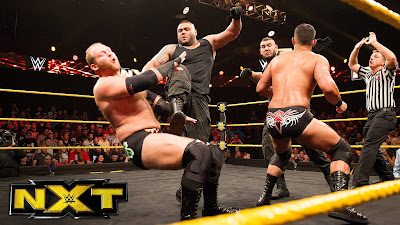 Not even worth giving a rating.


Andrade Almas was interviewed backstage about his debut. He had a black version of his entrance gear on, but would be wearing the white version in his match later. Dillinger interrupted, calling him a fluke. Rematch is scheduled for later tonight. I could have sworn that Dillinger was going to be a face after his match a few weeks ago, but as long as he’s on my screen I’m okay.

Paul and the Authors were walking by backstage, and Ellering refused to comment on his new wards. If there’s supposed to be hype I don’t see it.


Carmella defeated Tessa Blanchard. Still waiting for Tessa to impress me. Still waiting to see what everyone sees in Carmella. Carmella used the not Koji Clutch again.

¼*. Couldn’t be bothered. AND ONE OF THE COMMENTATORS, PHILLIPS I THINK, CALLED CARMELLA A SUBMISSION SPECIALIST.


There was a Samoa Joe promo, which bettered my mood. He asked EVERYONE what they would, and will, sacrifice to come after him. Awesome.

Blake and Murphy said they’re going to give it one more chance. And that match is next.


TM61 defeated Blake and Murphy in what I’m sure is their final outing as a tag team. TM61 was once again showcased this week, and as someone who has seen all of one 8-man tag of their work, I’m finding them an enjoyable duo with a lot of moves that I’ve rarely if ever seen. They ended the match with…something. I don’t know what it is. But they won nonetheless. 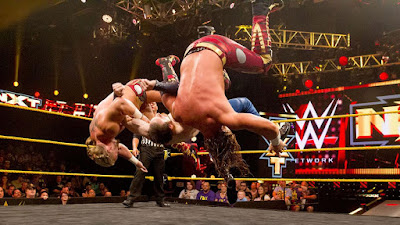 ** for a decent showcase of their potential


The Revival talked about being two time, two time, tag team champs. Clanged their belts together, gotta hurt the hardware.

Bailey said she’s going to the doctors next week, hopefully she’ll be cleared to wrestle.


Andrade Cien Almas defeated Tye Dillinger in a match that was better than their Takeover outing. I think they got overall more time here tonight. It was also better in that Dillinger got more offense and it was composed like an actual match, rather than an exhibition for Almas. I don’t know why you give a Luchadore a Bronco Buster in the corner for a finish, but they did. 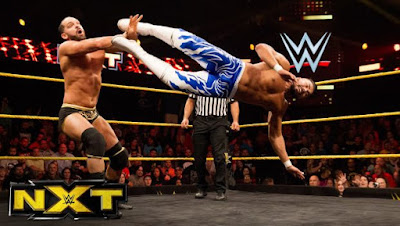 
Finn came out. Finn called for a challenge. Nakamura answered the challenge. This easily will be the match of whatever night they put it on. I want to watch it.

I need to start watching NXT with a drink in hand.

Posted by Justin Enuffa Ballard at 8:57 AM