The History of NXT TakeOver: The End

NXT TakeOver: The End looked on paper like it could possibly be the best edition so far.  The main event would be the first-ever NXT Steel Cage match, blowing off the Samoa Joe-Finn Balor Title feud.  Plus Women's Champion Asuka would defend against rising monster heel Nia Jax, NXT Tag Champs American Alpha would grant a return match against former Champions The Revivial, and perhaps most intriguing, Shinsuke Nakamura would have a dream match of sorts with Austin Aries.  But did the show live up to the hype?  Let's break it apart and see....

The opening match was little more than a showcase for the debuting Andrade "Cien" Almas, formerly known as La Sombra in Mexico and Japan.  But don't shortchange Tye Dillinger, who perfectly held his own and was a great complement to Almas.  They put together an entertaining little bout and the crowd had fun with dueling chants playing off the two wrestlers' nicknames, "Cien" or "one hundred" and "The Perfect 10" respectively.  Almas won with a running double-knee strike in the corner, which seems a little tame for such a flashy wrestler.  But this was a great way to warm up the audience.

Next up was the Tag Team Title rematch, and American Alpha and The Revival pulled out all the stops in this one.  There were tandem moves left and right, crazy false finishes, and throwbacks to the tag teams of yesteryear.  The Revival at one point broke out the Midnight Express's Veg-o-matic move, and later in the match set Gable up for a Doomsday Device-type move, whereupon Gable caught Dawson in midair and belly-to-belly suplexed him to the mat off Dash's shoulders, a la The Steiners vs. The Headshrinkers from WrestleMania IX.  But the real shocker was The Revival nailing Jordan with Shatter Machine and picking up the clean victory to become the first two-time NXT Tag Champions.  Helluva tag match, and these two tandems blow away the entire division on the main roster.  After the bout American Alpha was decimated by NXT's newest team The Authors of Pain, managed by the returning Paul Ellering.  Loved seeing Ellering show up! 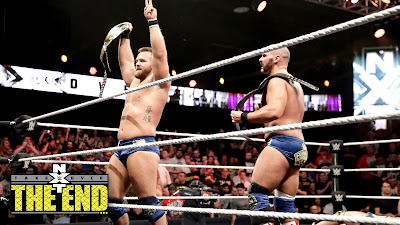 My most anticipated match was next as Shinsuke Nakamura faced Austin Aries.  The pace was slow and tentative in the beginning with lots of feeling out and tight grapples, but eventually Aries took over on offense and dominated much of the match, working Nak's back, neck and legs.  Late in the match Nak escaped the Last Chancery, absorbed a brutal Death Valley Driver on the apron, and dodged a tope on the floor before taking Aries out with two Kinshasas (A note about Nak's finisher: He delivers it differently than he did in New Japan and I don't much like the change.  It was perfect the way it was and to my knowledge he'd never injured anyone with it).  If I'm being totally honest this match underwhelmed me a little.  Don't get me wrong, this was my favorite match of the night, but just by a hair, and I'd expected a serious MOTY contender.  Nak vs. Zayn this wasn't.  But still easily a ***3/4 effort. 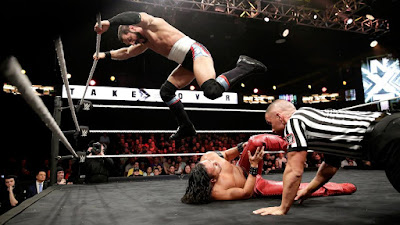 Perhaps the most controversial match on this card was the Asuka-Nia Jax Women's Title match.  For people used to seeing the women tear the house down in NXT this match was much more methodical and one-sided.  All of Asuka's usual offense was neutralized by Jax's far superior size and power, and the story was now "How can Asuka possibly take her down?"  I loved the psychology in this match.  Asuka is hard-pressed to have a bad match, and despite Jax's inexperience I find her totally captivating to watch.  She's grown into this monster heel character beautifully and I despite never really thinking Asuka would lose the Title here, Jax came off as a huge threat.  I really loved the moment at the end when Asuka finally knocked Jax down and hit her with repeated kicks to the head.  Jax shook them off and screamed defiantly before Asuka finally landed the knockout blow.  Even in defeat Jax looked like a total badass, and to me this match was superior to Bayley-Jax from London.

The Steel Cage main event was my runner-up for Match of the Night.  Joe and Balor threw together yet another strong showing that featured their usual deadly strikes plus some crazy high spots.  I do wish WWE would do away with the escape rule in cage matches.  I'm not sure how running away from the fight makes a person the winner.  These matches flow much better when it's about a pin or submission.  But that's a minor gripe; this match was a top-notch main event that was perhaps not quite worthy of being the final match in the feud.  Still it told a good story and had a very memorable ending, with Joe hitting the Muscle Buster off the second rope for the win. 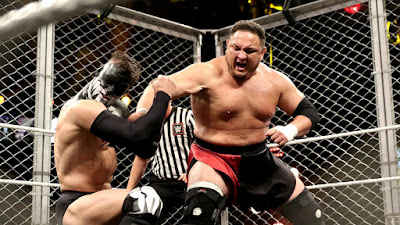 So that's five out of five good matches.  Unfortunately this show lacked that one "holy shit" match to generate a real buzz.  For me everything landed squarely between 3 and 4 stars, making for an easy-to-watch show that was satisfying but not dazzling.  It was inferior to Dallas, London and Brooklyn, but probably on par overall with Respect, minus the greatness of that main event.

Best Match: Shinsuke Nakamura vs. Austin Aries
Worst Match: Andrade Almas vs. Tye Dillinger, by default
What I'd Change: Hard to say.  There certainly wasn't anything wrong with this show, it just didn't knock me out like I anticipated.
Most Disappointing Match: I guess by definition Nak vs. Aries, since I was hoping for a home run and they hit a triple.
Most Pleasant Surprise: The continued maturity of Nia Jax, who should be able to carry the division a year from now.
Overall Rating: 8.5/10