NXT Brooklyn: The Third One 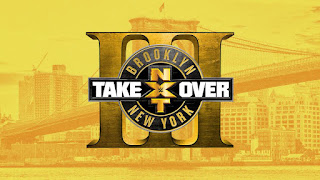 I just got off of a month of G1 matches, and I was afraid being burned out of really good New Japan content would hurt my opinions of this entire show. Plus, I haven't kept up on NXT in so long, that I thought I'd end up just glance over this card and not really pay attention. But I'll be damned if this wasn't the most fun I've had watching a WWE product in some time. Every match was as good, if not better, than was expected. Top to bottom the card delivered, each match felt different from the next.

The crowd was immediately hot for this match, which amazed me. This may surprise some of you but Johnny Gargano is really good at this. He may be the best White Meat Babyface the company has right now. What actually surprised me was Andrade, who seems to have finally clicked in NXT. He seemed a lot more confident and smoother in the ring than he was last time I watched one of his matches. The two had a very good match, for an opener. They kept the psychology simple and everything they did made sense. The ending was also clever, with Almas' manager distracting Johnny with a DIY shirt, before he was hit with a Hammerlock DDT and pinned. Originally I had picked Gargano to win here, but Almas definitely needed the momentum more here for...something we dont know yet.

Okay, let's get the negative out of the way: Im tired of not being able to tell the Authors of Pain apart. If I'm gonna have to watch these two, I need something better than "one has tattoos on his arm" to tell them apart. I'm begging someone to get their hair cut/not cut. Besides that, this was another really fun match. SAnitY was set up to be a more cohesive unit, and smarter as a whole than Paul Ellering leading the AOP was. Setting them up as a mind game playing stable is great. The teams ended up trading off who was face and who was heel during the match, which was an interesting event. It was the typical Authors of Pain match besides this, until the finishing 4-way made this match awesome. Nikki Cross is a trooper for taking the pain she did, going through a table sandwiched between Dane and one of the Authors. The maneuver that Wolfe and Young used to end the match fell a little flat, but it was still a  decent reaction for their win.

ReDRagon came out after and murdered everyone only as ReDRagon can. So that was awesome, and playing into events that would transpire after the main event.

I love me some tasty, tasty strikes. And I think only Itami/Ohno or Ohno/Black will be topping this one in the next few months. Both wrestlers benefitted from this match in some way; Black to have a signature victory against a known force in Itami (No offense to either Fish or O'Reilly, but they walked in and got beat), and Itami has the foundation for a new personality to show in NXT. I hope that this can help him get back on the track to a spot in NXT's larger picture. Itami had an extended heat segment, before being abruptly cut off with a Black Mass Spinning Savate. Which is keeping the move over as fuck. I know I didn't talk about this match too in depth, but I highly recommend you go and watch it.

Ember Moon vs. Asuka for the NXT Women's Championship

I honestly thought this was going to be it. I thought this had to be the transition between champions. But, destiny and Haitch had other plans. I didn't really pay all that much attention to the match, since I thought I knew where it was going and it bummed me out. But now, knowing what I know more than a week later, I'm even more bummed. What happened to Asuka is unfortunate, and the fact that the trigger wasn't pulled here is unfortunate moreso. Speculation now reigns as to what happens to the Women's title. Will whoever was set to dethrone Asuka win it in a throwaway title crowning? Probably. Rumor flies that they could just give the winner of the May Young Classic the title. Which I'm not for at all. Whatever happens at this point, it won't have had the same effect as Asuka losing it.

Drew McIntyre vs Bobby Roode for the NXT Championship 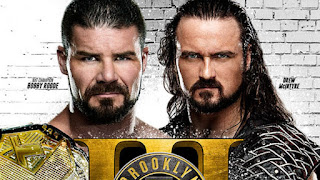 Drew and Bobby worked what can be best described as a best case scenario WWE match. Every move had meaning, every moment was important in the context of the match. It wasn't Lucha, Catch, or Puro. This was modern American "AAA" Wrestling. But, it was a fun one. It shows the potential of both bringing back old talent once cast away for some reason or another, and for signing talent who may be on the older side with a wealth of talent and experience. The ending exchange was fun, and Drew managed tokick out of the Glorious DDT before winning with the Claymore. With Bobby moving up, Drew had to look good here with the title win.


After the match, we saw the debut of Adam Cole, Baybay, and the formation of the Ring of Honor stable that had been hinted at for the past few weeks. It was a satisfying end for people who had been looking foreward to Adam's debut, and had been excited by the debuts of ReDRagon over the past few weeks.

Brooklyn ended up as another fun event. Thank God for the logical booking that this place brings. Definitely becoming the highlight of the NXT Year. With more talent call ups happening in the next few weeks, we have a good crop of both homegrown and indy picked talent to fill in for the chosen few moving up.