Didn't really feel like doing a full Fall Brawl write up, so here's the quick notes.

Flyin' Brian vs Johnny B Badd had a fucking phenomenal match. I can't recommend this shit enough. It's a marvel it was the opener. I don't even want to spoil the ending for you for maximum enjoyment. ****

DDP won the WCW TV title from Renegade in a nothing match. Watch it for DDP's smoking hot Diamond Doll, and the awesome finish. *3/4

The match between Arn Anderson and Ric Flair was so spectacular that I was ready to give it 5 stars. But the finish, Pillman interfering to set up the main event of this Nitro, ruined that prospect. Still a great match to watch. ***3/4 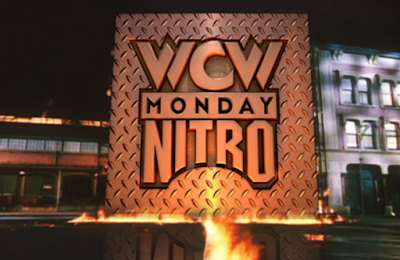 The show opened with The Giant and The Taskmaster coming from an ambulance claiming they killed Hulk Hogan. This show really is stuck right in the middle of the 90s.

All of you have to stop. If you've never heard the American Males theme, click the video to the left here.

We good? A'int that so clownshoes it's amazing?

This was going to be the Males vs. The Bluebloods, but Harlem Heat beat Robert Eaton down on camera, and I assume drove a stake through Steve Regal's heart in a vain attempt to kill him because he wasn't on this show. Harlem heat  challenged the free living Americans to try and take their titles. Heat took 80% of the match, before Rob Parker came out to woo Sister Sherri with promises of oil and land. This magically turned the tides, as Bagwell reversed a Pumphandle by Booker into a Crossbody for the pinfall and the American Males won the tag titles!
**

Randy Savage tried to hypnotize me into buying Slim Jims. Nice try, but I already have a month's supply of Original Flavor in my basement at all times.


Ric Flair came out for a promo, the highlight of all my Monday nights. He said he was gonna kick Arn Anderson's ass, but not before chopping Pillman. That's all, really. Just wants to chop him.

Mr. Wonderful vs Johnny B Badd

Okay, seriously. Where are all these terrible themes coming from? Have wrestling themes always been bad? No longer Paul Orndorff, just Mr. Wonderful. It was a boring match, Johnny is charismatic as all hell, but that couldn't save a never ending beatdown. The match gets a pass for having the best finish of all wrestling; the sitdown on a sunset flip by Wonderful
*

Just...bear with me on what I'm about to explain to you. Macho Man was on the beach, on a workout bench, lifting weights. Kevin Sullivan came over to kill Randy, a man only looking to get some sun and guns. But Sting, Ric Flair, and about 12 lifeguards came to drive the satanist away.

Macho Man then came out, unphased by the murder attempt, to call Luger a traitor and a snake. Oh yeah, Luger accidentally hit Macho in the War Games, and now Macho wants Luger's skin for his study. This led to Luger coming out in his pirate shirt, to argue with the insane 80s caricature. Going into a commercial break, we were promised more. There was none to come.

Ric did, in fact, chop Brian. Chopped the piss out of him. Brian responded by slapping him in the chest just as hard. Brian was already starting to unhinge at this point, and his work is staying steadily great. Match went around the outside the ring and back in, it was the Flair standard match at about 150% speed. Figure Four, and Pillman immediately tapped out.
**1/2


Next week promises the debut of Disco Inferno, Robert Parker brings in Kurasawa (Who's a New Japan Third Generation wrestler, but I don't want to spoil it), Savage vs. Taskmaster, and Lex Luger taking on Meng in the main event.

For the first time (only three episodes in) I wouldn't really recommend this week for a casual watch. The highlight is still the American Males theme, and nothing really happened that was very good, or very important to the Nitro timestream. Skip it, and join me again next week.