The Eve of Destruction: Previews NJPW in Fukushima, Hiroshima, and Kobe 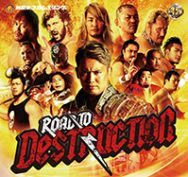 But...but I have All Japan and NOAH to catch up on still...

Right, we have three upper tier shows coming at us in the next four weeks. Each one has a marquee singles match to catch, and in between all these are several more title matches and multi-mans, many of which are going to be excellent in their own right. Even if someone wanted to skip the filler (like I'm going to in this preview) it'll be a Long September for all of us. Well, if we don't start, we're never going to finish. Justin and I are gonna cover the major matches from all three shows, and let you know our picks for who'll win. The road to the Tokyo Dome is heading through Destruction!

Landon- This is going right up here because this match is happening on all three cards in the next month. This is going to be the greatest series of car crashes ever seen in New Japan. All three teams have exactly one specialty; beating the shit out of their opponents. I don't know how many times the titles will change in September. Maybe all three times, but I'm hoping for zero. War Machine should walk out of Kobe with the belts, no matter who wins Fukushima and Hiroshima.

Justin- I find it very odd we're getting this same match three times, but they should all be enjoyable.  Hopefully they'll find ways to make them all different, other than simply changing the titles.  I agree with Landon, the belts should stay put throughout the series.  But I think there'll be at least one title change.  Let's say KES wins the first match.

Landon- I really hope that the CHAOS group doesn't win here. The whole match looks like it's just a backdrop for Okada and EVIL's match coming up in October, and changing the titles here would be a serious mistake. I don't think there's a trio in New Japan right now that is better than SANADA, BUSHI, and EVIL are, and they should be trios champions for a long time, possibly forever. 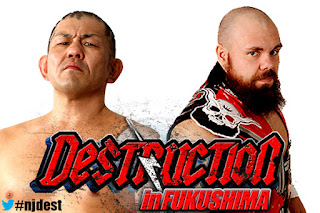 Landon- Ever since January, when I was introduced to the wonder that is Minoru Suzuki, I've always put my chips down on him. Yeah, I got burned for it at the New Beginning, but since then, he's been a safe bet. But here? I'm putting my faith in Big Mike. Raw power is the one thing that can believably counter just how dangerous Suzuki can be as a striker and grappler. If Elgin doesn't win the NEVER Openweight Championship here, I honestly have no idea who could possibly dethrone the Lonely Warrior.

Justin- This should be a great, brutal fight.  Big Mike has to win here.  He'll be a perfect custodian for the badass division that is NEVER Openweight.

Landon- Look, I l...I liiiii-la-la-la....I think Taichi is okay. And Kanemaru has proven to be pretty good the more I watch him. My love for Taguichi, however, can only be beaten by a few individuals. Even with my lukewarm respect for Ricochet and what he does, I'm going to be cheering for the Funky weapon here. Also, because we need to stop playing hotshot potato with the Junior Tag Titles.

Justin- Taichi and Kanemaru are the bottom of the Suzuki-Gun barrel, and Taguchi Japan just won the belts.  They keep them here.

Landon- After the Best of The Super Juniors, I think a lot of people realized just how great Despy can be, minus assault with pens. But KUSHIDA two-belts-with-two-trophies (ehh, we'll work on that one) is on the roll of a lifetime right now, and Desperado shouldn't be the one who stops that streak. I think it'll be a good match, but Suzuki-Gun goes 0-2 in Hiroshima.

Justin- This is what you call a filler title defense.  Don't get me wrong, Kushida is hard-pressed to have a bad match with anyone, but I don't see Desperado dethroning him.  Kushida will and should keep the belt till at least Tokyo Dome. 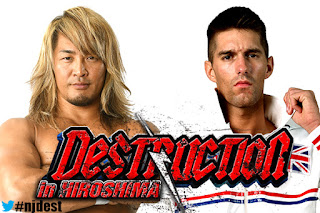 Landon- I don't know how this one is going to go. The fact coming into this match is that Tanahashi is injured. His arm is probably getting worse by the day. He'll never want to admit it, but at some point it's going to give out on him if he doesn't get the surgery. Sabre may not be the best choice for this title swap, but who would be at this point? With The Dome coming in 4 months, we need to seriously start considering what the Intercontinental Title match will be, and surgery would take Tanahashi out until past the show. So we either have a hurt Tanahashi, or we start to get a new champion ready to defend the belt. Is Sabre the man? Well, he could be.

Justin- Zack Sabre is fucking awesome.  And he should win the strap.  And I think he will.  Clearly the company has plans for him, given how well he fared in the G1.  Tanahashi takes time off to heal or have surgery and hopefully returns in time for WK12.


Destruction in Kobe, September 24th in the Kobe World Hall 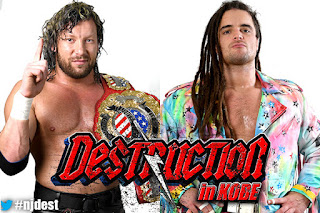 Landon- Kenny was recently pulled from all of the shows leading up to Kobe, to heal what is being reported as a meniscus related issue. Even if Kenny comes in at 60%, this'll still be an awesome match. Juice has had a ridiculous rise in stock over the past year, and I actually wouldn't be upset if he took the US title from Kenny. However, I think Omega retains the title.

Justin- This should be pretty great.  Hopefully Kenny's injury isn't serious.  I think he retains till at least WK12 when he faces (Please God, I need this) Kota Ibushi in the semi-main event.


Strap yourselves in, clear your calendars, and get ready for New Japan to give you their all in September. I'm sure we'll see you on the other side of each show.