Last week's show was a great romp through wackiness. These opening weeks look to be a great bridge between the best parts of the late 80s, and the good things to come in the Attitude Era. Last week did a great job setting up this week's Nitro, when we were promised Sabu, Mr. Wall Street, and what was bound to be an awesomely horrendous Main Event of Lex Luger and Hulk Hogan. I couldn't wait for Nitro from 22 years ago! 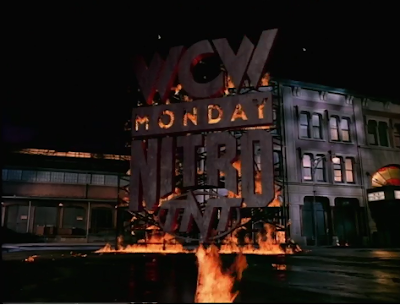 We were read the line up for the night, including the Norton and Savage match I've been really excited for, and "The Match of the Century" between Hogan and Luger. Oh, we'll get to that.

This was Sabu's debut on Nitro, not WCW though. He certainly was Sabu, doing Sabu things like springboard leg lariats, ridiculous dives, shortening his career, etc.. At one point, Mongo compared Sabu to a Full Back in football. I have minimal football knowledge, but a quick Wikipedia search says otherwise. I think I've seen Wright a couple times now, and he's always proven to be really solid technically. His German suplex bridge was particularly good. Eventually, after Bischoff hypes up such things as the Arabian Facebuster and the Arabian Leg Drop, Sabu won with a top rope Victory Roll, which looked a lot more devastating than it sounds.
**1/2

And then, Sabu needed to be Sabu. He got a table out. not a table as we know it today. This was a table approximately half way between today's gimmick tables, and those tables at your grandma's church when they play bingo. It was a sturdy, meaty table that Alex Wright was leaned against. Sabu took a leap of faith off the top rope, overshot his mark completely and went head first into the table. It was terrifying, and the decision on the match was reversed by Disqualification. What the fuck.


Ric Flair came out and started being Ric Flair. He complained that Arn wasn't out slamming beers and women with him. Not in those exact words, but might as well have. Luger came out halfway through, and Ric started salivating at the sight of his old running mate. He called him "Package" at least once. Lex only came out to say that ric never changes, then left. Why? I have no clue.

As Sting came out, Bischoff told us that Shawn Michaels was winning his match on the opposite channel, and that we shouldn't bother changing over to them. Sting, the great white meat babyface that I maintain every company needs, was able to get a really good match from Wallstreet. no disrespect meant towards Rotunda, but in 1995 his already small window of prime was past him a while ago. Sting went for  a slingshot dive into the ring and became almost the second casualty on this show when Wallstreet wasn't there to catch him. The finish was so simple it was great, just a crossbody by Sting off the top rope. Shit used to be so simple to get right.
***1/4


I noted that I wish I could watch the WCW Saturday night show. I'm not sure exactly why, but I do remember looking at the presented cards and thinking they were great matches. And yet, we get Thunder.

Scott Norton is my new favorite wrestler this month. A lot like Shinya Hashimoto, Norton has been a name where his reputation as a monster among wrestlers preceded him. He was at Wrestle Kingdom and New Year's Dash this year, and he was approximately twice the size he was here, but still looked great. Anyway, here he was a man killer working over Randy Savage. At one point early, Norton caught Savage off the top rope and worked a bearhug so tight that Savage acted like his back was broken from the sheer power of Scott's arms. What followed felt like 3 minutes of absolute back torture. NOAH's Backbreakers need to take note. Anyway, Randy evnetually started working the 80's babyface comeback. Slowly working through the pain to fight the monster. And then, the ending got awesome. The Dungeon of Doom came out, with The Shark (John Tenta) starting to get in the ring. Randy threw Norton into him, and the two fell into a heap in such a way that the Shark's (I assume) 400 pounds were pinning Norton's legs down. Randy then came off the rope with an elbow that Norton, completely trapped by about 600 pounds of man and fish, could not escape. This match fucking ruled.
**3/4

The opening of this match was fun. It was both men who, despite Luger being a heel at his core and Hogan having heel inclinations, both are trying to out babyface the other. Tests of strengths, followed by no-selling slams got the crowd rowdy and ready to see this clash of titans. And then, Hogan started to chain wrestle. Which led to Luger trying to counter chain. The match slowed to a crawl after that, and by the time Luger was calling to put Hogan in the rack, I had lost track almost entirely of who was ahead. But the crowd went nuts for the rack, which Hogan was in for a while. Rack...and Rack...and no one's moving really...then Luger lets go thinking he won. Fuck knows what happened, but about ten seconds later the Dungeon of Doom came out to attack Hogan for the Disqualification.
*1/2

Savage and Sting came out to help Hogan. An awesome segment ensued. Vader has been taken out of Hogan's team for the War Games (They said he didn't sign some vague contract in time, but really Vader had been in a backstage fight with Paul Orndorff weeks before and would never be on Nitro proper, or the PPV). Savage said, as only he can, that he didn't trust Luger, and Sting did likewise in favor of his friend. This was four times as awesome as I can make it sound. This segment was great because you definitely got a sense of the four personalities in the ring. Well, three of the four, Hogan is a personality known worldwide at this point. The TL:DR of this segment is that Hogan decided that Luger would be their fourth man in the War Games coming up on Sunday.


Oh yeah, War Games is coming up. Not that they've announced anything other than The main event and Flair/Anderson on Nitro.