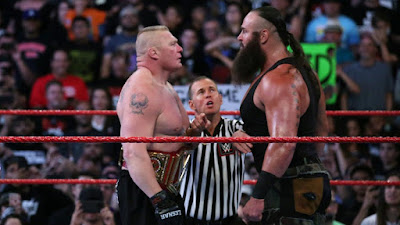 Man, if you shut off No Mercy after the fifth match you'd have two-thirds of an easy PPV of the Year candidate for WWE (Nothing they do this year will ever touch NJPW's top shows).  In the first five matches there was strong action, good variety, and nary a misfire.  And then WWE failed to stick the landing, offering a disappointing main event and a flat-out offensive Cruiserweight match.  But before I really start complaining, let's go through what was good about this show, because I really did like the first couple hours.

The show started with The Miz vs. Jason Jordan for the Intercontinental Title, in a match literally no one was invested in.  But goddamn if they didn't pull out a solid opener.  I've been a reluctant fan of Miz's in-ring work for years, as a guy who can deliver a decent match with almost anyone of reasonable ability.  Miz's strength as a worker is that he's an excellent listener; he knows when to let his opponent lead the way and just go with it.  He's very unselfish in that regard.  As for Jordan, he proved last night why he deserves better than this insipid Kurt Angle angle.  Jordan could be marketed as a blue chip suplex machine, and with some character repackaging could become a great upper midcard heel like The Rock circa late '97.  These two put together a crisply worked match that the crowd was actually fairly into, until outside interference cost Jordan the match (much to the crowd's delight - Jordan needs to go heel).  Nice work by both guys. 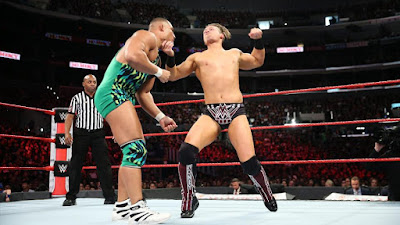 Second was the unnecessary Bray Wyatt-Finn Balor rematch, where the company took a backwards approach to this feud.  Balor resorting to The Demon should've been the climax, but instead he just came out as himself, and they had a perfectly serviceable undercard bout.  Nothing terribly memorable, but this was just fine and Balor won to hopefully put this feud to rest.

The show peaked for me with the Tag Team Title match, another wild affair between Rollins & Ambrose and The Bar (Jeezus that's a terrible team name).  These four were having a splendid match until Ambrose catapulted Cesaro into the corner, and Cesaro ate a mouthfull of ring post, knocking out at least two of his teeth.  Holy shitballs that had to hurt.  And Cesaro wrestled another ten solid minutes after that.  I woulda called it a day.  "Sorry fellas, I ain't got no teeth.  I'm goin' home."  Not only that but the energy of the match actually ramped up after that, with wild tandem offense and some great near-falls.  Ambrose and Rollins finally retained after another Rainmaker knee/Dirty Deeds combo.  Excellent tag match.  It's kinda sad both teams can't be champions really.  Cesaro better get a bonus for this too. 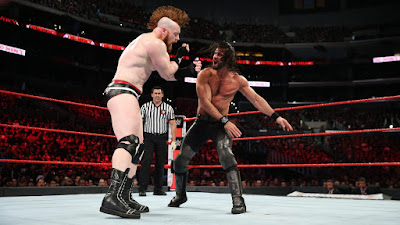 The most surprising hit of the night for me was the 5-way Women's Title match.  Going into this I hated the idea of yet another wacky multi-person Title match, as they've been doing these ad nauseum this year, particularly with the Women's belts.  But all five of these women worked really hard, put together well-timed, neatly executed spots that showcased everyone, and had a memorable match.  And appropriately Alexa retained so they can build toward her inevitable date with doom, called Asuka.  Really strong stuff. 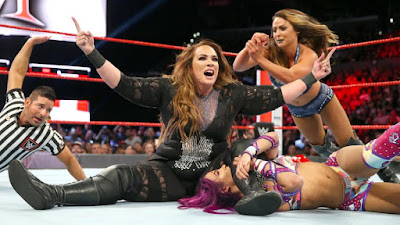 The good part of the show climaxed with the John Cena-Roman Reigns main event, which wasn't quite a WrestleMania-level match but was quite good overall.  The early minutes of the match featured way too much generic Reigns offense, and I think it would've better served the story they were trying to tell if Cena came out of the gate strong and dominated Reigns.  It would be the classic case of the veteran taking the younger guy to school, and it would've given Reigns more reason to get frustrated and show more of a mean streak.  After the first six or seven minutes though the match picked up and we got the usual WWE-style finisher fest, with Reigns kicking out of multiple AAs including one off the second rope.  Reigns later hit a spear on Cena through an announce table, almost killing himself in the process.  In the end Cena hit two AAs in a row, Reigns kicked out, and hit a surprise Superman punch/Spear combo for the win.  Cena then reluctantly endorsed Reigns (Still not gonna make anyone like him), and basked in a "Thank you Cena" chant.  I can't imagine Cena's going away for good, but he'll be off TV for a little while.  I'd say this match was on par with the two Cena-Batista matches - a well-executed big-time WWE match.  Nothing amazing, but it mostly lived up to the hype.  The problem is still that Reigns isn't over as a babyface, and I don't think he ever will be until he has a good heel run first.


As I said, up to this point, No Mercy was on its way to being one of WWE's best shows of the year.  And then the Cruiserweight Title match happened.  Ten minutes of Neville beating the shit out of the cosmically underqualified Enzo, culminating in Enzo kicking him in the nuts and pinning him to win the belt.  Welp, this division's dead.  Remember back in 2004 when the 50-something Chavo Guerrero Sr. won the Cruiser belt, and the division never recovered?  This was about as stupid as that.  Enzo has no business being a cruiserweight wrestler; this division is more than just a weight limit, it's about a style of working.  And Enzo doesn't have anywhere near the capability to work that style.  Or any other style really.  He's a punching bag who can cut a promo.  Back in the 80s that job description was known as a "manager."  Also, Enzo is the babyface here, yes?  Why the fuck should we cheer a babyface getting his ass kicked for ten minutes only to win the belt with a low blow?  Yet another chapter in The Saga of the Unlikable Hero.  This sucked out loud.  I'm glad I haven't invested any time in 205 Live.

Now, a great main event could've instantly redeemed the final hour of this show.  But sadly Brock Lesnar and Braun Strowman weren't quite up to that task.  This match was decent and nothing more.  It played out like most Lesnar matches these days, without a ton of urgency and without the carnage we were led to expect.  Strowman dominated most of the match until the end, when he lost.  Lesnar kicked out of Strowman's first powerslam but withstood two others before hitting the F5 more or less out of nowhere for the win.  In the end Strowman was just another foil on the way to Lesnar's 'Mania rematch with Reigns.  Yawn. 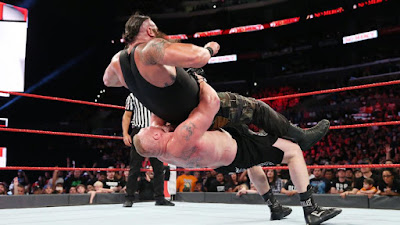 Overall No Mercy is an easy thumbs-up PPV, but with the final two bouts WWE somehow managed to snatch a B+ from the jaws of an easy A.  The table was set with five good-to-excellent matches and they followed it up with two mediocre-to-terrible ones.  When did WWE forget how to finish a show?

Best Match: Rollins & Ambrose vs. Cesaro & Sheamus
Worst Match: Neville vs. Enzo.  Fuck this company for this nonsense.
What I'd Change: Bump the Cruiser match at this point.  This belt is worthless.  Give the main event more time and more destruction.
Most Disappointing Match: Lesnar vs. Strowman
Most Pleasant Surprise: The Women's 5-way
Overall Rating: 8/10

Posted by Justin Enuffa Ballard at 11:25 AM