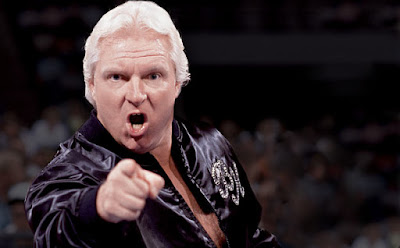 The wrestling world (universe?) lost one of its all-time greats yesterday, as legendary manager/wrestler/broadcast journalist Bobby "The Brain" Heenan passed away at the age of 72.  One of the best talkers in wrestling history, in 2002 Heenan sadly developed throat cancer of all things, largely robbing him of his greatest gift, his wonderful voice.

I first became aware of Heenan in 1986 when I started watching the wacky pretend sport of professional wrestling.  Like most kids who first take an interest in this stuff, I was initially a babyface loyalist.  My favorite wrestler at the time was of course Hulk Hogan, and anyone trying to take away his WWF Championship was a reviled enemy.  In the mid-80s Hogan had perhaps no more fiercely staunch onscreen detractor than The Brain, whose Heenan Family stable members frequently challenged for the belt.  During this era Heenan's mission statement was essentially "kill Hulkamania."  Thus I hated him.  I mean, HATED him.  Heenan was one of those heels whose appearance made me cringe, and I wanted to see him (and his wrestlers) get murdered in the ring.  It wasn't until 1989 that I realized "Wait, I hate this guy because he's so damn good at his job."

Wrestling managers are something of a lost art.  In the 80s a good manager could get a mediocre wrestler over just by cutting good promos.  The manager would be the mouthpiece, the wrestler was the muscle.  A heel manager could talk as much shit as he wanted, and he'd have his wrestler or stable there to back it up.  And if the manager was really good?  Whatever new guy he took on was instantly credible, just by association.  Not only that, if any new babyface came along to feud with one of said manager's clients?  Instant heat.  Bobby Heenan was one of those managers.  He took for example a low-card babyface team like The Islanders, who lost pretty much every week, and turned them into a formidible heel team who got the better of The British Bulldogs.  Conversely Ken Patera, a former Heenan client who'd been absent from WWF TV for three years due to a prison term, returned as a reformed babyface who blamed Heenan for his deviant ways.  Their resulting feud was red-hot for a little while, and made Patera relevant again.  Then of course there was Heenan's most famous angle, where he managed to turn Andre the Giant against Hulk Hogan, leading to the biggest match and PPV to date.  Just by his association with Heenan, Andre went from beloved special attraction to the most hated man in wrestling, overnight.  Bobby Heenan was one of those rare managers who could actually draw money.

1989 was the year I "outgrew" being a Hogan fan, having figured out that my interest in wrestling was now more about great matches, something I wasn't likely to see with Hogan.  Also I now tended to root for the heels, as I was finding most 80s babyfaces a pandering bore to watch.  Thus my appreciation for Bobby Heenan began to grow exponentially.  His antics as a manager now made me laugh, and his skills as a color commentator and talk show host (The Bobby Heenan Show debuted around this time) absolutely slayed me.

By 1991 Heenan quit being a manager so he could devote his time to the broadcast booth, and I couldn't have been happier.  Listening to Heenan bicker with Gorilla Monsoon was an absolute joy - their chemistry was perfect together and you could tell they were having the time of their lives out there.  Even Vince McMahon was a solid straight man for Heenan - the Abbot to Heenan's Costello.  With every PPV, Heenan could be counted on to deliver memorable, hilarious one-liners.  Below are a few of my favorites...


Monsoon: Brain, what would be your strategy in this match?
Heenan: Well, first I'd have my agent buy it for me.  Then if that didn't work I'd waffle him out back, with a tire iron.


(During the Bret Hart-Shawn Michaels match at Survivor Series 1992)
Heenan: What an athlete.
McMahon: Bret Hart sure is.
Heenan: You betcha-- NO! I'm talkin' about Shawn Michaels!


(Whenever Monsoon called Heenan out on anything) "I'm gonna hafta ask you to leave!"


(After Heenan insulted Stu Hart)
Ray Combs: Stu is sitting right over there Bobby, he may come over and slug the daylights outta you.
Heenan: That'll take three hours, we'll be off the air.


(About Kerry Von Erich)
"He's the only man who can hide his own Easter eggs."


(About the WWF's 1-900 number)
Monsoon: Kids, ask your parents' permission before calling.
Heenan: And if they don't give you permission, just take a baseball bat, sneak up behind them, and BAM!!


And probably my favorite...


So yeah, Heenan was GOLD on commentary.  When he left the WWF in late '93 the commentary was never quite the same.  Jerry Lawler made a fine substitute, but for me no one brought as much levity and hilarity as The Brain.  He enjoyed several years as WCW's top color man, but sadly his booth partners there never really had the proper chemistry with him.  Quite often Tony Schiavone seemed to let Heenan's setups and jokes go right over his head.  Then in 1999 the company replaced Heenan with Mark Madden of all people.  Just baffling.

Bobby Heenan is mostly remembered as a manager and commentator, but his colleagues also frequently laud his abilities as an in-ring performer.  Most of us only ever saw him wrestle in comedy matches like the one against The Ultimate Warrior when Heenan got stuffed into a weasel costume at the end.  But in the 60s and 70s Heenan delivered some tremendous matches.  It's just that he was so good on the mic, that's where his career gravitated.

It's safe to say there will never be another wrestling manager like Bobby Heenan, nor a color man as brilliantly funny.  Heenan's gifts as an obnoxious, standoffish, cowardly heel were unique and delightful, and he left the wrestling industry so much better off than he found it.  He will be missed.

Posted by Justin Enuffa Ballard at 11:14 AM