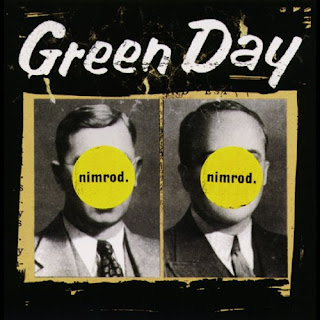 On September 2nd I posted a picture on Instagram (@thesurfacenoise people, what up!) my copy of Green Day’s nimrod. record with the caption: “I love 90s Green Day. So much energy and attitude, mixed with a smart ass sense of humor. But Nimrod never sat well with me. I give them credit for having a different approach on this album, a little musical diversification, but at the end of the day I only like 3 songs off this one, my favorite being "The Grouch". They bounced back for me a couple of years later with Warning but this one still hasn't grown on me.”

I received three comments to my post, one calling me a “stupid face” and that I was wrong, the other two commenters said that they never heard of a fan of 90s Green Day who disliked this album. It’s those two comments that really made me shake my head in disbelief. How could I be the only person who doesn’t care for this album while loving the rest of the band’s 90s catalog? Then I thought, well maybe I’m missing something. The album was released in 1997 when I was seventeen so maybe my interpretation of the songs would be different since my musical palette has certainly expanded within the twenty years of it’s release. Also, it has been a while since I last listened to this album so it wouldn’t hurt to revisit it.

So I did. Here’s my review.

Let’s begin with what I like about the album. First off, it’s not a bad album. It has a consistent sound and the things I like about Green Day are there: the energy, humor and some very creative word play in the lyrics. I’ve always loved the line in “Hitchin’ A Ride”: “Do you brake for distilled spirits?/I need a break as well/The well that inebriates the guilt”, along with the line “Cold turkey’s gettin’ stale/Tonight I’m eating crow”, which sums up perfectly the song’s subject matter about falling off the wagon of sobriety. Billie Joe has always been a good lyricist and who is able string together a narrative for an entire project very well. He continues this on nimrod., even though the album was written to be a collection of individual songs that have nothing to do with one another. It still works.

Before I re-listened to this album, I only liked three songs off it and two of them were the singles “Hitchin’ A Ride” and “Good Riddance (Time Of Your Life)”, the other one is “The Grouch”, my favorite on the album. It’s a song about Billie Joe’s fear of regret, growing up into a person that’s settled in life with a nagging wife and a son that’s a fuck up, and also losing his ideals. The song really served itself as a lesson to me at seventeen and I still hold true to most of the ideals of my youth without the compromising effect adulthood can have.

After revisiting the album, two more songs popped up that I really enjoyed. I love the breakneck speed of “Platypus (I Hate You) Billie Joe’s guitar playing and how he switches up his vocal melody three times in the song. Also, Tre’s drumming, as usual, is fucking spot on. I don’t know how I missed it at seventeen but I’m glad I found it now at thirty-seven. “Redundant” was the third single released from the album and is also a very highly regarded song among fans. Listening to it twenty years later, I can see why. It’s a preview of the overall sound that the band will adopt in the years following this album’s release and hearing that now is pretty interesting. Seriously, the song sounds as if it could’ve been off of Warning or American Idiot.

Alright, let’s get to what I don’t like about the album.

The first four songs on the album are decent to really good, however I’m not a big fan of “Nice Guys Finish Last” but I don’t hate it outright. The problem I have with this song has to do with people giving it too much credit. Its your typical 90’s mainstream American punk song and no one would be talking about it if it wasn’t released as a single or included in the movie Varsity Blues. The song’s concept is old. The lyrics are pretty standard. It’s just your run of the mill Green Day song. It’s not a bad song, it’s just okay. Let’s all get over it and move along.

After the first four songs, the album becomes a mixed bag. Even though they branched out a little and experimented (credit given), it wasn’t a huge departure from their previous albums. I can hear these same kind of songs on Dookie and Insomniac and they’re better on those albums. The way that “Jinx” just flows into “Haushinka” is exactly the same as “Brain Stew” flows into “Jaded” off of Insomniac and that transition was better and much more striking. This just sounded routine like “Hey guys, people really liked how we did that on the last album, let’s do it again!” and it fell flat for me.

Also, this whole pessimistic, I’m-a-fuck-up-loser-who-can’t-do-anything-right, attitude to the majority of these songs, had grown stale for me by the time this album came out and is still the case today. It even seems as though the band felt that way as well, evidenced by the very next album Warning, where the themes then became more about accepting your differences. It became, “You know what? I’m not a fuck up, I’m just different and I like that.” Enter songs like “Minority” and “Castaway”. Also, that whole thing had been recycled to death at that point anyway so it was time to move on.

I haaaaaaaaate the instrumental “Last Ride In” being included on this album. It utterly destroyed the flow and energy of the album and it’s 1960s surf rock theme lent itself to nothing. Musically, it’s an uninteresting song and there’s nothing really creative about it. It’s just there, taking up space. If you took that song off the album it would’ve only made it somewhat better. What’s even worse is they made a fucking music video for this song. What the fuck are we doing here people?

And for fuck’s sake let us not rant about this album and not talk about the ridiculous “King For A Day”. This wannabe ska song about dressing up in drag runs counter to their very sound, making this and the instrumental the only songs that do not fit well on this project. It excruciatingly sticks out, it has too many repetitive parts that don’t make it fun to sing along to but ska was a big movement within the late 90s punk scene so, I guess Green Day wanted a part of that.

All in all, the majority of the songs on this album were just basic, everyday Green Day songs. They didn’t offer really much of anything new with the exception of a few spots of experimentation. The band stuck to the same formula on Dookie and Insomniac and I’d much rather listen to those albums than this one. To sum up, it still falls flat to me.


What gets me about those Instagram comments is that nimrod. is an album that I never heard anyone talk about with any kind of reverence or appreciation. It was an album that was always included in the valley of Green Day’s career before regaining peak status with American Idiot, so I find it strange I received two comments alluding to the point that 90s Green Day fans love this album. I was seventeen when this album came out and I remember the lukewarm reviews and response upon it’s release and in the twenty years after. There’s very little of noteworthiness to this album and all of a sudden I’m some sort of anomaly, or weird contrarian figure because nimrod. ranks low in the list of Green Day’s 90s output for me?

Nah, I’m not buying it. It’s not my fault people overrate this album simply because A.) “Good Riddance (Time Of Your Life)” was played at nearly every school dance and was included on every mixtape or mixed CD you gave/received, and B.) It’s a part of the best decade in the band’s career which carries some sort of nostalgia to many, so much so that when someone says a negative thing about it there’s this massive uproar. That’s something you all need to deal with, not me.

Finally, my Green Day rankings are:


So, suck it up buttercups.