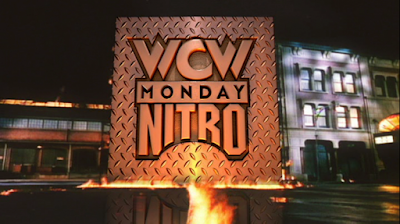 The announcers were running down what matches we were getting tonight, including the rematch of Flair and Arn Anderson from Fall Brawl, and the match between Randy Savage and Lex Luger where if Lex lost. he'd have to leave WCW forever. While they're talking, Ric came out, en robe, and began running down Anderson and Pillman. He was crazy for approximately 20 seconds before he walked away. Ric remains a gem on this show every week.

They recapped the past 3 weeks of Savage and Luger promos. About Savage being weary of Luger, and how Luger just wants trust...and the World title. This build has been Pay Per View caliber, but was given away for free to pop that rating.


Randy Savage vs. Lex Luger, Where Lex Must Leave WCW if He Loses

This match was, for the time and the men involved, main event levels of awesome in terms of the psychology and the action in the ring. They locked up for a solid minute and a half, rolling out of the ring together in the lock up like two bulls fighting over a Lady Bull. This was going very well, Luger playing a great heel here. Luger's character, a mix of narcissism and delusions of being a babyface, is an awesome thing that I would love to steal one day. It went well, anyway, until The Giant came out. He grabbed Savage and proceeded to try and break his neck like Rambo. It only half worked, rendering Savage unconscious. Luger, who was knocked out at some point before The Giant attempted murder, woke up thinking none the wiser of the practical corpse. Like Rob Terry years later, lifting a dead Ken Anderson for a slam, Luger hurked the body of Savage up into the Rack, where the referee lifted savage's unmoving hand three times for the submission.
***


Disco Inferno came out with his wonderful music to dance. Eddie Guerrero with a baby mullet and a singlet came out to tell him to piss off, cause he had to make the wrestles. I began salivating from excitement for...

I've been excited about this match for two weeks now. And I had every reason to be excited, because these two began to put on a clinic for how to grapple. Reversals into submission escapes, into stand offs. I loved it.
But then.
We got word that hulk hogan had arrived in the arena. Cool, whatever. Then we got a split screen with Hogan arriving and Jimmy Hart on speed as always. Fine, I can still see the match. Then we got the full shot of Hogan, really saying nothing and doing nothing but being Hulk Hogan.
You fuckers.
I was really enjoying this match, and so were a lot of people in the crowd. But here, on the fifth Nitro, WCW began to kill itself. It began the trend of telling fans that the wrestling and the action in the ring doesn't matter, because what matters are the stars and the personalities. Thankfully, we came back to the match for more action and an eventual pin fall, with Eddie using some combination for the pin. It was still good, but the Hulk Hogan interruption took me out of the actual action, and took a lot from the match.
**1/2

Hogan came out in the neck brace, with Jimmy hart and the World Title. He cut his promo promising vengeance and victory. Whatever, even in 1995 these speeches were cringe worthy. big, Stinky Giant has been part of each of them. So Hogan goes to leave, and an old lady jumps him from the front row. This old lady was, in fact, Kevin Sullivan. So his Legion of doom came out to murder hogan, and shave off his iconic Fu Manchu. Both the Nasty Boys and the American Males came out to try and save their meal ticket, but got quashed by the super villains immediately. Also, they left Hogan laying with Hitler's mustache, which must have been Sullivan fucking with Hulk. Lovely.

Arn Anderson vs. Ric Flair
This was essentially a continuation of their match at Fall Brawl a few weeks ago. If you pause the match after Ric punched Pillman that night, you could continue the match here. Shine, Heat, Comeback but it was great. Ric Flair is criticized a lot for having the same match all his career. He had that match, but only on people he knew he couldn't get anything better out of. When he was working with someone special; Arn Anderson, Ricky Steamboat, Sting, etc., the matches became awesome. A shorter but wonderful encounter, that ended in the Figure Four, where Arn immediately tapped out like a bastard should.
***1/2


This was all a setup, however, as Pillman ascended to the roped to attack flair, who was trapped in the Figure Four still. The beatdown involving Horsemen continued, until we were told we had to go to break. When we came back the show was ending.

There was some very good content on this show. The matches were all great, and even with the Hogan arrival and promo being hokey, the payoff of Hogan getting beat down was worth it. I would definitely recommend that people should find this match on the Network.