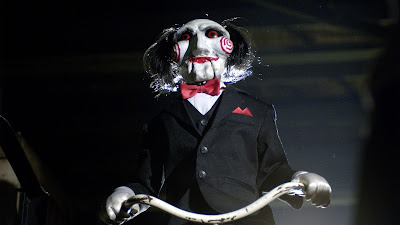 Hello. I want to play a game. The device you are reading is hooked into your brain. What follows is a half-assed sorta guide review thing summarizing all the Saw movies in anticipation of the newest installment of the series, Jigsaw, being released tomorrow. Here's what happens if you read this article. 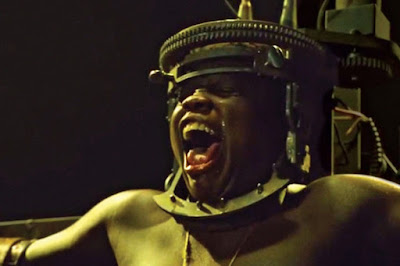 There is only one way to read the device. It is with your eyes. Look around, internet consumer, and know that I'm not lying. You better hurry up. Read or die. Make your choice.

I just re-watched all seven (7!!!) of 'em and here's some thoughts. (Obviously spoilers are ahead but come on. These movies are all the same. Capture. Torture. Kill. Implausible twist. Repeat)

Saw: The one that kicked off the franchise has what is possibly the most ridiculous plot twist of the whole saga (and that's really saying something in a series filled with more and more improbable plot twists). The fact that John Kramer, Jigsaw himself, was laying on the floor of the murder basement where he was keeping Dr. Lawrence Gordon and Adam is absolutely absurd. Dude just laid there half naked in a puddle of fake blood for like 12 hours. Just insane. But I loved it. Still do (you can find my actual review of this classic HERE). 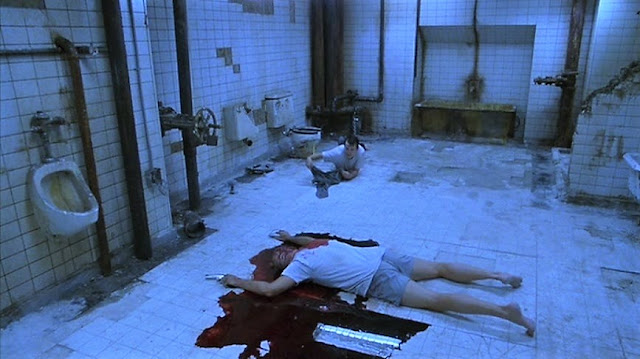 You gotta move your arms eventually, right? I'm sore just looking at him.

Saw II: Part 1 was essentially all a lead up to the reveal the Jigsaw was in the room the whole time. Part II really set up the plot of the rest of the series going forward. Donnie Wahlberg is a New Kid/Cop whose son gets kidnapped and thrown into a murder house, a huge upgrade over the murder basement in the previous installment. Eventually, Donnie done fucks up and is himself locked up into the murder basement, seemingly to perish for all time. This sets up what I consider to be the best element of the next three (3!!!) movies, the search for Donnie Wahlberg. That being said, part II was my least favorite of the films until a much later installment. The murder house is cool and all, but the characters in it are fucking TERRIBLE. There's a steroid freak in the house that realizes the combination they need for a safe are all written on the necks of his fellow kidnapped folk. Instead of telling them this so they can all work together to get out, he MURDERS them to read the back of their neck. Yeah, MURDERS THEM ALL. It makes zero sense. 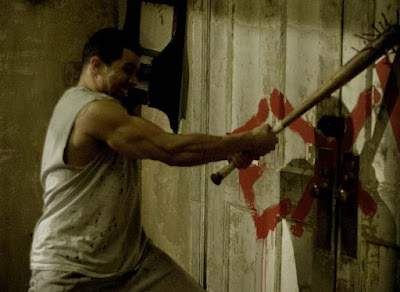 Saw III, IV & V: These are the apex of the series for me. I've put them all together here because these 3 really form 1 large flick. The narrative picks up right at the end of part II and the next 4 hours are all one big story. And it's AWESOME.

The search for Detective New Kid kicks into high gear as his fellow cops are on lookout for him. Meanwhile, a guy named Jeff is dropped into Jigsaw's newest trap. He has to deal with his own personal demons and his young son's death. As that is happening, Wahlberg's cop friend, Detective Rigg is also thrown into his own game. He's a headstrong young cop he always rushes into situations without thinking about the consequences, and he's gonna pay for it. The cool part about these two scenarios is Jeff is dealing with this in Saw III, Rigg is dealing with his game in Saw IV and the big reveal is that these events both happened at the same time. It's a really cool narrative trick when it happens at the end of part IV. I was blown away by how clever it was. 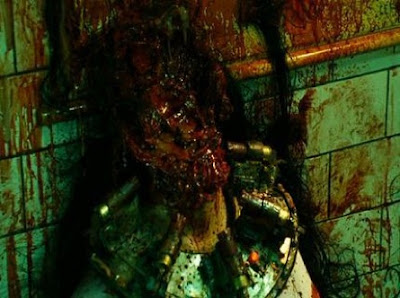 My brain after seeing the ending of these movies.

As all these elements play out, Jigsaw dies, we meet one of his apprentices, corrupt murdering cop Detective Hoffman. He takes over the Jigsaw murder marathons and they wrap it up all nicely in part V. It's a fitting end for the franchise, as the story they were telling was actually complete at that point. Except of course these movies were making a fucking fortune so we got...

Saw VI: This is the one where they tried to add social commentary. That's right. The horror series with a tricycle riding puppet who laughs at people decided to take on the health insurance racket.  Jigsaw’s demented protégé Hoffman sets a series of kill games for an insurance executive and his employees. Hoffman proceeds to filet these people all over an abandoned warehouse.  Because the best way to show health insurance salesmen what assholes they're being is by showing them their own gallbladders. (Sidenote: Jigsaw must have quite the real estate portfolio. In all these movies, these games happen in vast warehouses. The man's a walking Monopoly piece).  We're also delving deep into Jigsaw's life before becoming a serial killing mastermind. His wife Jill is front and center in this flick. This is really where the movies lose me. The story was over in part 5, but they needed the money to still come on in and they're clearly spinning the wheels here.  Hoffman and Jill are ok characters but I just don't like them as much as John Kramer. Of course, it's tough to keep having John around when you kill him in the 3rd installment. 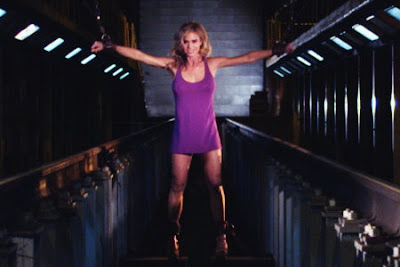 But Jigsaw sure did all right with the ladies.

Saw 3D: Which leads to this hunk of shit. Goddammit, I wanted to love this one. I wanted it to finish up the series and leave me happy (or as happy as a meaty blood fest can). The HUGE problem with this one (besides the fact that the people thrown into the kill game are all assholes and I didn't care about any of them) is the fact that Dr. Lawrence Gordon from the original finally comes back...but they blow that reveal by showing him right at the beginning of this one. His return should have been the big reveal at the end. The scene at the end when he abducts Hoffman shoulda been the first time Gordon was shown since the original. But they fucking blew it.

This is easily the major turd of these movies...so far. It also has the WORST performance in the whole series, performed by Chad Donella. The overacting and stilted delivery is goddamn HILARIOUS. He's 'acting' but all he's doing really is old cop cliches. He stares at shit too long. He thinks hard and gets frustrated so he walks around and rubs his head hard. And I don't think he can read. He's maybe the worst actor I've ever seen in a widely distributed major theatrical film (and yes, I've seen Sheri Moon Zombie act...this guy is worse).

With the 8th installment coming out tomorrow, my murder boner is growing anew. I'm sure it will be terrible and I'm sure I will still love. Don't get me wrong...7 sucked but I still like it. Garbage horror movies hit me right in the sweet spot and these are some of the most garbage-est around.

I leave you with my rankings of these slippery, gory flicks below from best to worst:

Yeah, that's right, I'm rating a movie I've never seen before above the 7th one. It's that fucking bad.

Join our Facebook group HERE and stay up-to-date on all Enuffa articles!