Sooo, Braun Strowman's totally fine then?  What a shock.  In yet another example of WWE stomping all over suspension of disbelief, Strowman has made a full recovery, only eight days after being crushed inside a garbage truck.  I'll repeat that - CRUSHED. INSIDE. A GARBAGE TRUCK. 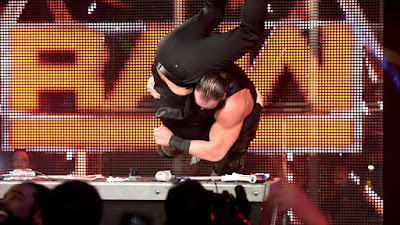 Hey, remember that time Triple H got in a car and then Steve Austin picked it up with a crane and dropped it thirty feet, and it flipped over before hitting the ground, pancaking on impact?  And then Triple H showed up the very next night on RAW, barely injured?  Or the time The Rock was being carted away in an ambulance and Hulk Hogan rammed it with a semi truck?  And The Rock was basically fine the next night?

Ya know what the problem is with angles like these?  If these guys are so indestructible that attempted vehicular homicide barely slows them down, what are they doing losing to plain ol' wrasslin' moves?  Braun Strowman has been involved in two angles like this, plus he's apparently strong enough to flip over an ambulance.  But one F-5 from Brock Lesnar puts him down?  Triple H can withstand being crushed under a car but a Seth Rollins Pedigree is too much for him?  Why should we ever invest in these matches when the company is calling attention to how unrealistic they are?

Furthermore, surely in a believable "universe" Kane and The Miz (and the truck driver) would face criminal charges for this incident, no?  They literally tried to murder Strowman by tossing him into a garbage compactor and turning it on.  Nothing?  Real-world laws don't apply in WWE?  Then why doesn't Kane just bring an AR-15 to the ring next time?  Plug 'em all fulla lead.  If you're going to incorporate attempted murder into a storyline, why not go all the way with it? 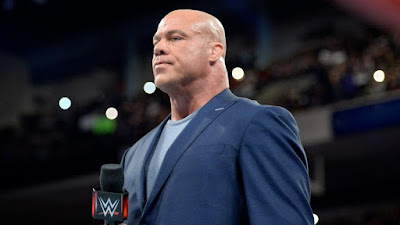 In other news, Kurt Angle will be wrestling again, as the captain of the RAW Survivor Series team, and it sounds like if he loses he's fired as the GM.  But since GMs are basically interchangeable, who gives a shit?  One would think Shane will be on the Smackdown team but since Randy Orton's already been named as the captain, it seems odd for Shane to be included.  Anyone else find it appallingly hypocritical that Angle and Shane have been cleared to wrestle but Daniel Bryan hasn't?  Shane's got his own history of concussions, no doubt exacerbated by the twenty-foot dives he frequently does, while Angle's body has absorbed insane levels of punishment over the last 20 years.  Bryan on the other hand has been cleared to wrestle by every doctor he's seen, except Joseph Maroon.  Ya know guys, I'm beginning to think Bryan's physical state has nothing to do with it....

Regardless, this match does have potential.  With Samoa Joe back in action it looks like Team RAW will likely include Angle, Joe, Brawn, Balor and maybe Reigns?  That there is a solid lineup.  Smackdown's isn't too shabby either, with Orton, AJ, Bobby Roode and probably Nakamura.  And I imagine Shane gets shoved down our throats again.  Question though - where does that leave Kevin Owens and Sami Zayn, since they're the hottest act on Smackdown right now?  They can't seriously leave them off the card, can they?  Here's what I would do - have 'em win the tag belts from The Usos and go on to face Ambrose and Rollins at Survivor Series.  You'd have yourself a major show stealer.  But what do I know?

I predict this Survivor Series will be one of those half-good shows, where the good stuff is outstanding and the bad stuff is unwatchable.


That's about all I got today - don't forget to join our Facebook group HERE to keep up with all Enuffa goings-on....

Posted by Justin Enuffa Ballard at 11:09 AM