WWE Hell in a Cell 2017 was....a show.  That's about it.  There wasn't anything horrible, there was one very good match, a bunch of okay stuff, and an obscenely overlong main event with the same unnecessarily risky spots we've seen a dozen times before.  It's clear that WWE, despite boasting one of the best talent rosters they've ever had, is becoming less and less a product for me.  Amid all the solidly worked matches on this show I found myself not caring much about any of it.  The one match I was emotionally invested in was the WWE Title match, and that of course went the wrong way (I knew I was gonna get screwed picking Nak to win).  The WWE product is just missing something very integral.  They've beaten the audience down with inconsistent or flat-out bad television for so long that nothing seems to really engage.  It makes me laugh when WWE apologists claim that New Japan is just a series of spotfests with no story and no characters.  To me that's exactly what WWE has become, case in point this main event.  I was drawn in much more by Okada-Omega's story than I ever could've been by Shane vs. Owens.  But before we get to that, let's look at the rest of the show.

The opening Hell in a Cell Tag Title match easily stole the show for me (and most, from what I've read).  New Day and The Usos work very well together and this continued that pattern.  The action was fast-paced, they made innovative use of weapons (including a clever spot where Xavier and Big E trapped an Uso against the cage with kendo sticks), and it was a good mix of violence and traditional wrestling.  Toward the end they brought out the big spots and nearfalls until finally the Usos hit their double splash on Xavier with a chair resting on top of him.  Yet another title change, and I'm not sure where the division goes from here since there are no other viable teams left.  But good match. 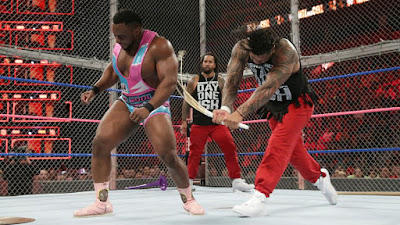 Next up was Randy Orton vs. Rusev, which I consider the least interesting feud on Smackdown right now.  Rusev's stock has fallen so far it's tragic.  He easily could've been pushed to Jinder's current spot and would've actually had the talent and credibility to back it up.  But no, he's now lower-card RKO fodder.  The finish to this match was memorable, as Orton pounded the mat to set up the RKO but Rusev pounced on him for an Accolade attempt.  Orton slid out though and nailed the RKO for the win.  Sadly this run-of-the-mill bout was one of Orton's best matches of 2017.  "Inoffensive" is apparently all he's up for these days.

The surprise hit of the night was the US Title Triple Threat (Tye Dillinger was added during the pre-show), as AJ Styles worked his ass off to get a good match out of Dillinger and Baron Corbin.  Everything good about this match can be attributed to Styles; whenever he was out of the ring the match ground to a halt.  Jeezus Corbin's offense is dull.  He's reminding me a lot of Sycho Sid, with nondescript offense and the occasional deer-in-headlights look.  The finish was well-booked to protect AJ, as he hit the Phenomenal Forearm on Dillinger but was knocked out of the ring by Corbin, who then covered Dillinger for the belt.  Can AJ please move back up to the WWE Title picture now?  That guy's too good for this company.  Side note: the whole "Perfect 10" moniker doesn't work for Dillinger.  If he were a heel it might, since he'd be a dorky bad guy who thinks he's hot shit.  But for that nickname to work for a babyface he needs to actually look like a "perfect 10."  Side note #2: it's a sad thing when AJ's "soccer mom" do is by far the best haircut in a triple threat; Corbin and Dillinger desperately need either hair plugs or a buzz cut.

Probably the disappointment of the night was the Natalya-Charlotte Women's Title match.  These two tore the house down in NXT three years ago but for some reason have never captured that magic on the main roster.  This match was fine, and I'm guessing it was booked to bring down the crowd a bit (a concept I still don't really understand - they put so much space in between the matches now there's no reason for a "come down" match).  Nattie worked Charlotte's knee for much of the bout, while peppering in some big moves like a great-looking powerbomb.  Charlotte eventually hobbled up to the top rope and hit her outside-the-ring moonsault.  But Nattie got up first and whacked her with a chair to draw the DQ.  I figured this would be the finish since this feud will clearly run two or three months.  But the match fell a little flat for me.

Now, about that WWE Title match.  This was probably Jinder Mahal's best match yet.  And it still wasn't very good.  Mahal did however break out a suplex and a low dropkick, doubling his moveset.  Nakamura seems like he's just not terribly inspired on the main roster.  I dunno if it's the way he's been used or the way his matches have been booked (Nak works much better as the aggressor than as the sympathetic babyface), but aside from his match with Zayn last year he hasn't shown the WWE audience what he's really capable of yet.  Still he was definitely trying to get a WWE Title-worthy match out of Jinder, and when Charles Robinson ejected the Singh brothers from ringside it looked like Nak might finally get the big win.  And then Jinder hit his powderpuff finisher to retain.  I'm pretty sure Vince is gonna keep the belt on this hack until WrestleMania.  It's unreal how stubborn this guy is.  Your experiment is a failure Vince, just admit it to yourself.  Business is down both in the US and India (Ya know, the country whose market was the sole reason for this clusterfuck in the first place?), Jinder doesn't headline Smackdown PPVs most of the time despite being the Champion, and he generally can't be trusted with anything longer than a TV main event.  Get the fucking belt off him and let's never speak of this again.


For some reason they put Bobby Roode vs. Dolph Ziggler in the death spot, and the two had a very forgettable encounter that ended with a series of rollups and reversals, until Roode got the pin with a handful of tights only for Ziggler to lay him out with a Zig-Zag.  Obviously we'll see a rematch on Smackdown.

The main event was an excruciatingly long 39 minutes with some decent exchanges, a wild cannonball spot through a table, an interminable segment on top of the cage that took me out of the match completely as I worried Shane and Owens might actually fall through and kill themselves, and two obligatory announce table spots.  Was this better than Shane's snorefest with Taker two WrestleManias ago?  Most definitely.  Did it warrant a 39-minute runtime?  Nope.  Did it reek of hypocrisy on WWE's part?  Oh yeah.  So WWE is super cautious about concussions, right?  Like that's the reason Daniel Bryan can't wrestle for them anymore?  But they're totally fine with a 47-year-old non-wrestler with his own history of concussions jumping off a 20-foot cage.  In what universe is this situation anything but a double standard?  The visual of Shane falling off something high was old in 2001.  Why do we need to book him in top PPV spots just to recycle this stunt over and over?  I could go the rest of my life without ever again seeing Vince's son almost kill himself on live TV.  This simply does not interest me.  The match itself was fine for a 25-minute main event.  But it went fifteen minutes too long and the segment on top of the cage felt like they didn't really know what to do and were just filling time.  WWE's main events lately are either way overly long or criminally short (in the case of Lesnar matches).  The days of counting on the main event as the climax of a WWE PPV seem to largely be over.  Jeezus it's depressing.


The one exciting thing to come out of this show was Sami Zayn saving Owens at the end, thus seemingly reuniting the old ROH duo.  I like the idea of the two of them running roughshod over the Smackdown roster as its two top heels.  Too bad they couldn't maybe have put the WWE Title on Owens, huh?  I'm curious who they feud with.  Owens/Zayn vs. AJ/Nakamura would certainly be something special.

So yeah, Hell in a Cell was yet another in a long line of middling 2017 PPVs.  There was a bunch of okay stuff, one very good match, and nothing that really made me care.  I say it over and over again, but thank Christ for NJPW right now.....

Best Match: The New Day vs. The Usos
Worst Match: Bobby Roode vs. Dolph Ziggler
What I'd Change: Shorten the main event (and tell Shane to stop attempting suicide), get the goddamn belt off Jinder, and I dunno, do something to make me care about it all.
Most Disappointing Match: Natalya vs. Charlotte, but hopefully the rematches will be better
Most Pleasant Surprise: AJ vs. Corbin vs. Dillinger - AJ Styles is a national treasure.
Overall Rating: 6.5/10

Don't forget to subscribe to Enuffa.com and stay up to date on all future columns!