WWE TLC Gets a HUGE Makeover

Okay this is just bizarre.  The WWE locker room has been stricken with some kind of illness, as Bray Wyatt, Bo Dallas, Jojo Offerman, Roman Reigns, and Kevin Owens have all been sent home.  What this means for Sunday is Roman will no longer be involved in the Shield main event.  Instead, and this is fucking crazy, KURT ANGLE is making his WWE in-ring return after 11 years to take his place.  And since Wyatt is also out of action, AJ Styles will now be facing Finn Balor, I believe for the first time ever. 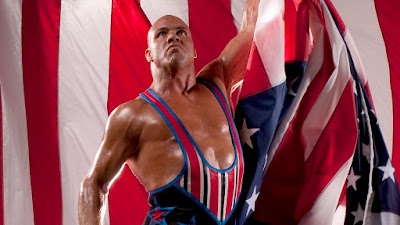 Now, while this show just became must-see for me, I am absolutely baffled that they'd just throw these two changes on this card with only two days' notice.  Kurt Angle's in-ring return should've happened at a WrestleMania, or at worst, SummerSlam.  But they're just tossing him on this show as a last-minute sub.  It's kind of a no-win situation I guess, with no TV left to shoot any kind of storyline change.  But man, Kurt Angle returning to action after literally years should be so much bigger a deal than this.  I hope they start using him pretty regularly for some of these big PPV matches now.  Christ, if Shane can get two or three matches a year, Kurt Angle can sure as shit get that many.

As for Balor vs. Styles....WWE now has a shot at a legit Match of the Year contender.  But again, the two former Bullet Club leaders facing each other for the first time in history should be saved for a way bigger occasion, when they're actually feuding.  This whole situation is just so bizarre.

I sincerely hope everyone is okay health-wise, above all.  There must be one helluva virus going around that locker room for this many people to be affected.  AJ was apparently pulled from an event last night due to stomach issues.  Pretty scary.

But with these two changes my interest in this show just increased by a factor of ten.

My prediction for the main event stays the same obviously, while I'll pick Styles over Balor.