Tables, Ladders & Chairs 2017.  This here is what you call a one-match show.  I shudder to think how completely skippable this PPV would've been had the locker room not been stricken with a case of the mumps.  Like most WWE PPVs, there were no matches one would really categorize as bad, but aside from a long-awaited debut and a long-awaited dream match you could go the rest of your life without seeing this show and it literally would not matter. 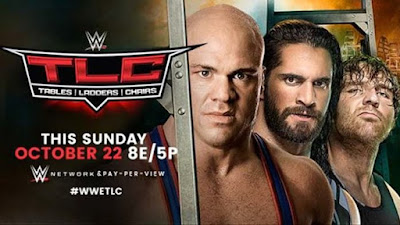 Things started off just dandy, with Asuka finally arriving on the main roster with a fairly invested crowd behind her.  She and Emma put together a decent RAW-quality match that was sadly far below their NXT TakeOver bout from two years ago.  As I said going into this, Asuka's debut match needed to be largely one-sided to establish her as something special.  Unfortunately they didn't heed my advice and Emma got in almost as much offense as Asuka did.  Also Michael Cole's line about Asuka "having fun" and being "all about entertaining" was laughably tone-deaf.  Histrionics and sadism aside, Asuka's character has never been about "entertaining."  She has fun torturing opponents the way a cat does picking apart a dying mouse.  Your cat doesn't do this to amuse you.  If this is what Vince thinks Asuka's character is about, we're already off to a bad start.  The man could literally screw up 90-second microwave rice.  Fuckin' hell.... 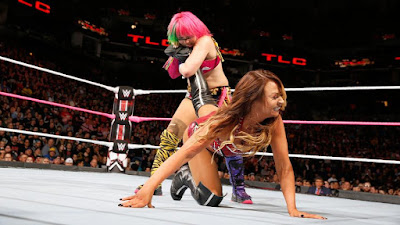 I should mention how super weird it was for a WWE PPV to begin with five matches in a row (if you include the pre-show) that were either women's or cruiserweight bouts.  Man this roster is thin.

The cruiser tag match was.....a match.  It was fine.  Everyone worked well mechanically.  I didn't care about any of it.  Jack Gallagher now wrestles in a shirt & tie apparently.  Kinda weird.

Next up was Alexa Bliss defending the Women's Title against Mickie James.  Like the opener, this match was solid and well-worked, but lacked something special to really set it apart.  It didn't help that Alexa was obviously not losing the belt here, so there was little suspense.  But this match needed a really memorable moment or three and it didn't have that.  At this point it makes sense to keep the belt on Alexa until Asuka takes it from her.  Hot potatoing the title around before then just cheapens Asuka's rise to the top.

Kalisto was next, defending his newly-won Cruiserweight Title against Vince's idea of a great 205er, Enzo.  Man, I hate to keep harping on how much better NJPW is than WWE (eh, who am I kidding, I don't hate it at all), but take a look at this drivel vs. the incredible Kushida-Will Ospreay match we saw two weeks ago.  New Japan books their Jr. Heavyweight division as a legitimate weight class, a la UFC, where a match like Kushida vs. Ospreay is a major drawing card and could easily steal the show.  WWE books their Cruiserweight division like an afterthought; something to fill time in between the matches they actually give a shit about.  Presumably most wrestling fans watch cruiserweight matches to see unique action the heavyweight guys can't give them.  Ya know, that "something for everyone" mentality WWE is always touting?  They had this formula figured out last year with the Cruiserweight Classic tournament, yet when it came time to turn this into a division again, they went back to the same dumbed-down WWE version of cruiserweight wrestling that killed the division dead in 2004.  And now we have a division centered around a mostly comedic champion with little in-ring skill.  Please tell me that when Ricochet inevitably arrives they'll make him the new face of the division and actually invest time into it.  I'm actually baffled at this point that any self-respecting small wrestler would ever sign with WWE as a cruiserweight.  The money is probably not as good as what they could make on the indies or in Japan, and it's certainly not doing their career any favors.  Oh yeah, Enzo won the belt back as expected.  What pray tell was the fucking point of Kalisto winning it in the first place?

Finally, five matches into this PPV we got something memorable, as Finn Balor faced AJ Styles for the first time ever.  This match wasn't even supposed to happen, but thanks to the mumps outbreak AJ was flown back from South America to steal the show once again.  These guys got 18 minutes and assembled a damn good showing that felt like it could be the first in a series (It better be).  They didn't pull out all the stops but they did an admirable job of capturing the imagination and getting enough of their signature spots in (The Styles Clash was noticeably missing and AJ also failed to hit a top-rope Phenomenal Forearm).  There wasn't any big storyline - it was all about seeing who was better, and sometimes that's all you need.  Balor got a decisive, clean win with the Coup de Grace, and it felt like he was being set up for something pretty major.  AJ on the other hand was sorta protected by the fact that he flew all night to get to the show.  This wasn't quite a MOTY candidate, but in the world of WWE it was (Jeezus this company has had precious few of those this year), and it's the only must-see thing on this show. 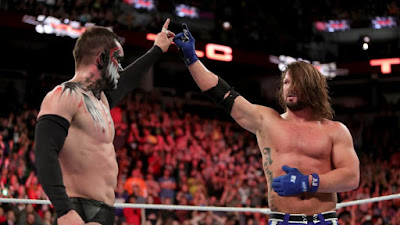 WWE of course threw in a "bonus match" in between the two important bouts, because we can't have a main event without bringing the crowd down first (I will never, ever understand this practice).  Jason Jordan and Elias Sampson had a filler bout that ended with Jordan winning with a rollup and Elias sorta getting screwed by the ref (He seemed to kick out but it was still ruled a three-count).  Jordan is so much better than this.  Making him Kurt Angle's son was such a stupid move and it's gonna take a heel run for the crowd to be into him again.

Now for the main event.  Jeezus H. Christ this was a clusterfuck.  It reinforced why I hate handicap matches, it reinforced why I hate most car wreck matches, and it was seemingly all just an elaborate setup for a Strowman vs. Kane feud.  Ambrose, Rollins and Angle dominated the early parts of the match, leading to a double-table spot where Ambrose and Rollins each dove onto one of the big guys.  This left Angle all alone against Miz and The Bar, he got put through a table and taken away, and then we got an interminably long twenty minutes of the five heels beating the crap out of Ambrose and Rollins.  Why didn't anyone go for a pin during all this?  There were long stretches where it felt like no one knew what to do next.  It's like the agents didn't bother coming up with a match structure.  At one point Kane accidentally hit Strowman with a chair, which would've been the perfect time for Strowman to turn on his team.  Instead Ambrose and Rollins attacked all of them as they were squabbling, making Kane and Strowman forget they were about to fight.  This led to much more 5-on-2 nonsense, Miz had a garbage truck wheeled in with the intent of dumping the tag champs in it, but they escaped and continued fighting.  Finally Kane turned on Strowman (the logic of this escapes me - surely these two should've come to blows in the aforementioned moment, not fifteen minutes later when cooler heads have obviously prevailed) and his teammates followed suit.  Strowman got put in the garbage truck and Miz ordered the driver to compact him.  Umm, who did he hire to operate this truck that was totally fine with murdering a person?  Especially when it was originally intended for Ambrose and Rollins.  And how do they justify Strowman surviving this?  He'd be 1000% deceased.  Finally Kurt Angle returned to save the day, Angle-slamming Sheamus and Cesaro while Ambrose and Rollins speared Kane through the dasher boards.  That left only The Miz, who took all three finishers and a Shield triple-powerbomb to mercifully end this flim-flam. 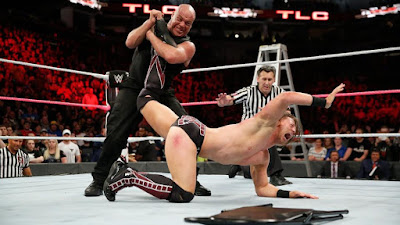 WWE's main events this year have been embarrassing.  They've pretty much all been either pointlessly short Brock Lesnar "fights," pointlessly long trainwreck matches with dozens of table spots and stunts we've seen done better thousands of times before, or totally forgettable, rudimentary twaddle involving Jinder Mahal.  Can we just get strong one-on-one main events without convoluted gimmicks?  I legit have no further interest in seeing all these belabored, bells & whistles-laden spotfests with nothing holding them together.  Again, it makes me laugh when WWE diehards dismiss New Japan matches as spotfests.  What was this main event aside from a series of stunts in between long stretches of stalling?  It's ironic that Kurt Angle's return to the ring was a match with basically no real wrestling.

Anyway, if you haven't watched TLC, just watch Balor vs. Styles and skip the rest.

Best Match: Finn Balor vs. AJ Styles
Worst Match: Kalisto vs. Enzo
What I'd Change: The main event should've been three-on-three and 25 minutes tops.  Asuka's match should've been a five-minute blowout so she'd come off as a killer.  Aside from that I dunno how you save a show with such a thin roster.  This show really didn't need to happen at all.
Most Disappointing Match: The main event
Most Pleasant Surprise: Ummmmmmm
Overall Rating: 4/10

Posted by Justin Enuffa Ballard at 11:52 AM