Oh for Chrissake, you had to go and add Kane??  Kane, who debuted 20 years ago and hasn't been relevant in years?  WWE really is desperately clinging to The Era of Part-timers, aren't they? 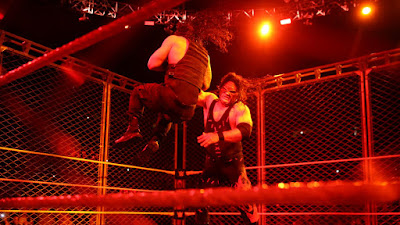 For those of you who missed it, last night The Big Red Quintagenarian returned to RAW (despite having been drafted to Smackdown last year - great continuity guys), interfering in the Roman Reigns-Braun Strowman cage match and allowing Strowman's TLC team to add a fifth member, which of course will be Kane himself.  So now the TLC main event is 5-on-3.  I hate handicap matches.  My hate for them is directly proportional to how lopsided they are.  So now I hate this main event by a 1.67:1 ratio.  Can't we just have The Shield vs. Braun & The Bar?  Is that too simple a plan for you people?  Why must WWE excessively window-dress every good idea they have?  Does adding two guys to the heel side honestly give anyone pause that The Shield will undoubtedly emerge victorious on Sunday?  There's ZERO chance the company put these guys back together just to have them lose their first reunion match, so why possibly ruin a potentially great brawl by adding too many men on the field?  Like, what are the two extra dudes supposed to do while the other six are fighting?  And how weak does that make the five guys look when they lose to three?  And who at this point is the least bit intimidated by Kane?  I'm pretty sure I'VE beaten him several times over the years.  And isn't he running for Mayor?  Who's got time for pretend fighting when you're busy pretend-politicking?  And hold on, The Demon Kane is going to be on the same PPV as The Demon King.  Does that mean Finn Balor has authority over Kane?  Can't he just order him not to get involved?  I'm just really confused now....

TLC has a pretty thin lineup.  Only the Women's Title and the Cruiserweight Title are on the line, Lesnar's not on the show, and the I-C and Tag Champs are in the TLC match.  This is basically a four-match show, plus two throwaway Cruiser bouts.  Kalisto-Enzo isn't gonna be much to watch, and does anyone care at all about Kendrick/Gallagher vs. Swann/Alexander?  You know that's getting shoved in the death spot before the main event.  I truly do miss the days when there wasn't a PPV every two weeks.  This is like a mainstream network TV series, where they're obligated to fill 22 episodes every season so nothing substantial happens for 15 of them.  Nothing to see here, just filling time. 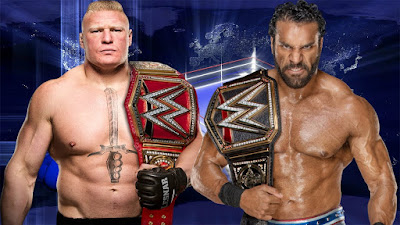 Rumor has it that the planned main event of Survivor Series will pit the Universal Champion against the WWE Champion.  What a huge main even-- oh wait.....it's Brock Lesnar.....vs. Jinder??  Seriously?  I guess they needed a way to top the pointlessness of last year's Survivor Series main event?  So lemme get this straight - we still have not seen Lesnar vs. Kevin Owens, Lesnar vs. Cesaro, Lesnar vs. Sheamus (except at a non-televised house show), but Jinder gets a match with him?  Sweet Jeezus, Vince.  Stop trying to make "fetch" happen with this guy.  It doesn't work, it's never going to work, let it the fuck go.  Attendance is down, ratings are down, and most importantly, business in India is down.  India - the whole reason you pushed Jinder in the first place.  They didn't fall for your obvious bit of pandering.  Pull the plug on this DOA experiment.  So what's the endgame here?  Lesnar steamrolls Jinder just like everyone else?  How weak does that make the WWE Champ look?  I mean even moreso than he already did?  The damage they've done to the WWE Title this year has been unfathomable, between hotshotting it all over the place from January to May, to never booking it in the main event of Big Four shows (or Smackdown-only shows for that matter), to letting the least-deserving champion of all time keep it longer than just about anyone else in the past decade (Seriously, I think Jinder's ranked #4 in the 2010s), that strap is about the most worthless belt in the company aside from the Cruiserweight Title.  John Cena's gonna need to win it again and do the Open Challenge thing.  One can only hope the rest of Survivor Series is set up like last year, with stacked elimination matches taking up the bulk of the show.

What a downer of a column.  Sorry guys.  Anyhow, stay tuned later this week for our TLC predictions.  And don't forget to join our new Enuffa.com Facebook group, located HERE.


Posted by Justin Enuffa Ballard at 10:23 AM