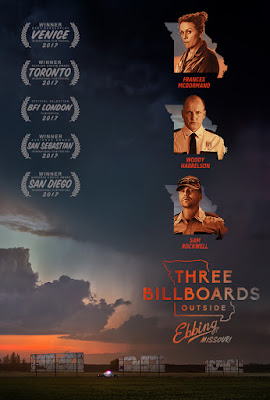 At the risk of sounding imprudent, I think the Best Picture Oscar for 2017 has been decided, in my mind at least.  I still have a lot of catching up to do with the current crop of Oscar bait movies, but I frankly can't fathom a 2017 film outshining Three Billboards Outside Ebbing, Missouri.  Martin McDonagh's black comedy powderkeg is a Coen-esque masterpiece, boasting an absolutely stacked cast, a sardonic, brutally frank sense of humor, multiple knife-twisting plot turns, and maybe most significantly a career highlight lead performance from Frances McDormand.  Sweet Jeezus this movie's brilliant.

Three Billboards concerns a divorced mother, Midred Hayes, whose daughter Angela was raped and killed months earlier, now outraged that the murderer has still not been found.  She rents out the titular billboards near her house, asking the local sheriff (a compelling-as-always Woody Harrelson) why he hasn't done anything about it.  This throws the town into an uproar, as Mildred's ad campaign is seen as an attack on law enforcement, and the pressure is on to solve the case but also to punish Midred's impudence.  What follows is a contentious, often violent power struggle, during which we're treated to one unforgettable scene after another and introduced to numerous memorable characters.  There's the dimwitted loose cannon Deputy Dixon (an Oscar-worthy Sam Rockwell), who's already been accused of torturing black suspects, or Mildred's abusive ex-husband Charlie, who sides with the police and blames Midred for Angela's death, or Red, the mealy-mouthed advertising agent from whom Mildred rents the billboards and who the police pressure to revoke her lease.  It's rare to find this deep a roster of supporting characters.

I won't go into much more plot detail than that; part of the joy and sadness in watching this film lies in the numerous surprises.  The story does not at all unfold the way one would expect, the script finds laughs in some very unexpected places, and high tension between characters is conjured before you even know what hit you.

Thematically the films deals with the senselessness of tragedy, our powerlessness in the face of it, and both the destructiveness and effectiveness born of carrying around all that anger.  Mildred is a pillar of righteous rage, bringing to task a local police force that seems too busy harassing local citizenry to be interested in solving her daughter's murder.  In her mind she has nothing left to lose, which manifests as a pervading aura of anarchic free will.  No matter what the police or anyone else threatens her with, she is not in the least bit intimidated.  Mildred acts the way we all wish we could when confronted with injustice; her anger gives her incredible power.

There's nary a misstep in the performances either.  Sam Rockwell nearly steals the show as the loathsome, degenerate Deputy, revealing sympathetic character traits that confound expectations.  Harrelson as Police Chief Willoughby could've been a villainous hick caricature, but instead is both authoritative and reasonable.  John Hawkes as Charlie is hardened and frightening, a violent bastard of a husband.  And McDormand.....Frances McDormand's terse, internalized performance is awe-inspiring and may be the best of her career.

Martin McDonagh has amazingly taken seemingly divergent narrative tones and woven them together to make a uniquely hilarious, unnerving, heartbreaking film.  If there's a better movie than Three Billboards in 2017 I can't wait to see it.

Thanks for reading - join us on Facebook by clicking HERE.