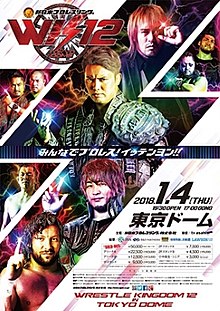 3, Koraku 1-chrome, Bunkyo, Tokyo Japan
The Home of the Japanese Baseball Hall of Fame, and the Yomiuri Giants
42,000 seats
The Big Egg
The Motherfucking Dome.

January 4th is around the corner. The culmination to a year of storylines brings us back to Tokyo.  We've seen Young Lions Return completely changed, cried together as someone fought for his life, been amazed (and some appalled) as a foreigner came in and fired the first shot in his war, and the stage is set to pay off what's my pick for the greatest redemption story in Pro Wrestling this Millennium. Every title in New Japan's power is on the line, with one non-title match, and only one schmozz with nothing behind it. It looks to be,  I'm sure this has been said every year for a while now, the biggest and most important Dome show to date.

Landon: Sho and Yoh came back late this year, and shocked the system in the Junior Heavyweight scene. Winning the titles in their first match back, and in their next three bouts as a team, won the Super Jr. Tag Tournament. Now we have the biggest challenge of their run, The Young Bucks. This match could go either way, seeing how much everybody fawns over Matt and Nick, but I hope it ends up being Roppongi 3K defending. It could be a capstone to a solidifying moment that makes them the new, hot, domestic team, which is something this company needs bad.

Justin: Another clusterfuck gauntlet for the 6-man straps.  This set of belts is quite meaningless now, to the point that LIJ more or less had to lose them in order to go for the real tag belts.  It also bugs me that Tomohiro Ishii has nothing better to do, for the second year in a row, than be in a multi-man schmozz.  But whatever, this is the only potential throwaway on the entire PPV, so I'm not that upset about it.  War Machine is apparently WWE-bound (Goddammit), so they aren't winning here.  Any of the other teams could walk away with the belts.  These matches almost never favor the champions, but I could see them retaining.  Keep 'em on Bullet Club Team Tonga.

Landon: You wanna talk about a throwaway match? About wasting someone? We have Kota Ibushi, at Wrestle Kingdom, and we have him in a singles match against Cody, for no purpose or reason. Now, I knew Dalton Castle was gonna take the title at Final Battle, cause ROH knows how to book their climax shows. So I was hoping for Ibushi vs. Dalton, which would have been fucking awesome. But we have what we have...Ibushi wins.

Justin: Welp, this match is no longer for the ROH Title, which is probably a good thing, given how little time the ROH Title matches have gotten at previous WrestleKingdoms.  Plus it now allows for the possibility of a much-needed Kota Ibushi Dome win.  This guy's been coming up short left and right lately.  Give him a win here and have him challenge Jay White later on.

Landon: Remember what I said about SHO and YOH being the domestic tag team the company needs? EVIL and SANADA can be the same way, for the heavyweights. In the tradition of two native babyfaces fighting off a slew of foreign villains (Lion's Pride is a really good book, guys), we have the makings of the next great heavyweight team being crowned here. LIJ takes the titles here.

Justin: This is probably the most excited I've been for a Dome Tag Title match.  Evil and Sanada winning the World Tag League was absolutely the right move, and giving them a run with the top tag belts is as well.  This should be the company's new centerpiece tag team for a while.  The singles ranks are very crowded, while the heavyweight tag division has been thin for years.  LIJ for the win.

Landon: YOSHI, Yano, and ishii are all members of CHAOS who have lost their hair in lucha de apuesta, so Goto's chances don't look good. I think Suzuki defends here.

Justin: Supposedly this match will not include the usual SG interference shenanigans, so it should be a helluva fight.  I have to think Goto finally wins back the NEVER belt, but I'll be sad to see Minoru's signature coiffe go.

Landon: This is gonna be all action and bodies are going to fly everywhere. Who wins it? Fucking I don't know. I agree with Justin below, KUSHIDA is out. The CHAOS backer in me wants Ospreay to win the title back, but my usual gut instinct is that champions should survive multimans. I'll put my money on Marty retaining.

Justin: This is probably the hardest match to predict.  Scurll just won the belt in November, very unexpectedly, but he could easily lose it here too.  I'd say of the four guys involved Kushida is probably least likely to walk away with the title.  They built up Takahashi's challenge for months, so he could win it back.  Or Ospreay could regain the belt he so unceremoniously lost in his first title defense.  Or Scurll could just keep it.  I dunno.  Fuck it, Scurll lives to fight another day. 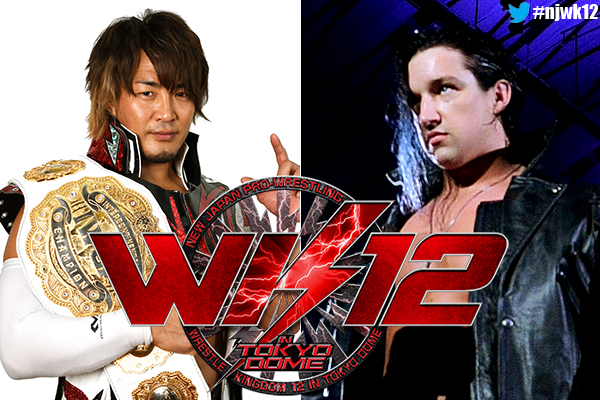 Landon: This should be Kota/Jay. Especially now that the match with Cody is now filler, and with Tanahashi working with an arm held together by duct tape and a song. Hiroshi will, however, fucking kill himself to get a good match out of himself. Jay has a lot of potential being a loner, alone, with no faction. All I gotta think is, poor David Finlay.

Justin: I'm very excited to see Jay White as a full-fledged New Japan star.  He impressed me tremendously as a Young Lion and now has the chance to be a major asset to the company.  The fact that he's almost certainly winning the second-biggest title right after returning signals a huge vote of confidence as well.  Switchblade for the win.  This match should be tremendous.  Tanahashi MUST take time off after this. 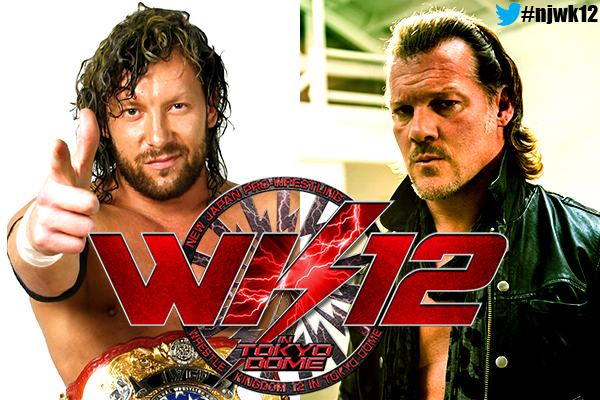 Landon: It's been 17 years since Jericho's worked for anyone outside of WWE. I don't know how well this match is going to go, honestly. I know that's a negative view on things, but I'm cautiously pessimistic about the whole affair. Jericho may not have the gas to go as fast or as hard as the audience will want it to, but I think that if he goes full steam ahead it'll end up being a great match. The No-Disqualification ruling makes me more optimistic that Smoke and Mirrors will help Kenny along to a successful title defense.

Justin: Omega-Jericho has the potential to be one of NJPW's biggest-ever crossover matches.  A near 20-year WWE veteran jumping ship to New Japan is something I never thought I'd see, but it's a great way to kick off what promises to be New Japan's most successful year in terms of attracting a western audience.  I hope this isn't a one-and-done deal for Jericho, as there are numerous dream matches the company could cash in on over the next several months.  We know Jericho will not be at WrestleMania 34, so a WWE return is definitely not happening in the immediate future.  This should be a wild one.  Omega retains I think. 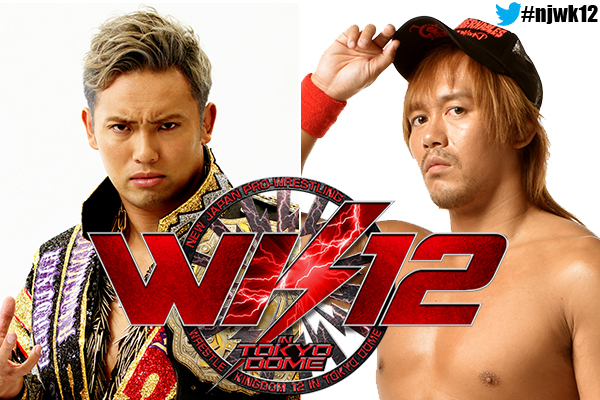 Landon: I'm gonna say for the record, that this is the Main Event. Main. Singular. The One and Only. This has been a story four years in the making for Naito, in what might be the most organic and gradual build towards a mountaintop I've ever seen in my time as a fan. After Naito beats Okada for the title here, the Ace can take a nice, month long rest in the hyperbolic time chamber and not be responsible for the company anymore. I wish I had more to say here, but I've spent weeks debating Naito, this match, and its place as main event to people. I have nothing left to say. Justin?

Justin: Omega-Jericho may be the big crossover attraction, but for the NJPW loyal, Okada-Naito is the company's biggest match.  Four years in the making, this will be a resolution to Naito's first attempt at a main event run, when he was rejected as a snow white babyface and had his IWGP Title match literally voted out of the main event slot for WrestleKingdom 8.  A much-needed character retooling then made him the company's hottest anti-hero, and now the fans are ready to embrace a real run with the Title (notwithstanding his two-month championship stint in 2016).  This has the potential to be in the same conversation with the trilogy of Tanahashi-Okada WK main events.  Epic storytelling and memorable action.  This will likely be the end of one of the greatest title reigns in wrestling history, as Okada puts an exclamation point on the last 500+ days.  What a magnificent champion he has been, and will be again.  But now is the start of the Naito Era.  New IWGP Champion: Tetsuya Naito.

WrestleKingdom 12 will almost certainly be an instant classic, continuing the trend of Dome PPVs proving impossible for anyone to top.  The last three editions have each been my favorite PPV of their respective years, and I see that happening for the fourth consecutive year.  Enjoy the show!  Thanks for reading, and don't forget to join us on Facebook by clicking HERE.