Well.  That show took some unexpected turns, didn't it?  Like The Last Jedi, WrestleKingdom 12 left more than a few people scratching their heads, as what seemed a slam-dunk main event result ended up not happening.  Ya know what though?  I'm puzzled by it, but I'm not sad about it.  More on that in a bit.

New Japan's flagship PPV is in the history books, and all told it was one helluva good show.  The nine matches on the main card ranged from inoffensive to pretty awesome.  While WK12 lacked for me that one blowaway match, it was a newsworthy show with a ton of variety (in the same way the WK9 card had lots of different match types), and while a bit of an endurance test (The shortest bout was over 14 minutes), never got boring (unlike WrestleMania cards these days).  There was no intermission and the matches were presented one after the other without a lot of wasted time in between.

The show kicked off with the Jr. Tag Team Titles, as RPG3K defended against The Young Bucks.  The match, like its WK11 counterpart, was much more psychology-based than your average Jr. Tag match, as the Bucks and Sho/Yoh waged a war of attrition, one man from each team selling a back injury.  I especially liked the exchanges where Nick and Sho took turns kicking the injured backs of their respective opponents.  This match got a robust 18 minutes before the Bucks hit Yoh with the Meltzer Driver and finally tapped him with a Sharpshooter.  The ending felt a little flat to me but otherwise this was a fine opening match.  I assume RPG3K will chase the belts for a few months before regaining them.  I'd like to see the Bucks move up to the heavyweight tag division after that. 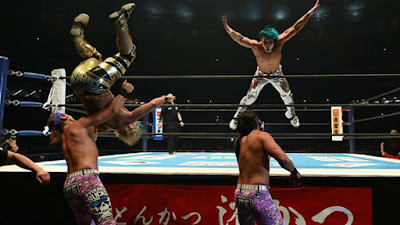 Next up was the one skippable match, the 6-man gauntlet.  This was mostly pretty nondescript but also inoffensive.  The first segment involved Suzuki-Gun against War Machine and Michael Elgin.  This had some fun exchanges and ended in roughly six minutes with Zack Sabre causing Rowe to pass out with a leg scissor.  Ishii/Yano/Beretta then made quick work of SG when Yano rolled up Taichi for the pin forty seconds later.  A few minutes after that Yano pinned Taguchi with another rollup.  Finally the champs, Fale and Guerrillas of Destiny arrived and had the longest segment of the match, looking pretty dominant for a while but ultimately losing the straps as Beretta polished off Tama Tonga with a Dudebuster.  So new six-man champs as per usual.  Again, this match was skippable but fine for what it was.  If this is the worst thing on your PPV, you've put together a pretty damn good PPV.

From here on out it was a block of seven good-to-excellent matches, starting with an unexpectedly strong Cody-Kota Ibushi bout.  Cody and wife Brandi Rhodes played the heel power couple to the tee (Cody is very obviously having so much more fun than he ever did in WWE), including a spot where Ibushi dove on top of Cody but accidentally knocked Brandi over as well.  Brandi sold the move, taking advantage of Ibushi's chivalry and allowing Cody to take over on offense before revealing she was feigning injury the whole time.  The match built in intensity over its generous 15 minutes, until Ibushi (who took some nasty offense including a CrossRhodes off the ring apron) came back to hit his Kamigoye, followed by a picture-perfect Phoenix Splash for the win.  Great to see Ibushi finally pick up a victory on the big stage and I'm interested to see where 2018 takes him (Hopefully a long-awaited collision with Kenny Omega is on the horizon).  This was a damn good undercard match and both guys came off great. 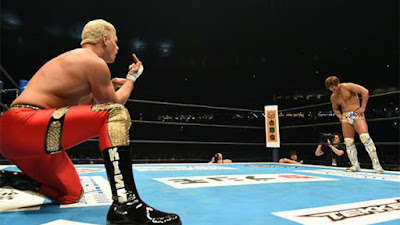 Next up was one of the best heavyweight tag title matches in WrestleKingdom history, and the best Killer Elite Squad match I think I've ever seen.  KES nailed the Killer Bomb on Evil immediately, teasing a seconds-long win, but Sanada broke it up and the first half or so involved the dominant KES destroying Evil and Sanada.  It was odd to see LIJ playing such traditional underdog babyface roles, but equally as stunning was just how much KES dwarfed them.  Evil and Sanada are not small men, but Archer and Smith towered over them.  This match told a great story and the late-match title-winning comeback by LIJ really felt earned.  Hella good stuff here.  This feud needs to continue for a few months.

The hits kept coming with a brutal NEVER Openweight bout between Minoru Suzuki and Hirooki Goto.  Suzuki took control early, nearly putting Goto away with a hangman choke, and he dished out the lion's share of punishment throughout.  Goto took a vicious beating, enduring a barrage of palm strikes late in the match that swelled up one of his eyes.  After eighteen brutal minutes, Goto hit a pair of GTRs for the win, the title, and Suzuki's hair.  Suzuki, ever the pillar of machismo, refused to welch on the bet and also refused to give Goto the satisfaction of the shave, shearing off his own hair and walking away.  This was the best NEVER Title match since last year's WK.

The opening Jr. tag may have cut a fairly tempered pace, but the Jr. Title 4-way was balls to the wall action, as Marty Scurll, Will Ospreay, Kushida and Takahashi each displayed their incredible athleticism.  The big story in this match was Scurll vs. Ospreay, and the announcers hammered home the point that throughout their years-long rivalry, Scurll has always had Ospreay's number.  That came into play multiple times here, as Ospreay would attempt a move but Scurll would always counter it.  All four guys got ample time to shine though, with Kushida countering a couple top-rope moves into arm breakers, Takahashi nailing the Time Bomb multiple times to almost capture the title, and Ospreay finally hitting the Oscutter on Scurll for the title win.  Perfect slot on the card for this kind of match and it was everything you'd want from a crazy spotfest. 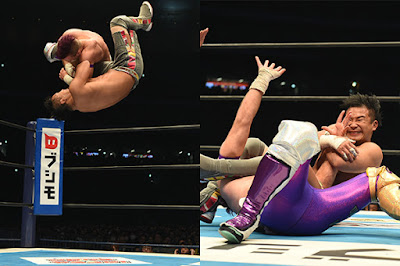 Now we arrived at the big match trilogy, starting with Hiroshi Tanahashi vs. Jay White.  This match was....underwhelming.  Besides not being Jay White's big moment, as he failed to unseat Tanahashi, there was something lacking in the energy.  I feel like White's offense wasn't nearly as diverse as it was during his Young Lion stint, and it made the match seem less memorable than it should have been.  I'm also shocked Tanahashi STILL isn't taking time off for that arm.  Who takes the belt from him??  Anyway, this match was fine, but nowhere near as good as we all expected.  Tanahashi retained with the Hi-Fly Flow and it looks like White is moving on to challenge Kenny Omega (which actually might be a better pairing to get him over).

The final two bouts each clocked in at around 35 minutes, and picking a Match of the Night between the two is a little difficult.  They were very different matches but both delivered.  Kenny Omega vs. Chris Jericho was a car wreck of a match, featuring big, brutal high spots and plenty of palpable animosity.  I was amazed how much time this got and how many false finishes there were.  The action ranged all over the ringside area, including a missed Omega top rope dive onto the English announce table (which put Kevin Kelly and Don Callis out of commission temporarily).  This was one of Jericho's best matches in years and his chemistry with Omega was off the charts.  The match was full of creative spots and gasp-inducing moments.  Omega retained after the second One-Winged Angel of the match, much to the delight of the Dome crowd.  I'd give this the Match of the Night nod, just by a hair.  What a spectacle. 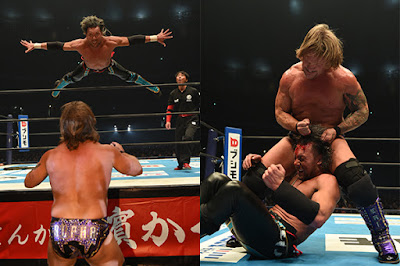 The Okada-Naito main event was roughly what I expected, a slightly lesser version of Okada vs. Tanahashi, until the finish.  These two started out slow, weaving a classic pro wrestling main event with lots of big moves and storytelling, and in the end it was the final ten minutes or so that really made the match for me, as both men kicked out of each other's finishers before Okada shockingly retained with the third (I think) Rainmaker of the match.  The Dome audience was very solidly behind Tetsuya Naito, so I'm honestly kinda baffled they didn't finally pull the trigger on him.  If I had to guess, I'd say we see a repeat of this match in a year, and Naito wins that one.  But this crowd definitely banked on their anti-hero dethroning the greatest wrestling champion of the past thirty or so years, and somehow didn't get it.  As I said, I'm not sad about this result, as I've never been the biggest Naito devotee, but where does Okada's legendary reign possibly go from here?  Does he lose the belt to Omega for a while?  Does he keep it for ANOTHER full year?  Who knows?  Gedo's booking is almost always right on target so I have faith he knows what he's doing.  But damn.  Naito fans must be super disappointed right now.  Side note: It occurred to me after this match that aside from the tag team main event from WK1, which really shouldn't have been the main event, only three men have won WrestleKingdom main events, ever: Hiroshi Tanahashi, Shinsuke Nakamura, and Kazuchika Okada.  Side note 2: I hope those Shawn Michaels-style pants Okada was sporting were a one-time thing.  They looked just wrong on him and it was actually distracting.  Anyway, a really good main event, if slightly short of great. 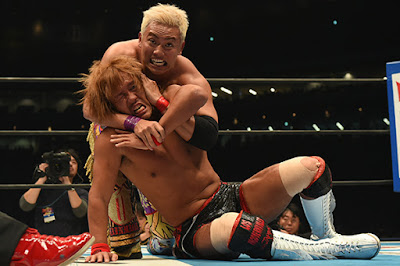 WrestleKingdom 12 was an excellent PPV that for me was only missing the one (or two) five-star masterpiece the previous three WK shows had.  A fine pair of main events capped off a diverse set of highly engaging matches (each of which got ample time) and this show continued the tradition of hard-to-follow New Japan PPVs.  This gets a very easy recommendation.

Best Match: Kenny Omega vs. Chris Jericho
Worst Match: The Six-Man Tag Gauntlet, which was fine
What I'd Change: I mean, I'd probably have given Naito his crowning moment but NJPW's booking has always been about the long game as opposed to instant gratification.  Still, this match was four years in the making; you can't get much more long-game than that.
Most Disappointing Match: Tanahashi vs. Jay White, which was good but not great
Most Pleasant Surprise: Okada's incredible Title run continuing
Overall Rating: 9/10 - This was a notch below WK11 for me, but a notch above WK8.  That New Japan has delivered six consecutive 9/10-or-better WrestleKingdoms is staggering.