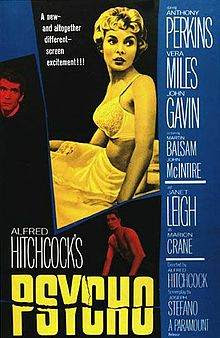 This was it. The big one. The very first horror movie I ever saw in my life. Psycho. I watched it at my Aunt's house on the Movie Loft with Dana Hersey on WSBK TV 38, Boston. And it scared the bejesus out of me. The requisite "no more showers" was promised by myself, and I'm quite sure I held onto that pledge for a solid week.

The plot, of course, involves Norman Bates and his eponymous hotel. When Marion Crane, who is on the run after robbing her boss of $40,000, checks in, she meets this strange boy who has an even stranger infatuation with his little-seen mother. Mother resides in the creepy house overlooking the hotel, and if I thought the hospital in Session 9 was scary, check this shit out.


The movie is iconic for a myriad of reasons. The house. The hotel. The music. The still-scary-to-this-day shower scene. And of course, Mother.


The performances of Anthony Perkins and Janet Leigh are subtle yet totally nuanced. Their sitdown in the parlor of the motel is such an interesting scene. Leigh shows palpable sympathy for this weird, beaten down mama's boy. But she's also totally thrown off by his strange behavior. I've always loved this scene. It's so interestingly acted and the dialogue so odd at times. It's always left me wanting to hear more of what these two ships passing in the night may have said to each other.

Alas, it's not to be. Nope, there's murders, hiding bodies, and cross-dressing! Sure, that's your average episode of the Kardashians nowadays. But back in 1960, truly groundbreaking stuff.  It still holds up today.  It's an excellent character study with one of the best plot twists of all time. A truly great film.

THE GOOD: Perkins star-making turn as the truly disturbed Norman Bates. He's excellent. To this day, there's plenty of scares left in this black & white classic. I still get chills from the overhead scene in the house with Detective Arborgast.

THE DUMB: Evidently, in some circles this is looked upon as some sort of campy film, what with the movie's final revelation and Perkins coming out as gay decades later. I don't see any campiness, honestly. I see a frightening portrayal of a seriously disturbed and scary individual. No laughs, nothing but fear.

HIT OR SHIT?: Is there any question? One of the all time greats.
Posted by Justin Enuffa Ballard at 9:22 AM