Here we are, the final reviews.  Join the discussion on Twitter with #31Movies31Days 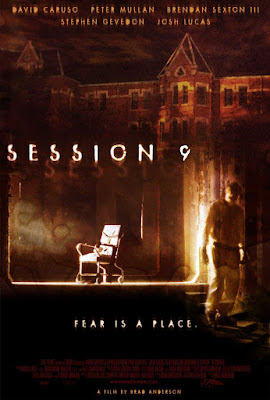 New shorts. That's what you'll need after watching this one.

The movie's plot involves an asbestos removal company doing a job in a dilapidated mental institute. And the place looks real nice. Honestly.


Strange things start to occur once the crew gets in the building. One of the workers starts listening to old reel-to-reel session recordings, adding an even creepier layer to the happenings and the goings on. To tell more of the plot is not fair to the new viewer. Needless to say, you'll be scared.


Every actor in this movie does a great job, but the real star is the building itself. Holy SHIT that thing is creepy. The movie was shot entirely on site, in the current condition the building was in. My God, I woulda quit the second they showed me the place. The whole place is frightening, and it being in Danvers, Mass, which is like 10 mins from my house, scares me even more. Sure, the hospital was demolished to make way for condos, which promptly BURNED THE FUCK DOWN, but no, it's not haunted, at all. I don't even believe in that haunted, ghost hocus pocus nonsense, but this one place leads me to believe it's all real. I mean, when you knock down an asylum and leave only underground tunnels and the goddamn cemetery where they buried THE MENTALLY ILL, what could possibly go wrong?

If you walk away from this movie and you're not scared, I'd invite you to eat shit and die, because you're a liar. This is top 5 scary movies I've ever seen. One of the most haunting, eerie films I've watched. Fear is a place, as the poster says, and it's featured prominently in this movie.

THE GOOD: The performances from all members of the cast. The scares are legit, and none of that stupid jump scare crap.

THE BAD: The narrative falls apart at the end. They try to wrap it all up in a twist you should've seen coming. It doesn't take away from everything that comes before it, it's just not that good of an ending.

THE DUMB: Taking a job removing asbestos in a demonic asylum. Be better.

SHIT OR HIT: Hit, all day, all night. Don't watch this at night. Or alone.
Posted by Justin Enuffa Ballard at 9:42 AM