Welcome back to Enuffa.com PPV Predictions, where I dissect the upcoming NJPW Power Struggle show! 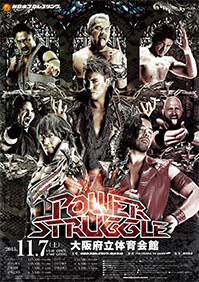 We've arrived at what is essentially the final stop on the Road to WrestleKingdom, where things fall into place for the company's January 4th extravaganza.  As in previous years, Power Struggle is a pretty basic collection of matches not really designed to have lasting ramifications, but to warm everyone up for WK10.  Let's take a look at the scheduled bouts.

This show will contain several get-more-names-on-the-card matches, the first of which is this eight-man tag.  Many of these guys opened King of Pro-Wrestling as well.  Team Liger won that match, and I'm picking them here too.


The first of three multi-man tags involving the Bullet Club, this pits the stable's bottom echelon against former Never Champ Makabe and his two partners.  Coming off a loss at KOPW I imagine Makabe gets a bit of rehabbing in this match. 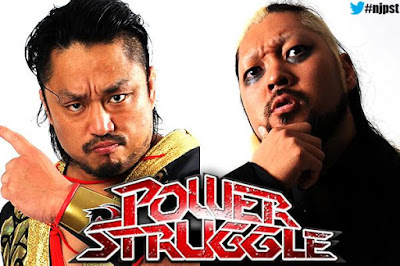 Naito's sidekick Evil (Takaaki Watanabe) makes his in-ring return in NJPW, taking on the man he attacked last month, Goto.  With Naito briefly out of action, Evil will be representing his new boss, so I'm picking him to get the duke, leading to a possible Naito-Goto showdown at WK10. 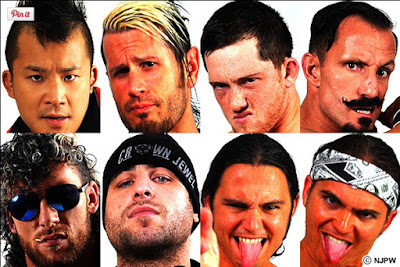 This one should be all kinds of fun.  The Jr. Tag Champs, the IWGP Jr. Champ, and the NWA Jr. Champ all in the same match.  This will be full of impossibly furious action and I assume will set up a reDRagon-Bucks rematch at WK, plus an Omega-Kushida (or Shelley) Title match.  I like the reDRagon/Splitters team here.

Another potentially awesome tag match, this one decides the 2015 Super Jr. Tag Tournament.  Matt Sydal has looked great since returning to the ring, and Ricochet is always incredible.  I like the new makeshift team here and I'd love to see them go after the IWGP Jr. Tag belts.

This feels like a "Give AJ something to do" kinda match, but it does establish AJ as an enemy of Chaos, hopefully leading to Styles vs. Nakamura at WK.  AJ and Fale have to win here. 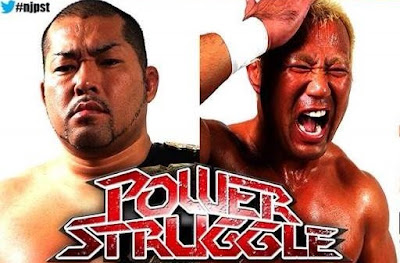 This should be fantastic; Ishii and Honma met in February to determine a new Never Champion after Makabe got hurt, and the match was amazing.  It's great to see Honma getting any kind of push, and Ishii can always be counted on to deliver big.  I don't see Ishii losing the Title so quickly, so he retains here on his way to an even greater challenge at WK (Shibata maybe?). 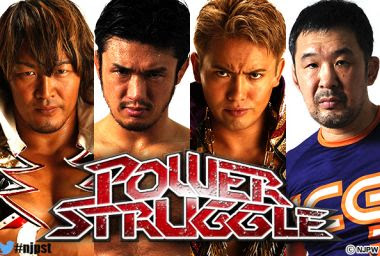 I'm upset that Kota Ibushi got hurt (He'll also miss WK10), as this tag match had all the potential to steal the show.  Still, Shibata is a very worthy sub and this could/should be a highlight, especially given its semi-main event slot.  This is all about setting up WK10's main event.  I gotta think Tanahashi gets the win so as to present more of a threat to Okada. 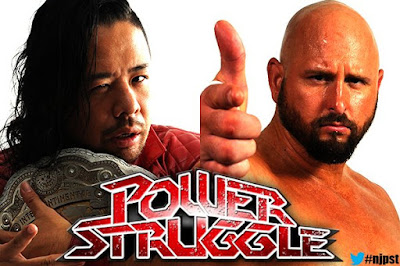 While I'm still a little disappointed Nak won't be going after the World Title just yet, it is great to see him once again brandishing the #2 belt.  I can't imagine a scenario for WK that doesn't involve Nak vs. AJ.  They'd be absolutely insane not to give us that long-awaited match as the semi-main.  Karl Anderson is a worthy in-ring talent, but he's not winning here.


Well, Power Struggle won't likely win any PPV of the Year awards, but it should be a nice little appetizer to hold us all over until the big show in January.  Hopefully we'll see some real gems on this card.  Enjoy the show!
Posted by Justin Enuffa Ballard at 12:18 PM