This is honestly getting ridiculous. I lose a pick on a goddamn "inadvertent whistle" play?? What is this world coming to? This is beyond annoying. Tom Brady is in bounds and throws a beauty to Danny Amendola, and TWEEEEET whistled away for...something. I mean, look at Danny boy here, on his way to the promised land. 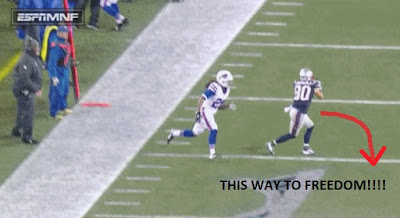 St. Louis (+9) @ Cincinnati THE PICK - CINCINNATI
It’s a pretty bad look when your quarterback’s head gets slammed into the ground like Greg Hardy’s woman and he is still allowed to play, somehow.

The NFL would have you believe that they care about the well-being of their players. That concussions are something they are actively trying to prevent. As evident in last week’s game, surely they jest. And with the Rams deciding that hey, Marshmallow-brains here is good to go this week...I’m on the Red Rifle and the cats to take this one down.


Buffalo (+6) @ Kansas City THE PICK - BUFFALO
I think the world has to calm down on how good the Chiefs are. They win a few games, and I’ve read articles about how they’re gonna win a wild card and possibly go deep into the Playoffs. Let’s pump the brakes. They’re playing better, but it’s still the old lipstick on a pig analogy. It’s like throwing Cuddy in a suit. He’s still a disgusting blob underneath his Alibaba 2-for-1 suit special. But I’m solely on the points in this one. I think KC can win, but Buffalo just played the best team in the league real close-like. I think they can keep it close here as well.

DAN'S DYNAMITE PICK OF THE WEEK
New England (+3) @ Denver THE PICK - Patriots
Why? Cause I'm in Denver right now. And high. So I don't care if they've lost all their offensive weapons. No sir. These edibles are saying New England. All day. All night.  Go Pats.

I'm making my picks this week from what feels like every toilet on Denver. The altitude is wreaking havoc on my bowels. Yeah it's totally the altitude, I swear. Even from the bogs I can make better picks than those two piss-ants. If I lose this contest I'll never look at another line in my life.

Oakland Raiders @ Tennessee Titans +1.5 PICK: Raiders -1.5
I don't know but I like the Raiders in this spot. Derek Carr has had a great year, Mariota not so much.

Minnesota Vikings @ Atlanta Falcons -1 PICK: Falcons -1
Win a big game at home for me one time.

Miggsy's Monster Lock of the Week:
Buffalo Bills @ Kansas City Chiefs -6 PICK: Kansas City -6
KC has been red hot and it's all on Laskrandick West. I think that's how you spell it.

My adversaries are off getting Rocky Mountain High. They're morons to begin with, so I'm dying to see what the ganja does to them. Maybe they'll actually have insight once their minds are "expanded." (Probably not). Anyway, fuck them. On to the picks.

Tampa Bay @ Indy (-3) The Pick: TAMPA +3
Indy beat Atlanta (we'll get to them in a minute) last week but that's not exactly pulling off an upset. I still think Indy is bad and shouldn't be favored against any team outside their own shitty division. As for Tampa, they play feisty. And my grandmother smoked Winstons once upon a time. So there's that. Tampa wins outright.

Buffalo @ Kansas City (-6) The Pick: CHIEFS +6
Kansas City is playing a lot better lately. They lost a lot of tough games earlier because of their coach, who's still there, so it makes this pick risky. But on the other side, Rex and the Bills just lost their Super Bowl and both Taylor and Watkins are banged up. I think the wheels come off for good this week. Chiefs win by double digits.

BRANDONS BOOM PICK OF THE WEEK
Minny @ Atlanta (-1) The Pick: MINNY +1
The Falcons are complete frauds. Softest team in the NFL. Freeman is most likely out with a concussion, so now they're one-dimensional. And that dimension is simply throw to Julio. Minnesota knows this. Quietly, the Vikings are having a nice year and can take control of their division with a win. Look for AP to go crazy like his kid talked back in this game.
Posted by Justin Enuffa Ballard at 7:42 PM