Last week, I came down a bit. The week before, I was perfect, eating cavier and drinking champagne. A couple losses on Sunday, I'm horking down filet o' fish and guzzling syrup.


Nothing you can do about it except pretend everything's just peachy and go about your business. Like Miggsy and his hairline.

New York Giants (-2 1/2) @ Tampa Bay THE PICK - NEW YORK
I hate Eli, and the Giants. I feel I need to say that each time I pick them. He stinks, yet with the sorry state of QB talent in the NFL, is legit top ten in the league. He shows that he can be great (like last week's 6 TD performance and two specific games in February we won't talk about). But he makes so many stupid mistakes, like Cuddy buying a large shirt (No, it fits dude, your gut is almost contained). I have to, HAVE TO, believe they're better than Tampa. Of course, I'm probably wrong. But I hate Florida. The whole state. It's overrated, humid, pricey and filled with Coke dealers and cousin fuckers. Not to mention the buncha dickheads that flock there to spend half their salaries to see teenagers dressed up like a fucking mouse. Holy shit, look, a fake castle, I'm a princess and it only cost me A MILLION DOLLARS. Seriously, Florida, eat a dick.


DAN'S DOMINANT PICK OF THE WEEK
Tennessee @ New Orleans (-8)  THE PICK - NEW ORLEANS
Drew Brees has brought the Saints offense back from the dead.  Last week's record setting resurrection was almost as impressive as Brandon's horse picking losing streak at the Breeder's Cup. This game is just about a gimme, as the Titans essentially have no head coach nor starting quarterback at the moment (much like the Browns...or the Jets...or the Jags...or the...man, the NFL is awful).  You know what that means? 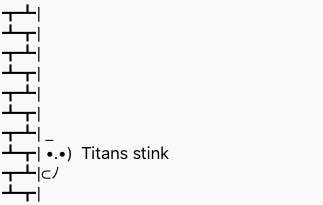 It’s been ugly the past couple weeks. Uglier than Miggsy’s golf swing. Uglier than Turk's sock game. I’m talking U-G-L-Y. I’m still in first place despite getting only 1 point again. Those other stiffs are so incompetent in picking games that it seems I could take a few weeks off and not lose any ground. They’re better off just picking ponies. At least they hit those from time to time (I hear they broke even…). Speaking of betting the ponies, for some reason I get 2 out of 3 on every trifecta. So that’s fun. “Hey why don’t you just do an exacta bet then?” – Hey why don’t you go fuck yourself? Moving on. This weekend I also lost in golf by 1 stroke to my nemesis, Keeef (That 14th hole will haunt me until next year). Then the same short-stack beat me in our baseball pool with the Mets choking away another game. And my girlfriend put Hocus Pocus on the TV. So I had a really solid weekend. Let’s get to the picks before I throw my laptop through a fucking wall.


Green Bay (-3) @ Carolina – The Pick = CAROLINA +3
The Packers were embarrassed Sunday night in Denver. And they haven’t been looking great their last few games. But again they are road favorites against a decent team with a good defense. So I’ll go against them again. Carolina has plenty of flaws, but they play everyone tough. I’ll take a good defensive team getting points at home almost every time. Cam Newton is gonna superman those hoes (I don’t know what that means).

Atlanta (-7) @ San Francisco – The Pick = THE TEAM GOING AGAINST BLAINE GABBERT -7
I can’t tell you how excited I am as a gambler to have the Blaine Gabbert show come back to town. I’m being completely honest and without any exaggeration here: When he played for the Jaguars, I thought he was the worst quarterback I’ve ever seen. I mean it. The worst. EVER. He literally looked afraid on the field. There are amputees I’d rather have as my QB. The only reason this isn’t the lock of the century is because Atlanta is a complete fraud. They’re 6-2 but the competition they’ve faced is a combined 23-36 this season. YIKES. And they’ve struggled in almost every game. But you have to lay the points against Gabbert. It’s a must. And if you’re a parlay or 3-team tease kind of gambler, this game has to be included. The idea that there is anyone out there who would even bet the 49ers in this game BOGGLES my mind. Even Danny wouldn’t do that, and he’s clueless.

BRANDON’S BOOM PICK OF THE WEEK:
Washington @ New England (-14) - The Pick = PATS -14
It's way too many points to be giving up as the lock of the week, and much like Miggsy in college, the Pats have quietly let a couple back-door covers happen. But fuck it, gotta roll the dice anyways. Might as well take the best team available. Betting against Kirk Cousins is a bonus. DeSean Jackson is playing this week, so I guess his prison term is over. He’s in a gang, right? I’m just assuming. Pierre Garcon is decent, but the French are assholes. Nobody on their defense scares me. I think Gronk already has 2 touchdowns. This might be the game the Pats finally hang 50+ points on someone. Blowout city.

I decided to go back and see how bad I had done over the last few weeks and lo and behold I find an error in how my score has been calculated. We’ve got some real shady accounting work going on by Dan Moore. The guy was outta work for a year, ya think he’d be able to find the time to sharpen up on his math skills. He probably learned math from the “common core” method (for the life of me I can’t understand that bullshit, its INSANITY).  I got the idea because B-Cuddy has been posting his score at the bottom of his picks each week (which was also wrong). He probably noticed the mistake in my score and thought he’d post his. Ya think that one-way prick woulda given me the heads-up. It’s probably that Santa Claus-lookin' hoodie he always wears. It's burning his retinas. What is he in the bloods or something? Is he auditioning to play Willie in the next Bad Santa? It’s hideous, much like his picks.


Jacksonville Jaguars @ New York Jets (-7.5) PICK: Jaguars +7.5
I’ll take the points in this one. The Jets wins came against the dregs of the NFL (Browns, Colts, Dolphins and Redskins). Those teams are a combined 11 and 19. That’s bad, like Danny’s career bad. I hope he got paid for the movie reviews because I heard there was a surplus in the cranberry yield, drove the price way down. Gunna be a long winter for him and his roommates, might need to burn furniture for warmth. I don’t see any way we are gunna get Badgerhead Stables up and running while carrying his dead weight. Believe me when I tell ya, there is a lot of weight. The Jags are just as bad. They are 2 and 5 but their two wins have come against NFC East teams (Bills and Dolphins). The Jets are an NFC East team. I see the Jags going 2-2 against the AFC East but they won’t lose this game by more than 7.5.


Green Bay Packers – 3 @ Carolina Panthers PICK: PACKERS -3
I just can’t see the Packers losing two games in a row. They put up an absolute dud and Aaron Rodgers was terrible. Denver's defense is the best in the league. Facing them on the road, knowing that they know you need to throw the ball is nervewracking for any QB not named Tom Brady. Both teams were undefeated too which adds undue pressure. I think all of that helps them bounce back this week on the road against another undefeated team who just happens to have the second best defense in the league. I watched the Carolina vs. Indy game last week and it was pathetic. It took OT for Carolina to finally put lowly Colts away. The Packers have the loss monkey off their back and will come into this game refocused. Losing to an AFC team means nothing in the long run but losing to Carolina could have playoff implications. It’s simply a must-win game for the Pack.


Miggsy’s Monster Lock of the week:  Washington Redskins @ New England Patriots – 14 PICK: Patriots -14
There really is no other pick here. The Pats will stomp Washington at home. The only question is by how much. 20? 30? Mexico? 45? Who knows? As for the Redskins, they argued in court this week that they should be able to keep their trademark name because there are several more offensive trademarks that aren’t being revoked. Those names include several dynamite trademarks such as Take Yo Panties Off and Dago Swagg clothing, Midget Man condoms and inflatable sex dolls and Baked By A Negro bakery products. I’m not going to lie to you, these are all fantasic brands. I don’t know why the Redskins feel they need to couple their offensive name with these upstanding products.