A Brief History of James Bond

**Editor's Note: Welcome to a special look at the history of James Bond, from our own Bond Consultant Dave Moore (Dan's brother).  Dave has what you might call an unhealthy fixation on everyone's favorite British spy.  So to commemorate the latest 007 opus Spectre, he's put together a little retrospective.  Enjoy!** 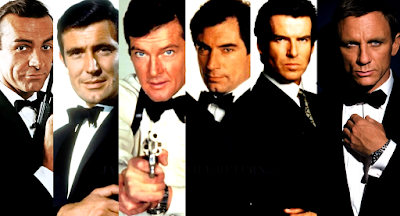 As many people know James Bond made his return to the screen this past weekend in SPECTRE, and I couldn't be more excited about a new Bond Film.  People who know me, know I'm a huge James Bond fan, both of the movies and the books.  The moment I first saw the inside of that gun barrel appear on the screen and a lone man walked into frame, fired his gun, and blood trickled down the screen, seven-year-old Dave was hooked.

Decades later, after 24 movies, who's the best Bond? Everyone has their personal favorite. Here is my breakdown:

For me it starts and stops with the original Bond, Sean Connery.  He's the first man to bring the character to life on film and he's still the best.  His presence on screen was electric. His physicality in the train fight with Robert Shaw's Red Grant in From Russia with Love made this a groundbreaking sequence.  He dripped sexuality and charisma. He was suave, charming and got any woman he looked at. He had the ability to deliver a perfectly-timed and witty one-liner. He was the coolest character in film at the time. Up until Daniel Craig, he was the closest to the James Bond from the books. Sadly Connery tired of the role and left after You Only Live Twice.  He came back a few years later for Diamonds are Forever but it wasn’t the same as the earlier films.


George Lazenby took over for Connery in On Your Majesty's Secret Service. He was in a tough spot having to follow such an iconic portrayal. Make no mistake, Lazenby had pretty big shoes to fill, but he actually wasn’t too bad. This was Lazenby's first film role and it shows. He lacked the debonair charisma that Connery had. While he looked good in a tux, he just didn’t seem right for the part. As he only did one movie it’s tough to compare him to the other actors.

Then Roger Moore stepped into the role and the tone of the movies changed. He didn’t try to be Connery at all. He brought a sense of humor to the films. He was just as suave as Connery but not as dark; more on the dry side than Connery or Lazenby. He was just as physical as the other two actors but the movies themselves got a little outlandish and silly. Growing up, Roger Moore was my favorite, so his movies have a special place for me.  Moore left his own stamp on the series and still has the most performances as Bond - 7 movies over 12 years. But eventually age started to take its toll and it was time for a new actor.

Timothy Dalton took over for Moore in 1987's The Living Daylights. Dalton is quite underrated in my opinion. His two films are much darker than any of the previous films, and his Bond is a more complex character. Dalton plays Bond as a man on the edge, and not on the same page as M-I6. It’s a big departure from the Roger Moore films and fits the time in which they came out. Dalton has the look and demeanor but there is something missing where it just doesn’t feel like he was ever comfortable in the role.

Dalton's second film, License to Kill failed to deliver at the box office, and so Pierce Brosnan took over/reinvigorated the franchise in 1995 with GoldenEye, which was by far the apex of the four films he starred in.  He brought swagger; that trademark urbane sophistication we associate with Bond.  He was as physical as Connery in his day, had the wit of Moore, looked great in a tux and knew how to order a drink. He could also be cold and vengeful when he needed to be. The downfall with Brosnan was that (like Moore's films) the next three movies just got silly. I mean an invisible car?  Come on, that's a stretch even for this franchise. But they couldn’t ask for a better actor to take Bond into the mid 90s thru the early 2000s.

The series got a bit of a reboot in 2006 and took a much more serious turn with the second best Bond, Daniel Craig. This time they really got it right. I know he doesn’t have black hair and he has blue eyes, but man he's the closest since Connery to match the Bond from the books. Physical, dark, a haunted past, plays Bond with a totally fresh approach. Craig nails it from the beginning of Casino Royale all the way to Skyfall. He makes Bond feel like a real person. There weren't a lot of gadgets in these movies, which was a nice change of pace. Craig plays him cold, brutal, and at times very vulnerable. Just a perfect portrayal.

James Bond always has to change with the times. If Spectre is to be Daniel Craig’s final Bond it will be tough to fill his shoes. But I’m sure who ever wears the next tux and brandishes that Walther PPK will be up to the challenge.
Posted by Justin Enuffa Ballard at 12:38 PM