Welcome to another installment of Brewery Reviewery, here at Enuffa.com, where I visit a local purveyor of craft beer, sample some flavors, and report back.  This past weekend I hit up Cape Cod Beer in Hyannis, MA, where no fewer than 15 beers were up for the tasting, plus a whole lot of other local goings-on.

The tasting room is located in part of their warehouse building, behind the retail store (which offers take-home growlers, cans and official Cape Cod Beer merch).  In addition to beer pours there was a slew of local vendors peddling their wares, from specialty salts to hot sauces to crafts.  The brewery also features a pop-up kitchen with rich & tasty comfort food. 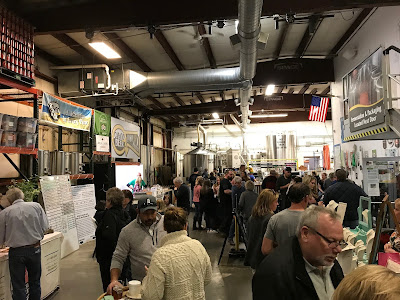 In terms of beer options, Cape Cod lets you either order full-pint pours or go with a flight of five beers.  I started with the latter before settling on a favorite.  Here's the rundown:


Narrow Lands NEIPA: Soft malt character and little-to-no yeast character, juicy, double dry-hopped New England IPA is easy-drinking with a crisp, clean base that allows the hops to shine through.  Double dry-hopped with Citra and Mosaic, this easy-drinking beer has the bright fruit notes of grapefruit, guava, mango and orange rind.  The hops give this beer another level of thirst-quenching bite that is still soft and mellow.  Clean mouthfeel, juicy hops and a crisp-dry finish.  ABV: 5.9%

JB: This New England-style IPA was a little less citrusy than I could've wished, but it was balanced and pleasant, and easy to drink.  I've recently become obsessed with NEIPAs so I go out of my way to try new ones whenever I can.  This one was alright.

Big Sea Saison: Big Sea Saison is a single-hopped farmhouse ale that features Sorachi Ace, a hop that was originally developed in Japan.  This hop is cultivated from the famed Brewer's Gold and Saaz hops and is known for its lemony flavor.  The beer has a bright citrus overtone matched with an effervescent, dry finish.  ABV: 5.25%

JB: I'm a big fan of saisons and this was one of the standouts of the day, with a good mix of citrus flavor and a bit of spice.  I ended up buying a couple four-packs of this, both because I really enjoyed it and because as a seasonal offering it was 50% off.  Lovely stuff, this one.


R&R Tropical Stout: Similar to the stouts found in tropical climes, this very dark beer with a sweet rum-like quality was brewed with lager yeast fermented at ale temperatures and has smooth roasty flavors without a burnt harshness.  Dave Pappas is partnering with breweries across the country to support the Black Ale Project, a craft beer initiative to raise money and awareness on behalf of US war veterans.  This beer is our 2019 Black Ale Project beer, and it benefits the Nicholas G. Xiarhos Memorial Fund.  ABV: 6.6%

JB: I love stouts, and this one is super smooth, with some rum sweetness and a rich caramel feel.  The idea of stouts in tropical climates seems counterintuitive, but this would go quite nicely with a relaxing day on the beach.

Shucker's Reward Oyster Stout: Based on an Irish Extra Stout, this full-bodied black beer has a delicious roasted malt character with flavors and aromas of coffee and chocolate.  Over 20 pounds of whole oysters sourced from 14 different Cape Cod towns (and a quahog shell from Harwich) were added to the kettle during the boiling of this brew, adding minerals from the shells as well as mild flavors and aromas to this historical and memorable beer.  ABV: 5.3%

JB: On paper this sounds bizarre - beer brewed with oysters?  But this had a nice dry flavor and the very subtle hint of seafood actually complemented it well.  It drinks more like a black lager, with understated notes and a crisp feel.

Shillelagh Irish Pale Ale: A "crushable" pale ale with an Irish twist.  This beer was brewed to help celebrate dna promote dthe annual local Cape Cod St. Patrick's Parad and all things Irish on Cape Cod.  The beer was designed to be easy drinking and not to high in alcohol, so that you could enjoy more than one.  Made with Irish Ale Malt, and clover honey, this beer is Irish through and through.  ABV: 4.8%

JB: Since it was St. Paddy's Day weekend I had to try the Shillelagh, a very agreeable Irish pale ale with a balanced malt flavor and crisp finish.  My father-in-law fell in love with this one and made it his session beer for the day.

Cape Cod Dunkel Weizen: Similar to a Hefeweizen, these southern Germany wheat beers are brewed as darker versions (Dunkel means "dark") with deliciously complex malts and a low balancing bitterness.  The color is a cloudy (unfiltered) medium brown with the usual clove and fruity (banana) character, which comes directly from the yeast.  ABV: 5.4%

JB: This was the top of the heap for me.  I've been a Hefe enthusiast for years and Dunkels bring the same spicy goodness with a slightly richer tone.  This right here is a delicious goddamn beer.  Sadly Cape Cod only brews this one for Oktoberfest, so they ran out before I could follow this taster with a full Dunkel pour.  I'll be picking up some of this in the fall.


Additionally I had a couple other Cape Cod selections at the hotel bar:


Cape Cod Beach Blonde Ale: A polished golden ale with a hint of toasted malt character and a clean finish.  This refreshing, light-bodied American Blonde Ale is smooth and easy drinking.  Perfect for the beach, the backyard or just relaxing after a long day.  ABV: 4.9%

JB: Probably the most easy-drinking of their rotation, the Blonde is basic, simple and classic.  Balanced, slightly sweet, and light enough to leave plenty of room for another one.

Cape Cod Red: Nothing but smooth sailing with this North American Style Amber Ale.  A well-balanced deep amber brew with a mouthful of malt flavor and just the right amount of hop character . The flagship of Cape Cod Beer, this beer won't steer you wrong!  ABV: 5.5%

JB: I finished the evening with the brewery's flagship, a malt-forward red ale reminiscent of Sam Adams Boston Ale but with a sweeter overall flavor.  This one is rich but not too heavy and has an eye-catching deep red color. 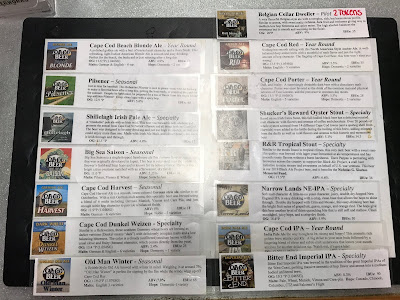 Cape Cod Beer offers a very wide selection of flavors in a fun, casual atmosphere, and on a Saturday there's plenty of other stuff going on there to keep you engaged while you sample.  Whether you live on the Cape or are planning a visit, be sure and stop in for some delicious brews! 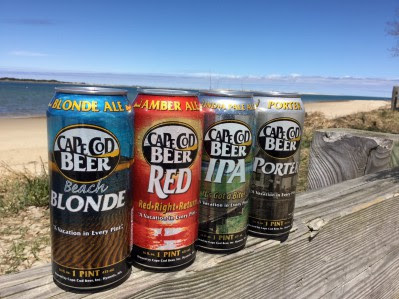