Another wrestling legend has left us, as King Kong Bundy passed away yesterday at the age of 61.  I first became aware of the 450-pound monster heel in 1986 or so; I'd started watching the Hulk Hogan cartoon on Saturday mornings but hadn't crossed over to the actual wrestling product yet.  But flipping through the TV Guide one day I saw an ad for Saturday Night's Main Event, which promoted a King Kong Bundy match.  No picture of the guy though.  Being a fan of the film King Kong, the name immediately caught my attention and I began to try to picture what a wrestler named after The Eighth Wonder of the World (a moniker applied to Kong way before Andre) would look like.  A few months later I caught my first glimpse of the bald behemoth and instantly found him terrifying.  Just a giant wall of humanity with a shaved head and missing eyebrows, whose two big moves both involved squashing an opponent under his massive girth.  I soon learned that Bundy had challenged Hulk Hogan (my favorite at the time) for the WWF Title in a steel cage at the second WrestleMania and went out of my way to find that match.  As an eleven-year-old I loved it - an easily digestible ten-minute titanic struggle inside a blue bar cage.  Bundy was certainly no in-ring workhorse, but his fearsome appearance and stature made him a credible monster, plus he could cut a fine promo.  His "five-count" gimmick was a clever way to get over his physical dominance as well; in all his squash matches he'd hit his Avalanche finisher (think the Stinger Splash but with twice as much weight behind it), and insist the referee count to five instead of three for the pinfall.  His run at the top of the WWF was relatively brief, but King Kong Bundy was always one of my favorite superheavyweight heels of the 80s, who could always be booked as a major threat to our babyface champions.


In other news, the nonsensical RAW booking continues.  Last night's episode was fraught with rushed, messy booking, as not only have The Shield reunited despite Dean Ambrose's loathsome actions/words beginning the night Reigns stepped away to deal with his leukemia, but the Ronda-Charlotte-Becky story went through about three weeks of storyline development in one segment.  The upshot is, Becky has a way into the 'Mania match and Ronda is a heel now.  So in the last six weeks we went from Becky winning the Rumble and challenging Ronda, to Stephanie suspending Becky, to Stephanie reinstating Becky, to Vince suspending Becky and putting Charlotte in her 'Mania spot, to Ronda demanding Becky be reinstated or she'd walk, to Stephanie declaring the title vacant and booking Charlotte vs. Becky to determine a new champion, to Ronda coming back and saying she didn't vacate the belt, to Stephanie declaring Charlotte vs. Becky to determine if Becky will be added to the title match at 'Mania.  Sweet fucking Christ this has to be the sloppiest, most convoluted way of turning a singles match into a triple threat that I've ever seen.  And I'm old enough to remember when Chris Benoit won the Rumble, challenged Triple H, and went to sign the contract for the match, only for Shawn Michaels to superkick him and sign it instead, which was somehow legally binding.  The obvious desperation that's coming across in WWE's short-attention-span booking reminds me of late-era WCW.  Nothing makes any sense from show to show, people jump from babyface to heel and back in a matter of weeks, sometimes without any catalyst (Elias and Ambrose for example), and last night there were at least two instances of people breaking character to let you know "this is personal now." 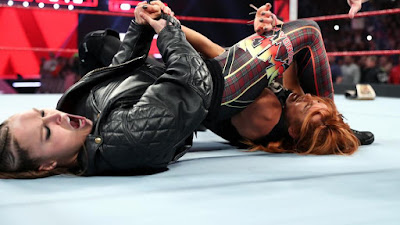 I dunno about you guys, but I can't stand when wrestling companies take the "worked shoot" deal to the extreme of "This isn't my character saying this, this is ME."  Hey asshole, within the context of a wrestling show, you and your character are one and the same, just like Andrew Lincoln IS Rick Grimes within the fictional universe of The Walking Dead.  Imagine if Rick Grimes was so pissed at his former best friend Shane and said "This isn't Rick Grimes saying this, I'm actually gonna kill you for real, Jon Bernthal!"  Stop with this "going off-script" nonsense.  It renders everything else about the show pointless.  If Triple H is so upset with Dave Batista that he's "breaking character," what does that say about how inconsequential everything else on the show is, that involves the dozens of characters still sticking to the script?  Why should we care about anything besides the "real-life" Hunter-Batista feud?  Maybe that's what Paul is going for.  Maybe it's the old Triple H trying to put all the focus on him again.  I've said it for years.  Hunter is an excellent booker with a great mind for the business, but all that goes out the window when he's an onscreen character.

Sunday's FastLane show has some promising matchups but they've been booked amid rampant scrambling to get things set up for WrestleMania.  It's all a confusing mess, and don't even get me started on shoehorning Colin Jost and Michael Che into this (For the record I'm a fan of both guys on SNL, but I don't wanna see them do bad comedy on WWE television).  Celebrity involvement in wrestling is almost always bad.


Posted by Justin Enuffa Ballard at 11:44 AM