WWE Smackdown: Why Asuka Should Go To AEW

Remember when WWE would announce a big match for WrestleMania and your anticipation would build as the big day got closer?  Good times, right?  Whatever happened to that idea? 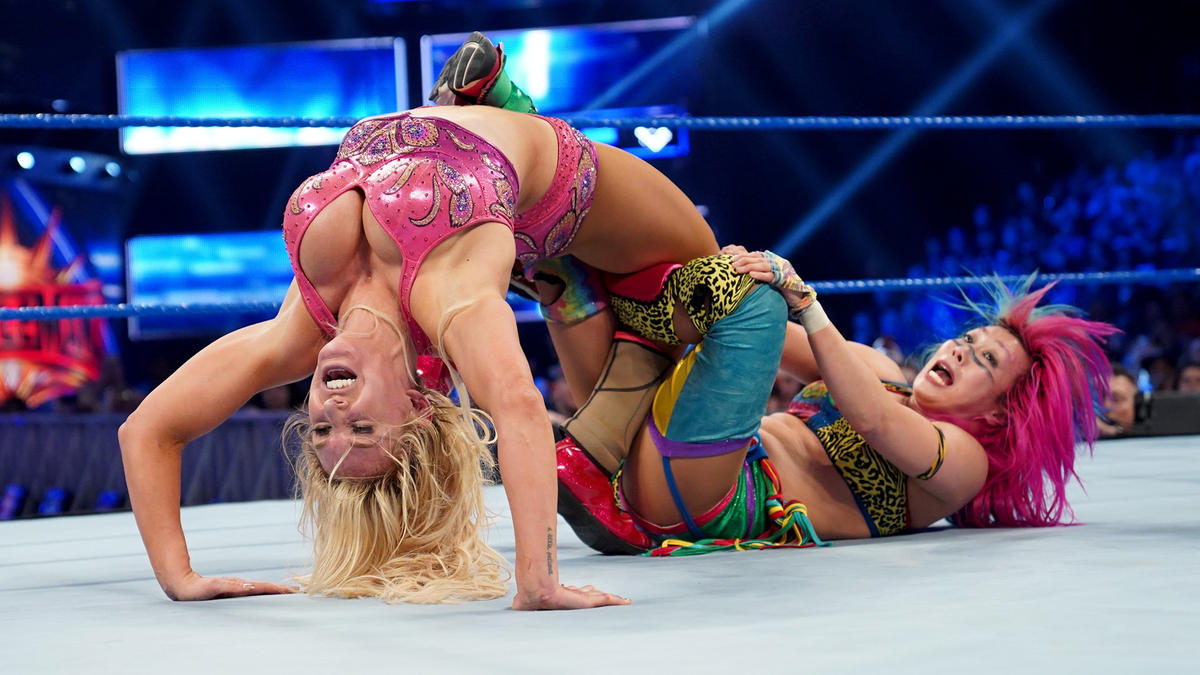 I resisted the urge to begin this article with the phrase "fuck this company," so as to not sound as genuinely angry as I am.  Last night, in an effort to further load up a WrestleMania main event that didn't need further loading, Vince decided to throw out the planned Fatal 4-Way to determine a #1 Contender to Asuka's Smackdown Women's Title and just had Asuka defend against Charlotte, with no buildup whatsoever.  Oh, and she lost.  So now Ronda-Becky-Charlotte involves both Women's champions for no reason, and Asuka has nothing to do at WrestleMania.  Isn't that just fuckin' peachy.

Look, I realize Asuka's planned title defense at 'Mania wasn't going to be a featured match.  Hell, it probably would've been bumped to the pre-show, on a PPV with 17 matches.  That's fine.  It still would've been an easy, dominant title defense that would've made her look strong and she could've moved on to a better opponent later.  Now she's just one of the girls who wasn't important enough to have a real match and she'll presumably be stuck in the ever-pointless pre-show battle royal, that will be won by a comedy act anyway.  Fuck this company.  See?  There it is.


So now Asuka's lost twice to Charlotte in identical tapout fashion, while the four women previously vying for a title shot were just swept under the rug, all on the whims of a 73-year-old man with obvious dementia.  Nothing like killing an entire division dead just to further stack one match that didn't need any more stacking.  God for-fucking-bid we have a WrestleMania build without something ruining it.

There was no reason to do this.  Ronda vs. Becky vs. Charlotte is already a hugely historic match featuring the hottest star in the company and one of the biggest mainstream names in all of sports.  Why does Charlotte ALSO need a belt going in?  Oh, because she's the tweener now?  Well tough shit, Vince; you shouldn't have had the entire build up to this be a convoluted mess.  Of course everyone's cooled on this show since January, the plan changes every goddamn week.  Becky wins the Rumble, then she challenges Ronda.  Then she gets suspended because of her knee.  Then she gets unsuspended.  Then she gets suspended again and Charlotte takes her place.  Then Ronda threatens to give up her belt unless Becky's let back in.  Then Becky gets a match with Charlotte to earn her spot back.  Then Ronda turns heel, making Charlotte the tweener.  The fact that anyone is still interested in this match at all is a miracle at this point.  This is the opposite of how building to a PPV is supposed to work.  Watching the weekly shows is supposed to make us MORE interested in the big match, not LESS.

So what's the endgame here?  Unifying the two Women's Titles?  Yeah, I'm fine with that, but wait till sometime after 'Mania so we can have a big Champion vs. Champion match.  How 'bout Becky vs. Asuka to determine the Undisputed Champion?  Becky then gets her win back from the Rumble where Asuka tapped her out.  What's so fucking wrong with that?  Or is the plan to have WWE's Four Horsewomen all standing tall with belts at the end of the show so they can book them against Ronda's Horsewomen?  Cool, but why does Charlotte need a belt for this?  The simple fact is that this move was unnecessary and ultimately counterproductive, making their biggest women's star not in the WrestleMania main event look like an also-ran.  How does this company constantly manage to get everyone less over the longer they're on the main roster?

I've seen people use the logic "There were too many matches anyway."  Granted, but how about skipping one or both Battle Royals?  Or the SNL guests?  Or the WrestleMania host nonsense?  Or the Elias musical performance?  Is anyone watching the show specifically for any of these reasons?  No.  They aren't.

Congratulations Vince, you actually soured me on a WrestleMania main event I was really excited about.  You are literally the enemy of fun.  For the love of fucking Christ, step down before you alienate what's left of your shrinking fanbase.  AEW's launch can't come soon enough....


Posted by Justin Enuffa Ballard at 10:33 AM