Sorry trolls, Captain Marvel is not only a hugely successful female-led blockbuster, but it's a pretty darn good one at that. 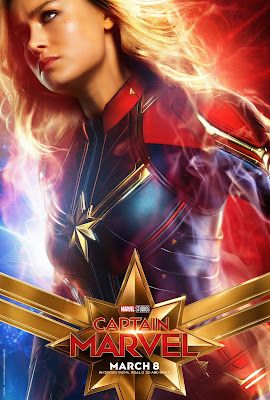 Marvel's latest entry in the decade-plus MCU centers around Carol Danvers (Brie Larson), an Air Force pilot whose DNA gets supercharged during a mission gone wrong, transforming her into a galactic ubermensche.  As part of the Kree Starforce, Vers as she is now called helps police the universe under the tutelage of Yon-Rogg (an austere Jude Law), waging war against a race of shapeshifters known as the Skrulls.  Only problem is Vers begins having flashbacks to her previous life and feels a compulsion to learn what she's seemingly forgotten.

Captain Marvel refreshingly turns the idea of the origin story on its ear by presenting Vers' past as a mystery to be uncovered; she and the audience glean information about her past together, making the presentation much more engaging than your average superhero origin.  Amid some James Bond-esque action set pieces with a sci-fi tinge, information about our lead character is doled out gradually, while she simultaneously builds a rapport with her new ally Nick Fury (Samuel L. Jackson in a spry variation of the grizzled character).  Vers finds herself on Earth in the mid-1990s, hoping to locate a prototype light-speed travel device before the Skrulls find it, and the film provides lots of 90s-themed easter eggs, like grunge references and a scene in an internet cafe (remember dial-up?).

The film has plenty of light humor but also some poignant thematic moments centered around persistence even in the face of everyone telling you you're not strong enough to succeed.  The plot also takes some unexpected turns, which I won't reveal here, but suffice it to say I appreciated the sociopolitical relevance even if some of it is a bit on the nose.  Larson and Jackson have an easy chemistry together and this film adds layers to the Fury character while providing a strong backstory for Vers, thus we'll be emotionally invested in her Avengers: Endgame appearance.  The filmmakers have also left plenty of room for more Captain Marvel standalone films, giving her multiple objectives to achieve in the timeline between the 90s and today.

Much (unnecessary) controversy has ensued around Brie Larson, Rotten Tomatoes and man-boy boycotts (Manboycotts?), but it all falls by the wayside when you sit down and actually watch the film; an engaging origin story that takes a different approach and keeps things small-scale and personal.  Larson makes a very likable, fittingly sarcastic Carol Danvers, Jackson finds new territory to explore in Nick Fury, Ben Mendelsohn is excellent and unrecognizable as Talos the Skrull, and watch out for Goose the cat....

Captain Marvel is a fine lead-in to Avengers: Endgame that introduces a readily sympathetic new character to build the next phase of the MCU around.