What's up folks?  Time for a new weekly Enuffa.com feature called The Great PPVs, where I revisit a wrestling show that captured the imagination and carved out a place for itself in the annals of the business. 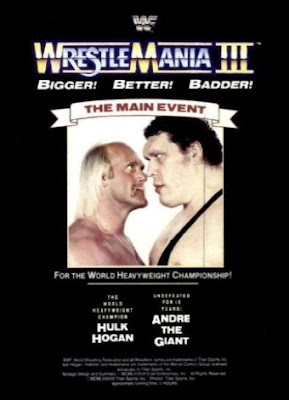 This being the first installment I thought I'd start at the beginning.  Or more precisely, at the beginning of my time as a wrestling fan.  I started watching this pretend sport in November of 1986 (after having been sucked into the characters and pageantry via the Hulk Hogan's Rock n' Wrestling cartoon).  The first three major angles I was privy to as a fan were Randy Savage trying to crush Ricky Steamboat's neck with the ring bell (for which I absolutely HATED Savage at the time), referee Danny Davis screwing the British Bulldogs out of the Tag Team Titles (for which I absolutely LOATHED Davis), and Andre the Giant turning against his best friend Hulk Hogan, challenging him to a WWF Title match (for which I absolutely REVILED Andre).

Around the same time the WWF had been showing ads for something called WrestleMania III.  I was like, "What's that, some sort of convention?  And when were WrestleMania 1 and 2??"  Then when Andre challenged Hogan to a match at WrestleMania it all fell into place.  "Oooooh, WrestleMania III is like a special wrestling show."  I didn't yet grasp the concept of PPV, so this was all new to me.

Those three aforementioned angles, along with the retirement of Roddy Piper, would form the backbone of the WrestleMania card, a lineup so magnanimous it could only be held in the massive, 90,000-seat Pontiac Silverdome.  To help build the main event, the main draw for this monumental PPV, the WWF touted Andre's seeming imperviousness; he had not, according to the WWF, ever been defeated in a wrestling ring (in fact he had lost a couple matches outside the WWF), nor even body slammed (even a cursory knowledge of wrestling history of course disproved that factoid - Hogan himself had slammed Andre only seven years earlier).  They also booked a special battle royal on Saturday Night's Main Event a few weeks before 'Mania, where Andre eliminated Hogan before being tossed out by numerous other wrestlers.  The WWF Magazine published a Tale of the Tape, claiming Andre was 7'5", 520 pounds to Hogan's 6'8", 294 pounds (down from his usual billed weight of 303 - nice touch).  All signs pointed to the four-year WWF Champion's time being up.  There was no way he could beat the unbeatable. 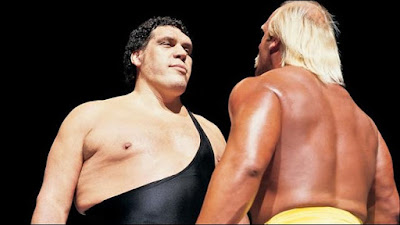 The event itself remains one of the most eminently rewatchable wrestling shows I've ever seen.  For the nostalgia factor alone I'm compelled to watch at least part of this show every year around 'Mania time.  It just looked and felt different from every show before or since.  The translucent roof of the Silverdome provided a gradual transition from day to night as the show wore on, making for a unique atmosphere.  The twelve matches, each clocking in under 15 minutes fly by, with only the Savage-Steamboat showdown and the main event delivering the feel of epic encounters.  But it didn't matter at the time; this show captured lightning in a bottle, and it's one of those PPVs I wish I could go back and see again for the first time (Sadly I didn't watch it live and only got to see it a few months later as a VHS rental).

The first five bouts formed a crowd-pleasing undercard.  The Can-Am Connection vs. Don Muraco & Bob Orton was a quick, fast-paced opener with a clean babyface win.  Hercules vs. Billy Jack Haynes was an enjoyable brawl of a grudge match that ultimately settled nothing when both men were counted out.  King Kong Bundy, Lord Littlebrook and Little Tokyo vs. Hillbilly Jim, Little Beaver and The Haiti Kid served as the first throwaway match of the night.  King Harley Race vs. The Junkyard Dog, while very brief, contained a good amount of action.  The Rougeau Brothers vs. The Dream Team, while even more brief, led to Brutus Beefcake's babyface turn, which led to his involvement in the first big match of the night.

The Roddy Piper-Adrian Adonis Hair vs. Hair encounter was noteworthy as Piper's supposed final wrestling match, before his attempted jump to Hollywood.  His "retirement" would only last about two and a half years, but the crowd on this night was both elated and bittersweet at seeing Roddy's last hurrah for the time being.  The brawling here was messy but the match is mostly remembered for its aftermath, when Piper put Adonis down with a sleeper hold and enlisted Beefcake's help in shaving Adonis's bleached tresses (Beefcake had been the accidental victim of Adonis's own scissors just weeks earlier on Superstars of Wrestling).  The Silverdome delighted in seeing Adonis get his embarrassing desserts before bidding Piper a fond farewell.

Next up was the six-man tag involving the new Tag Team Champs, the Hart Foundation teaming with the man who'd more or less handed them the straps, ex-referee Danny Davis (WWF President Jack Tunney suspended Davis for life following the incident so he became a wrestler instead) against the three victims of Davis's questionable officiating, former Tag Champs The British Bulldogs and former I-C Champ Tito Santana.  This hotly contested, action-packed six-man didn't get a ton of time but it delivered plenty of solid work from the two teams and Santana.  Davis hardly got in the ring at all, but after Bret nailed Davey with Jimmy Hart's megaphone, Davis actually got to make the match-winning cover, much to the crowd's (and mine at age 11) chagrin.

Another throwaway match followed, as Butch Reed made short work of Koko B. Ware.  The less said about this the better.

But the 9th match of the evening not only stole the show but redefined what a professional wrestling match could be in 1987.  Randy Savage and Ricky Steamboat capped off their two-year rivalry (that had escalated into a blood feud) with a ferocious, balletic in-ring masterpiece.  The action was impossibly quick, with reversals and near-falls galore, but conveyed the urgency and anger surrounding the feud.  The fighting spilled outside the ring numerous times and Steamboat's second, George "The Animal" Steele (another rival of Savage's) at one point had to help him back into the ring after Steamboat had gone sliding over a table and into the audience.  As the bout neared its climax, Savage, having inadvertently knocked out referee Dave Hebner, bombed Steamboat with a flying elbow off the top rope but got no count from the unconscious official.  Savage instead went for the ring bell, hoping to reinjure Steamboat's throat, but the attempt was thwarted by Steele.  As Hebner came to his senses, Savage attempted a body slam that Steamboat countered into a small package for the sudden win and the Intercontinental Title.  The Silverdome became unglued for the first of two occasions that night, as "The Dragon" had finally avenged his earlier injury and been one half of one of the greatest matches anyone had ever seen at that time. 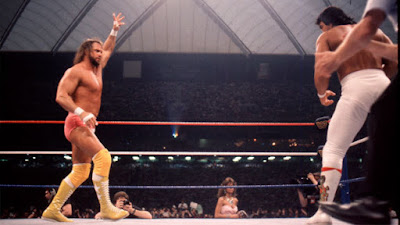 The next two bouts, Jake Roberts vs. The Honky Tonk Man (which stemmed from a Snake Pit episode when HTM blasted Jake in the head with a guitar) and The Killer Bees vs. The Iron Sheik & Nikolai Volkoff, were both passable but largely forgettable bouts designed to bring the crowd down a bit between the two big matchups (a card-building philosophy WWE still inexplicably employs to this day; personally I prefer it when the card builds all the way through to a main event peak).

Then it was time for the big one.  The match everyone was there to see.  The biggest wrestling match of all time (possibly even to this day).  Hogan vs. Andre is one of those matches that defies a star rating.  The in-ring action was terrible.  The moves looked awkward and unrealistic.  Andre desperately required back surgery and could barely move around.  And yet this match works completely on its own terms, as a true main event spectacle.  If a ten-year-old boy were to script a wrestling match between these two, this is more or less what it would look like.  Simplistic, relatable, and easily digestible.  And that's why it worked so well for its time and place.  As a child I couldn't imagine anything more colossal than the WWF's resident Superman duking it out with its answer to The Thing.  Hogan-Andre was twelve minutes of signature WWF brawling, with Hogan selling his ass off to make Andre's barely credible offense look absolutely devastating.  By the time of his usual late-match comeback, Hogan had the tens of thousands in attendance hanging on his every move.  And his next move was the one that sent shockwaves through the industry: Hogan picked up the 500-plus-pounder and slammed him to the mat, sending the Silverdome crowd into a nuclear meltdown.  One legdrop and three seconds later, Hogan had done the unthinkable, handing the giant his first-ever in-ring loss in the WWF and cementing himself as the new face of the company.

WrestleMania III was met with unanimous praise at the time and became a touchstone event; for literally years all WWF PPVs, particularly every subsequent WrestleMania, would be judged against this show, and for good reason.  It delivered numerous memorable moments and both of its marquee matchups delivered on exactly the level we were hoping for.  It also set the tone for the rest of the decade, becoming the template for WrestleManias through the end of the Hogan Era.  It was the first PPV event I was around for as a fan, thus it will always have sentimental value for me.  On top of that it's just a damn fun show to watch.