Fastlane 2019 started life as a Vince Russo-esque calamity of a PPV and ended up being an okay show by the end.  Despite numerous nonsensical booking decisions that have accelerated in recent months amid WWE's ratings desperation, there was enough good wrestling here to save the show and give it a passing grade.  The first third of the PPV was bad, the second third was okay, and the final third achieved "good." 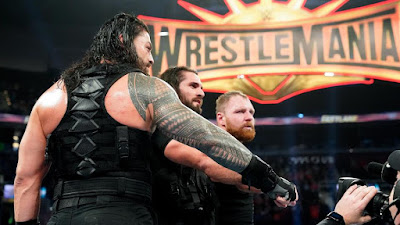 The show opened with the Usos-MizMahon rematch, which was probably a step up from their previous efforts.  Still, Shane really needs to quit it; he was once again out of breath and purple after not much activity.  The big spot came late in the bout, when Shane was about to go for a coast-to-coast dropkick on Jey but Jimmy climbed the opposite turnbuckle, intending to hit a big splash on the Miz.  Both men jumped simultaneously and Shane ended up dropkicking Jimmy midair, but unfortunately the timing was a bit off and Shane hit Jimmy's knees.  Still the spot got a good reaction.  Miz then went for a frog splash on Jey, who got his knees up and cradled Miz for the win.  Post-match, Shane turned on Miz and beat the piss out of him in front of his father, who turned in one of the worst performances I've ever seen on a wrestling show.  Surely if a father were watching someone beat up his son in real life he'd react, right?  Show some hint of being upset?  Maybe jump the rail and try to help?  Nope.  Miz's dad just sat there like a deer in headlights and didn't go over to help his son until after Shane had left.  This angle was pretty terrible.  Is anyone legitimately interested in Shane vs. Miz, by the way?  Anyway the match gets ***. 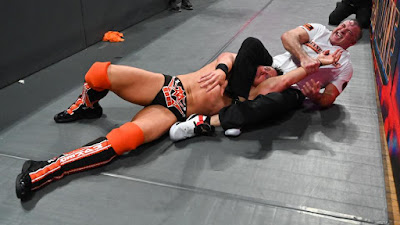 After an interminably long lull involving Elias and various commercials, the show finally got going again with Asuka vs. Mandy Rose, a more or less nothing match that went six minutes and ended with Sonya Deville grabbing a kendo stick from under the ring but leaving the apron all bunched up under the ropes.  Mandy bounced off the ropes and slipped on the apron, stumbling right into an Asuka kick for the pin.  Why Asuka should even need a banana peel spot to beat Mandy is beyond me.  Mandy and Sonya then teased a breakup as they walked to the back.  Can we for Chrissake give Asuka a real WrestleMania opponent?  Maybe call up Kairi Sane?  This match wasn't good.  *1/2

Okay, here's the Vince Russo part of the show.  Kofi Kingston had been called to Vince's office on the pre-show to discuss the WWE Title situation.  Big E and Xavier went back to check on him, and Kofi was still waiting outside Vince's office.  They barged in and Vince said "Where have you been, I've been waiting an hour!"  Not sure what the point of this misunderstanding was, other than maybe as an inside joke.  New Day begged Vince to add Kofi to the WWE Title match, and finally Vince said "Okay, tonight's WWE Title match is a triple threat!  Your match is happening next, so get out there."  Kofi went to the ring and was then informed that his match was a handicap match against The Bar, who then proceed to beat a raincheck into Kofi for five minutes or so.  Can someone explain what the point is of having your most over male babyface get duped into a handicap match where he gets in almost no offense and loses?  How is this helping Kofi as an upcoming star?  This was a waste of a segment and artificially inflated the show's running time.  Was someone's plane late and they needed to kill time till they arrived?  How 'bout Vince says "Tonight's WWE Title match is now a triple threat....but you're not in it.  Go home."  It accomplishes the same thing without burying your hot star.  Chrissake.  DUD

The show finally got on track with the RAW Tag Title match, which fell short of expectations but was still fun.  The Revival, Gable & Roode and Ricochet & Black worked a fast-paced match with some nice innovative spots.  Eventually The Revival won with Shatter Machine, but then both babyface teams jumped The Revival after the bell.  Not sure what the point of that was.  Black and Ricochet both hit their finishers on Dash Wilder.  This was fine.  ***1/2

A late addition 4-way match for the US Title helped this show, as Samoa Joe, Rey Mysterio, Andrade and R-Truth had another action-packed fun match.  This had tons of false finishes and high spots, and built to Rey hitting Joe with 619 but missing his top rope splash.  Joe then locked in the Coquina Clutch for the win.  Everyone looked great here and this was easily the best match up to this point.  Not sure what the WrestleMania plan is for Joe, but the booking has been seemingly building to Joe vs. Cena.  If that's the plan I'm on board.  ***3/4 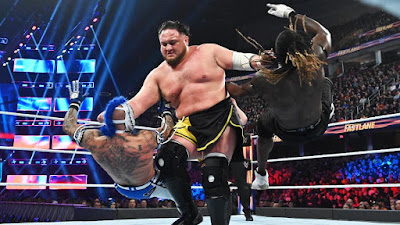 The sloppiest match of the night was next, as Sasha and Bayley defended their new belts against Nia Jax and Tamina.  The match wasn't terrible but there were numerous miscues and near-accidents.  The babyfaces worked hard to make this good but it didn't quite work.  At the seven-minute mark Jax went for a powerbomb on Bayley, but Bayley hit a hurricanrana and got the pin.  Afterwards the heels beat up the champs, Beth Phoenix tried to help them and she also got clobbered.  Then Natalya rushed to Beth's aid and took a beating as well.  So obviously Nia/Tamina vs. Beth/Nattie is in the cards, but where does that leave Sasha and Bayley, who were all forgotten about by the end of this?  **

The Match of the Night honors go to the WWE Title match, as Daniel Bryan and Kevin Owens did indeed have an additional opponent, the returning Mustafa Ali.  Ali was put in the unenviable position of being Kofi's bait-and-switch, and the crowd let everyone know they weren't happy about it.  But all three guys worked their asses off to win the fans over, and by the end they'd succeeded with flying colors.  This match was full of great spots and near-falls; Ali at one point hit a 450 on the ring apron, a Spanish Fly, a Tornado DDT from the top rope to the floor, Owens reversed big moves on both guys into pop-up powerbombs, and finally Bryan countered an Ali Tornado DDT with the running knee for the pin after 19 minutes.  Really fun stuff, and high on the list of best main roster matches of 2019 thus far.  ****1/4 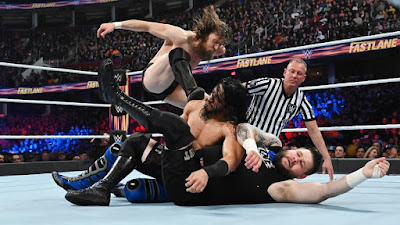 The confusing-as-fuck Becky-Charlotte-Ronda saga continued next as a limping, crutch-assisted Becky proceeded to try and fight Charlotte despite WWE not clearing her a month ago for the same condition.  Becky and Charlotte kept it entertaining for a while, as Becky took tons of punishment but kept coming back.  After about seven minutes the thought occurred to me, "Wait a second, Ronda really wants Becky in the 'Mania match, so she'll probably come down and attack her to draw the DQ."  And that's exactly what happened.  Charlotte had locked in the Figure Four and Ronda came a-runnin', punching Becky and getting Charlotte DQ'd.  Becky smiled, having advanced to the WrestleMania match.  This was kinda dumb and I don't understand why Becky couldn't have just recovered from the original knee injury weeks ago and won a competitive match here.  Wouldn't that build her up better going into 'Mania?  The booking of what should've been a slam-dunk feud has been off-the-charts terrible.  *3/4

The main event slot went to the Last Time Ever Shield match, which was fun and very similar to the group's glory days.  Roman was pretty well-received, the match escalated into the signature chaotic Shield formula, and the result sent everyone home happy.  I was still hoping Ambrose would turn on his buddies to set up Roman vs. Dean at 'Mania, but this was really just about seeing the Shield in action one final time.  Bobby Lashley took a Curb Stomp onto one of the tables, Drew took a triple powerbomb through another, and finally the Shield put Baron Corbin away with a powerbomb in the ring.  The crowd ate it all up, and this ended up being a fine main event.  No idea what they have Roman doing at 'Mania, but I guess Roman-Drew is a possibility.  I'd be lying if I said I'm excited about that prospect; I feel like Drew needs some serious rebuilding after months of 50-50 nonsense.  Anyway, this was quite solid.  **** 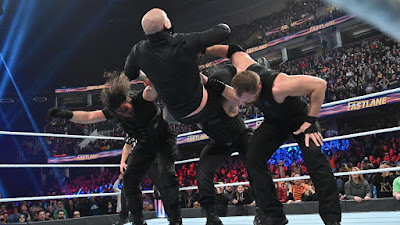 Fastlane was quite an uneven show but there was enough good stuff to make it worth a partial watch at least.  The WWE Title match, the US Title match and the main event are well worth seeing.  The rest is pretty skippable.

Best Match: Bryan vs. Owens vs. Ali
Worst Match: Kofi vs. The Bar
What I'd Change: Leave out the Kofi burial and just have Vince send him home.  Also this show should've been thirty minutes shorter.  The Becky storyline has been such a convoluted mess it's a wonder people are still excited about any of it.
Most Disappointing Match: Becky-Charlotte
Most Pleasant Surprise: The US Title match
Overall Rating: 7/10