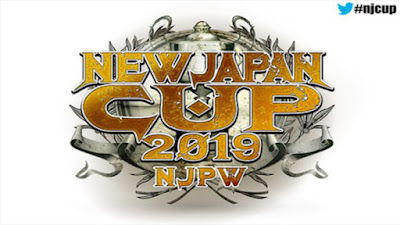 We're on the cusp of the biggest New Japan Cup in history, with a whopping 32 participants, the winner getting a shot at the IWGP Championship at G1 Supercard on April 6th.  Usually the winner gets the title match at Sakura Genesis, but the instant sellout Madison Square Garden show has replaced that on the NJPW calendar, and thus we're looking at the highest-stakes New Japan Cup tournament ever assembled.  But who's walking away with the Cup?  Let's take a look at the field. 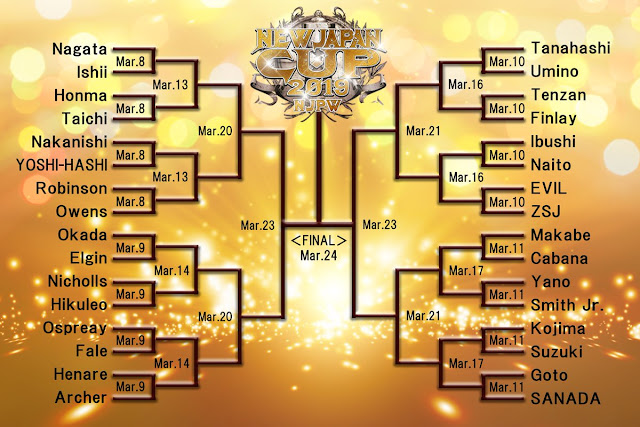 Phew - that's a lotta names.  Okay, of those 32 guys there are probably only ten or so realistic winners, at best.  I won't go through every match, as that would make this an interminably long column.  But let's see who believably has a shot of winning this whole thing.

Ok, this isn't a realistic winner really, but I'd still like to see the Stone Pitbull make it deep into this tournament.  I think he'll be in the quarterfinals against the next name I'm about to mention...

The US Champion has been laying pretty low since Tokyo Dome, aside from his successful title defense against Baretta at the New Beginning USA show.  He won't win this whole tourney either, but he'll face and defeat Ishii in the quarterfinals I think.

Okada has to be the favorite to win the whole thing, since they'll obviously want the biggest main event possible for this MSG show, and also because the original plan was Omega-Okada V.  IWGP Champion Jay White has simply been plugged into Omega's old spot thus far, so Okada-White seems the likeliest April 6th main event.  If Okada doesn't win this tourney I'll be surprised.

I'm hoping Okada's path to the semis goes through the NEVER Openweight Champ.  Okada-Ospreay at last year's Anniversary Show was quite enjoyable but they'd have a chance here to blow it out of the water, while further establishing Ospreay as a major force in the heavyweight division.  White vs. Ospreay is this year's Anniversary Show main event, so I don't see them booking it again at MSG.  But a quarterfinal loss to Okada wouldn't damage the Aerial Assassin's credibility whatsoever.

Another potential favorite is the Ace himself.  Tana's looking to avenge his abrupt title loss to Jay White, and a tournament win would set up a New Beginning rematch.  But I don't think that's the move here.  Instead I think Tana falls in the quarterfinals to....

Ibushi was the first tourney participant announced, after signing long-term with NJPW for the first time in his career.  I don't think those two events being announced together are a coincidence.  Ibushi is here to stay and the company is gonna push him hard.  I think we'll see Ibushi finally get a major win over his mentor/rival, on his way to an appearance in the finals.

Naito's an odd case here, slated to face Ibushi in the first round.  This is bonkers to me - why not put Naito against a lesser competitor to start with, so he can go deep into the bracket?  Sadly I think the Intercontinental Champ is destined for back-to-back first-round losses.

Another guy who could conceivably go fairly deep but won't win is Naito's second-in-command.  But like Naito he's booked against too strong an opponent in round 1, and I think he's getting the shaft.

Last year's Cup winner should absolutely not lose in the first round, particularly since the idea is to keep building him up as a top gaijin.  Sabre beats Evil but falls to Ibushi in the second round, I believe.

The last octet of this first round is pretty weak compared to the rest.  Suzuki, Goto and Sanada are the only three with any real chance of going deep, and only one mathematically can.  I predict Suzuki falls in round two.

I'm picking Sanada as an unexpected semifinalist, based on how the brackets line up.  He'll take out Goto in round 1, Suzuki in round 2, and probably Davey Boy Jr. in the quarters, before falling to Kota Ibushi in the semis.  But not a bad showing at all for the former tag champ.

As far as the first round goes, I think the pairings to watch out for are Nagata-Ishii, Okada-Elgin, and Ibushi-Naito.  All three should be G1 restaurant quality.

I'm going with Okada-Juice, and Ibushi-Sanada as the semifinals, leading to Okada vs. Ibushi in the finals, with The Rainmaker taking all the chips on his way to a Madison Square Garden title win over Jay White.  If this is indeed the tourney final we could be looking at the new Match of the Year.


This tournament looks like a lot of fun and I'm glad it's a wide enough field that we'll get four bouts per show for the first round.  It's a 12-day tour which means a whole lotta tickets sold.  If this works well we'll likely see a 32-man bracket every year going forward.  Should be a fun coupla weeks...

Posted by Justin Enuffa Ballard at 9:45 AM