Our next stop on the tour is the white-hot Bissell Brothers Brewing, located at Thompsons Point in downtown Portland, with a second branch in Milo, ME.  Bissell offers an eclectic roster of brews, with some core beers and some small-batch flavors.  The Portland taproom is bright and full of energy, with local artwork adorning the walls and tons of kickass merch for sale (I picked up a shirt because their logo is boss).  Sadly they don't offer tasting flights, but you can order full pours or pick up cans to go.  There's also a walk-up eatery called Locally Sauced next door, where you can grab some sober-up food while you're enjoying the beers.  This place was hopping when we visited and I get the impression that's generally the case.  Kind of a picnic atmosphere going on.  Picnic-plus-tasty-goddamn-beers.... 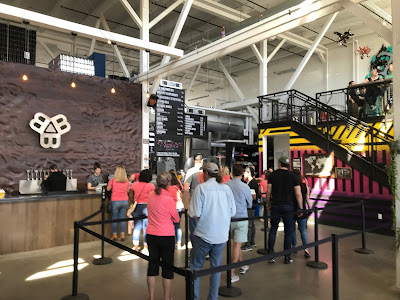 Nothing Gold (8.2%): Our hoppiest beer to date. Brewed to celebrate what was, what's next, and ultimately what is.

JB: This is one of those juicy IPAs that gives you flashbacks - tangy, hoppy, full-bodied, and tremendously addictive.  I've recently become a NEIPA aficionado and it's because of beers like this one.  My favorite of the bunch.


Umbra (7.5%): An oatmeal stout with Maris Otter base malt—this is our first dark beer to enter regular production.

JB: I love me a good stout, and this one is very rich but also kinda dry, with strong coffee and cocoa notes that don't overpower the beer.  Well-played..... 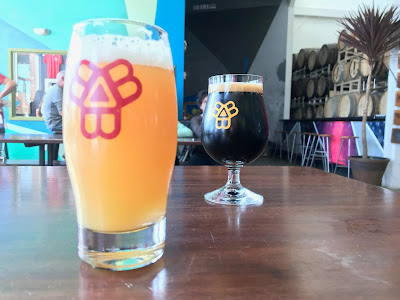 The Nuclear Whim With the Fuse of a Mile (7.6%): An IPA to celebrate our 4th year of existence.

JB: Another delicious IPA, this one was juicy and very smooth with a little sweetness but also had those earthy pine/weed notes you'd find in a Fiddlehead IPA.


Lucent (Small Batch, 4.9%): Meaning “glowing” or “lit from within”, Lucent is a traditional German-style Helles, derived from the German word hell which translates to “bright”, words which describe the look of the beer perfectly. The style was invented by Munich-based brewery Spaten in 1894 as a lighter version of their Oktoberbier. Longer fermenting and low hop addition create (ideally) a full-bodied, light colored pale lager that tastes biscuity, lemony, leans a little more towards the malty side of things, and has a dry finish on the palate. All of which serve to make this beer endlessly drinkable and, as some of us have taken to saying, a true guzzlebrau.

JB: Nothing super fancy about this Helles, it's just very easy-drinking and sessionable.  Perfect for a day on the beach.


Bissell Brothers is on fire right now and it's easy to see why.  The four beers we tried were all easy recommendations, and I look forward to exploring the rest of their roster.  The room is loud and busy, but it's a very fun ambience and gives the impression that you're part of something big.  Check this place out if you haven't already!

Posted by Justin Enuffa Ballard at 10:14 AM