Welcome to another Portland, Maine installment of Brewery Reviewery here at Enuffa.com!  We're goin' old school for this one, as we visit the longest-running American craft brewery east of the Rockies, Geary Brewing Company!

This was one of the more interesting Portland visits for us; from the moment we walked in, Geary's felt different from the new-school breweries nearby.  Located (unfortunately) about a half-mile down the road from the Industrial Way cluster of brewers (Beermuda Triangle), Geary's has a distinctly old-world vibe about it, and that carries over to the beers as well.  Founded in 1983, long before most people even knew what craft beer was, Geary's was the brainchild of David and Karen Geary, who had a passion for traditional British beers.  David studied across the pond to learn the techniques and brought them back to Maine, creating a UK-inspired pale ale that, at the time was unlike just about anything available in the US.  The Gearys have since sold the brewery and retired, but their recipes live on, among a slew of new flavors and varieties.  The Geary's staff was friendly and very knowledgable, sharing stories of Geary's long history as we tasted, making for a fun, relaxed experience.  The atmosphere at this place is almost quaint, in a good way, which sets it apart from the younger establishments.  And they had a long list of tasty brews to boot.... 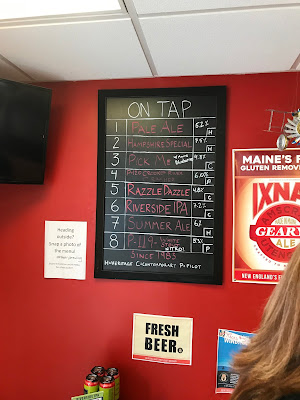 Pale Ale (5.2%): Our flagship is a classic British-style pale ale with a nod to the legendary beers of Burton-on-Trent.  It has a copper color with a malty body and medium mouthfeel.  Stone fruit sweetness complements the traditional bitterness of this ale.

JB: Not unlike Sam Adams Boston Ale, this flagship is a simple-but-flavorful English bitter, with a malt-forward palate.  Very easy to drink, it's like visiting an old friend (Did that sound pretentious?  I don't care).

JB: My favorite of the bunch, this special ale has a lovely blend of crispness and a bit of dunkel flavor from the yeast.  Me likey.


Pick Me (4.8%): Brewed with fresh Maine wild blueberries, this lager captures the unique, robust flavor profile of those tiny blue miracles with a clean, fresh finish in every sip.

JB: Several years ago I'd never have been caught dead drinking a blueberry beer, but I've come to appreciate them quite a bit, particularly the subtle ones.  This is one of those, with a unique purple tinge and light blueberry notes.

JB: This one is a flavorful lager in the vein of Yeungling, but better.  More flavor and more complexity. 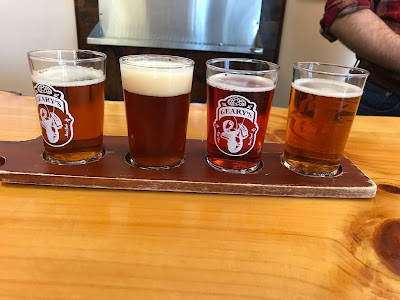 Razzle Dazzle (4.8%): Not too sour, not too sweet!  The subtle tartness of fresh raspberries in this sour lager is crisp and refreshing.  A perfect harmony for your taste buds.

JB: As you know if you read these reviews, I'm generally not a fan of sours, but this has some nice raspberry flavor that doesn't stomp all over the "beer-ness" of it.


Riverside IPA (7.2%): Abundantly hopped wth Mosaic, this unfiltered IPA has a sweet aroma and a slightly bitter finish.  With hints of citrus and pine, this beer is made to be enjoyed by all.

JB: Riverside is a nicely balanced IPA, slightly bitter but with some complexity underneath.  A little sweetness mixed with some light bitterness.


Summer Ale (6%): Summer is back for 2019.  This version of a British Golden Ale is moderately strong in alcohol, rounded in body, golden in color, and supports slight hints of fruit.  A remarkably refreshing ale for the dog days.

JB: I love a good summer ale, and this one boasts a dab of banana-esque yeast flavor with some citrus.  Great summer fare!

JB: This experimental brew was my least favorite of the day, kind of a Guinness-meets-coffee, but looks like Budweiser.  I found the coffee flavor a little too strong though, and I think if that were dialed down they'd have something. 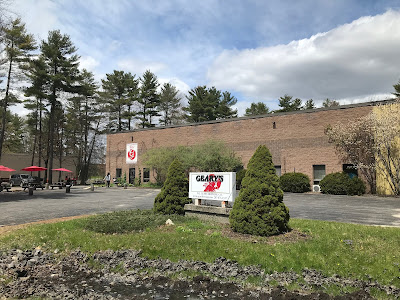 Geary's was kind of a refreshing break in the action for us, a back-to-basics brewery visit, with an old-fashioned ambiance and beers that are a throwback to a simpler time in craft brewing.  You won't find any candidates for the Bitter Wars or much in the way of juicy NEIPAs, but you will get to enjoy some delicious, UK-style flavors that would be right at home in a welcoming, smoke-filled English pub.  Any true beer enthusiast should check this place out and sample some of craft beer's rich history.