G1 Climax 29 has come to an end, after five crazy weeks of restaurant-quality matches on tap.  As always, the results have set up some fascinating threads over the next five months between now and the Dome, we got a first-time G1 winner, some inevitable top title matches have been set up, and we were treated to an incredible newsworthy angle to open up intriguing possibilities. 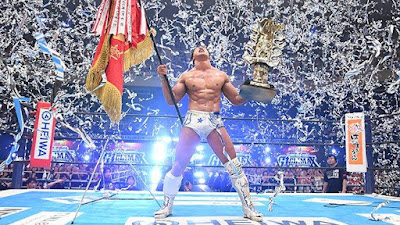 The tournament is always full of ongoing stories, and this year's was no different.  We had half a dozen G1 newcomers including the red-hot Jon Moxley going 5 for his first 5 matches and leading the B Block throughout, Shingo Takagi making the transition from Junior to Heavyweight and carving out a NEVER Openweight niche alongside Ishii and Goto, Kenta finding himself again after five years of WWE setbacks, Will Ospreay continuing his incredible year and stealing multiple A-Block shows, and for me the most pleasantly surprising, Lance Archer growing exponentially as a performer before my very eyes.  Archer is now my favorite superheavyweight in the business - dude's peaking at 41 and probably still hasn't hit his ceiling.  Give that man an Intercontinental Title run, stat.

Other notable moments and threads included Zack Sabre Jr. underperforming, dropping his first four bouts and becoming the first mathematical elimination, Jay White nearly doing the same before a late tournament rally that won him the block, Sanada finally earning a win over Kazuchika Okada in the final 13 seconds of the time limit, Kota Ibushi wrestling the entire tournament on a sprained ankle and still delivering ****+ matches, and as always, Tomohiro Ishii becoming the tournament MVP, delivering the B Block Match of the Night on six of his nine go-rounds.  Give that man an Intercontinental Title run as well!

The G1 final saw a blazing-hot heel turn by Kenta, who betrayed his Chaos partners and joined the Bullet Club.  His mentor Katsuyori Shibata attacked him as he was about to cut a promo, the first instance of in-ring physicality by Shibata since his retirement in 2017.  Does this mean.....  Shibata was then laid out by the Bullet Club before Kenta posed sitting on top of him.  If this means what I think it means....

But of course the biggest story coming out of all this is Kota Ibushi's emotional journey to his first G1 Climax trophy.  Ibushi dropped his first two matches but went on to win his last seven on the way to the Final, including a hard-fought win over IWGP Champ Okada.  In the finals Jay White took every shortcut imaginable to rob Ibushi of his destiny, but Ibushi was unstoppable, flattening White with three Kamigoye knees.  It would appear our WrestleKingdom 14 main event will be the Okada-Ibushi rematch, and for me this is the most exciting WK main event since Okada-Omega.  But Okada will have to get through Sanada and Minoru Suzuki (to whom he lost in a tag match), and Ibushi will have to defend his briefcase against Kenta and Evil.  Both of those matches were great, so I have no complaints about seeing them again.

NJPW's fall season is shaping up to be one of the more exciting since I've been a fan, and in September I'll finally get to see them in person.  Interesting times ahead.  As for the G1 itself, it was a great five weeks as always, though I'd place this tourney a step below 27 and 28.  It was maybe the best field they've ever had but I felt like there were fewer Match of the Year contenders than in the last two.  But that's a nitpick, I look forward to revisiting some of these bouts in the near future.


As always, here were my top ten:

The first classic of the tournament arrived on the third night, as LIJ's number-two guy overpowered the sentimental favorite to hand him his second loss of two.  ****1/4

In the other block the eventual co-finalist struggled similarly, as Ishii cut past White and Gedo's bullshit to put the Switchblade away with a brain buster.  ****1/4

The WrestleKingdom 13 rematch was bigger, more extravagant, and everything I could've wanted from these two.  Both men targeted each other's injuries, but Ibushi reigned supreme this time, finishing Ospreay with the Kamigoye.  Just excellent.  ****3/4

Moxley delivered maybe the best match of his career thus far, in an all-out brutal fight with the expert of this match type.  These two beat the bejeezus out of each other and it was 20 minutes of strong style perfection.  *****

5. Kazuchika Okada vs. Will Ospreay (Night 7)

The best match of the tournament according to me.  Ospreay went move-for-move with his mentor and nearly became the first Jr. Champion to defeat the IWGP Champ.  Everything about this match was perfect, my favorite moment was Ospreay's knife-edge chop that Okada sold like he'd be shot in the chest.  God. Damn.  *****+

Naito's first classic of this tournament was a stiff-as-fuck slugfest with the Stone Pitbull.  After 19 brutal minutes Naito picked up the win with Destino.  ****1/2

An epic war between LIJ buddies, this match pitted Naito's agility and cunning against Shingo's raw, rugged power.  Shingo kicked out of one Destino before falling to a second.  ****1/2

One of two wins that seemed to place Shingo squarely in the NEVER Openweight field, this was all-out war from start to finish, with both bruisers giving and taking every sledgehammer-like shot they could.  Shingo won with Last of the Dragon after 23 minutes, and we damn well better see a NEVER Title rematch.  ****3/4

The epic likely precursor to next year's Dome main event, Okada-Ibushi was 25 minutes of huge-time fighting.  Ibushi was undaunted staring across the ring at the Ace, while Okada took his time, knowing a draw for him was as good as a win.  The moment of the match saw Ibushi counter Okada's dropkick with a powerbomb and set up for the Boma Ye, only to be met out of nowhere with Okada's dropkick.  Just a poetic exchange.  After 25 minutes and multiple Kamigoyes, Ibushi stood tall as the A Block winner, all but guaranteed an IWGP Title match.  *****

This was about as old-school good vs. evil as I've ever seen in a NJPW ring.  White was accompanied to ringside by the entire Bullet Club despite having promised Ibushi he'd be there alone (of course White and Gedo also attacked Ibushi after the B Block final, bashing his ankle with a chair and leaving him laying).  Red Shoes immediately ejected the Bullet Club but allowed Gedo to remain, that is until Gedo tried to interfere only minutes into the bout.  Gedo was sent packing, and a methodical, story-heavy match ensued, with White using every imaginable heel tactic to gain an advantage.  Halfway through the ref got bumped, and out came Gedo, handing White a chair and holding Ibushi down so White could use it.  White locked in TTO while Gedo slid Red Shoes back in, but Ibushi made the ropes.  Ibushi mounted a comeback, using his superior striking ability, Gedo tried to interfere again, but Red Shoes called Rocky Romero over to remove him (the crowd EXPLODED for this).  Finally one-on-one, the final stretch was full of finisher attempts and reversals.  White hit the Blade Runner but couldn't follow up.  He went for another but Ibushi hit a Kamigoye, followed by a second.  White kicked out of the closest two-count you'll ever see, and Ibushi hit a third Kamigoye to win the match and the tournament.  This was a fantastic old-fashioned wrestling match with two clearly defined characters giving everything they had, and an absolutely nuclear crowd eating up every moment.  My only gripe was that despite all the work done on Ibushi's ankle it didn't seem to affect his moveset much.  But otherwise another excellent G1 Final with the absolute right winner.  ****3/4


This was the fifth G1 tournament I've followed from start to finish, and once again I was not disappointed.  There is nothing in wrestling quite like the G1; it's like the MLB playoffs for wrestling fans.  If you've never watched one of these things, you must.

Man, between the WWE-AEW war and NJPW shaking some things up, this fall promises to be full of memorable pro wrestling television.  The road to WrestleKingdom 14 starts now....


Posted by Justin Enuffa Ballard at 8:56 AM