Welcome to another edition of Wrestling’s Greatest Finishers, here at Enuffa.com!  Today I’ll be talking about the signature move of my all-time favorite wrestler, Shawn Michaels.  It’s been called the Crescent Kick, the Superkick, and most famously by HBK, Sweet Chin Music.  Whatever its handle, the side kick to the jaw has become an enduring, easily imitated maneuver. 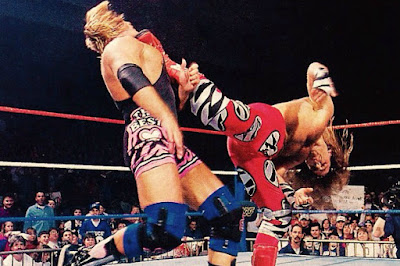 “Gentleman” Chris Adams allegedly created the move, but the first incarnation I ever saw was when Haku began using it in the WWF, calling it the Crescent Kick.  Haku was extremely agile for his size, and the Crescent Kick demonstrated his balance and flexibility while also carrying an aura of mystery appropriate to his South Pacific heritage.  For a while Haku was the only wrestler I remember utilizing the move.

Then The Rockers arrived.  Shawn Michaels and Marty Jannetty brought probably a dozen tandem moves with them to the WWF, one of which was the double superkick.  Initially I didn’t pay that move much attention given how much more spectacular most of their other offense was.  It wasn’t until that fateful Barber Shop segment in January 1992 that the superkick truly became a fearsome piece of in-ring weaponry.  In turning on his longtime tag partner, Michaels demonstrated how gut-wrenchingly sudden and devastating the move could be.

As a new singles star Shawn primarily used the superkick as a setup move for his teardrop suplex – a finisher I found pretty underwhelming for a former aerial master.  In the early 90s a heel couldn’t maintain heat if his moveset displayed too much flash, so Shawn kept his game grounded and opted for an arsenal designed to show off his newfound mean streak.  As he moved up the roster it became clear the teardrop wasn’t cutting it as a finishing move.  In non-wrestling segments Shawn would generally use the superkick to lower the boom on an unsuspecting rival, so it only made sense that he promote that move to his full-time finisher.  It was the perfect utility move he didn’t need to be in the ring to execute.

Eventually the superkick became such a huge part of Shawn’s moveset and persona he dubbed it Sweet Chin Music, a rather ingenious moniker for the smarmy young heel’s best move.  SCM would be instrumental in Shawn’s first main event heel push, as three errant kicks to the chin of his bodyguard Diesel over a few months would lead to the two feuding for the WWF Title.  Shortly thereafter Shawn became a babyface again (largely because his moveset started to display too much flash), and SCM was portrayed less as a vicious knockout blow and more as a display of grace and athleticism from a somewhat undersized giant-killer.

During Shawn’s WWF Title run he began foreshadowing the kick by stomping the mat as he waited for a groggy opponent to get back to his feet.  Personally I thought this practice softened the move a bit too much; part of SCM’s appeal was that it could happen at any time, from nearly any position.  Telegraphing it with a sequence of stomps struck me as excessively pandering to the crowd, and it robbed the move of its shock factor (which is what gave it so much power in the first place).

When Shawn returned from his four-year hiatus in 2002 though, SCM was restored somewhat to its former unpredictability.  He began using it unexpectedly mid-match as a game changer, after absorbing vast punishment from a heel opponent.  He’d still use it as a coup-de-grace, but in less obvious circumstances and occasionally to cap off a good match with an amazing finish; for example HBK vs. Shelton Benjamin 5/2/05 – Shelton slingshots himself off the top rope and is nearly decapitated on landing by a waiting Michaels kick.  For me this was the perfect way to utilize the superkick – a finishing move that could come out of nowhere and conceivably end the match at any time.

Several other wrestlers from that era made use of the side kick (Stevie Richards, Lance Storm, Justin Credible), and in recent years its become more of a setup move for guys like Dolph Ziggler, Seth Rollins, and of course the purveyors of the Superkick Party, Matt and Nick Jackson, but none has had anywhere near the success as Shawn at making the move such an identifying character feature, or such an exciting and celebrated move.  As with many of the great finishers, Sweet Chin Music is 100 percent believable as a match-ending shot, but simple and quick enough that it can happen at any point in the bout and could finish an opponent of any size or stature.  With a simple thrusting kick motion, Shawn was able to convey ferocity, elegance, dexterity, and brashness.  In other words, Sweet Chin Music captured perfectly the essence of the Shawn Michaels character.