Movie Review: Once Upon a Time in Hollywood (2019) 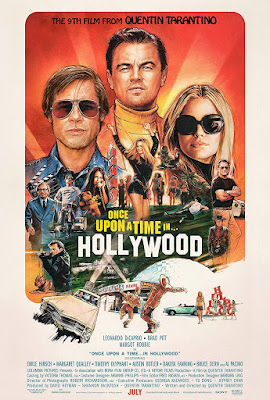 I left the theater after Quentin Tarantino's ninth film Once Upon a Time in Hollywood in a state of giddiness.  This movie will challenge you with its considerable 160-minute running time, the first third of which cuts a very methodical pace and has you wondering where and why it's going, but it comes together so well and so thoroughly in the third act it leaves you exhilarated by Tarantino's signature, balls-out audacity and eager to watch it again.

Boasting superb dual lead performances by Leonardo DiCaprio and Brad Pitt (who are being dubbed "the last big movie stars" due to the film industry's new reliance on spectacle and branding over star power to open a picture), OUATIH tells the story of an aging TV Western star and his stunt double/best friend, set against the backdrop of the Sharon Tate murders.  DiCaprio plays Rick Dalton, once a household name for his leading role on hit show Bounty Law, now struggling to stay relevant and making a living in one-off TV villain roles.  Brad Pitt is Cliff Booth, Rick's former stuntman-turned-gopher, content just to be his best buddy's personal assistant/handyman.  Leo is both pitiable and hilarious in a good ol' Southern boy turn that brings to mind Jon Voight in Midnight Cowboy, while Pitt brings his uncanny, affable charisma, relishing every moment in this Jeff Lebowski-esque role and often stealing the screen.  Both actors deliver some of their best-ever work here; DiCaprio's standout moments include a meltdown in his trailer after botching a scene and a subsequent triumphant take, Pitt's include a visit to the Spahn Ranch where he encounters the Charles Manson family.

The supporting cast is full of notable, colorful performances, with dozens of new and recognizable faces peppering the screen (Michael Madsen, Kurt Russell and other members of Tarantino's repertory pop up in cameos and he even refers to them in the credits as The Gang).  My favorites were Margaret Qualley as Pussycat, an aggressively provocative member of the Manson family, and Julia Butters as a precocious child actor with whom Rick Dalton shares a touching exchange.  Interestingly Qualley (daughter of Andie MacDowell) is one of at least three famous Hollywood children in the film; Kevin Smith's daughter Harley Quinn and Uma Thurman's daughter Maya Hawke (a dead ringer for her mother, both in appearance and voice) also appear as Manson girls.  And of course there's Margot Robbie as Sharon Tate, a role curiously sparse on dialogue, written more as an icon to be worshiped than as a fully fleshed out character, so her tragic real-life fate hangs over every moment she's onscreen.  Robbie imbues Tate with a simple, innocent beauty; she's a unanimously adored pixie whose star was on the rise until that fateful August night in 1969.

I won't go too deep into plot details as it's better if you go in cold, but this film is full of lovingly crafted details and tropes of late 60s Hollywood, so much so that multiple scenes simply involve a character traveling someplace either by car or on foot, just so Tarantino can show us how painstakingly he recreated the period.  Everything looks authentic, lived-in, grimy and decadent; a true homage to a bygone era.  I'd be lying if I said a few of the early scenes couldn't have been trimmed a bit to get us where we're going a little sooner; in the moment there were a few times I was restless to know where the trip was taking me.  The film's structure is unusual too; we spend most of the first two hours over a February weekend and then jump ahead six months for the third act.  But by the end everything fell into place for me and I couldn't help but marvel at the confidence with which Tarantino steered this film (like virtually all his films), taking it to places unexpected and pouring his love for acting and shot composition into every minute.

Like most Tarantino films, Once Upon a Time in Hollywood stuck with me long after the credits rolled - the performances, the morbidly dark laughs, the immersive minutiae, the historical elements...  I can't wait to experience it all again.


Posted by Justin Enuffa Ballard at 11:48 AM