Movie Review: Fighting With My Family (2019) 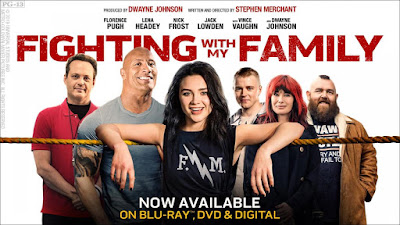 Wow, after 17 years WWE Studios has finally made a good movie.  The Paige biopic Fighting With My Family, written and directed by Stephen Merchant, is slyly funny, poignantly inspiring, oddly sweet, and quite superbly acted, while showing a respect for the craft of professional wrestling that's unusual for a Hollywood film.  More than respect actually, it displays a pretty intimate knowledge of what these performers go through to become successful WWE stars.  Of course that should stand to reason being that the film was co-produced by Dwayne "The Rock" Johnson, based on a UK documentary about Paige and her family.

Led by a wonderful Florence Pugh performance as Saraya Bevis/Britani Knight/Paige (Pugh absolutely shines in this role, conveying a touching vulnerability under the grizzled exterior of a young woman raised by wrestlers), the film also boasts strong supporting turns from Nick Frost and Lena Headey as her wrestler/promoter parents, Jack Lowden as her brother Zak who's worked his whole life for a shot in WWE, and a surprisingly compassionate Vince Vaughn as Hutch Morgan, the WWE coach/talent scout who has to be tough and cynical with his recruits but underneath has his own regrets about the business.
The story picks up in the early 2010s as Saraya and Zak, tasked with essentially carrying their parents' wrestling promotion as both its top stars (mostly wrestling each other) and trainers, are summoned to a WWE tryout at the O2 Arena.  Much to their shared surprise and dismay, Saraya is picked but Zak is not, leading to a very compelling sibling conflict that informs much of Saraya's difficulty fitting in when she moves to Florida for training.  Unlike her, the rest of the female recruits were not born into a wrestling family but have backgrounds as fitness models and cheerleaders.  Merchant's script includes an ongoing thread dealing with this difference in experience level and does a nice job of resolving it.

While Saraya is struggling in this fish-out-of-water scenario, Zak falls into a deep depression that echoes the fallout of his half-brother Roy's WWE rejection years earlier.  A later pivotal scene between Zak and Saraya is genuinely moving, as they grapple with his resentment at not being picked and her guilt at "stealing" his dream.  Pugh and Lowden have fantastic brother-sister chemistry and their conflict feels authentic while maintaining that classic British restraint.

Johnson's love of the business coupled with Merchant's talent for witty comedy with heart have yielded a very engaging account of one of WWE's most unlikely success stories.  The film takes some historic liberties - Paige was already NXT Women's Champion at the time of her main roster call-up, the Vaughn character was an amalgam of several trainers, The Rock didn't meet her until after watching the documentary that inspired this film - but the essence of the narrative rings true and is handled so well it elevates the film above its formulaic template.

I would love for WWE Studios to concentrate on making more films like this one.  Inspiring, real-life tales of wrestlers achieving their dreams, tragic stories of wrestlers who died young, that sort of thing.  WWE's history includes so many fascinating careers and characters they could make literally dozens of stirring biopics.  Move on from the B-list, direct-to-video action garbage and tell stories wrestling fans would actually be interested in.  Fighting With My Family should be the studio's new blueprint; hell, there's already a built-in shared universe...