WWE and The Oldberg Show, part 2

Sweet fucking Christ on a popsicle stick, did they just seriously take this indestructible monster heel they've been building nonstop for six months and job him out in under three minutes, to Bill fucking Goldberg??  Is this real life?  Am I having a stroke?  Is Vince? 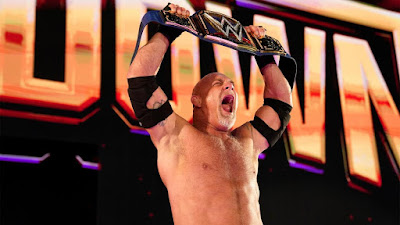 How sad is it that nine years later, CM Punk's infamous "pipe bomb" promo is just as relevant as ever?  Vince McMahon, year after year, keeps demonstrating how appallingly tone-deaf he has become as a promoter.  This guy in 2020 is so bad at building new stars he threw his hands up and put one of his two top championships on a 52-year-old WCW headliner who hasn't had a good five-plus-minute match since 2003, sacrificing the one current star he's been consistently building up over the last half-year.  And to boot, this scenario is just a rerun of 2017, when he did the same thing to Kevin Owens in 21 seconds.  Last October the Fiend basically got murdered with a hammer by Seth Rollins after taking eleven curb stomps, but still got up.  Yet he can't withstand four spears and the most feeble-looking jackhammer of all time?  This is just embarrassing.

Look, I have no problem with booking the dream match of Goldberg vs. Roman Reigns at WrestleMania (aside from the fact that Oldie can't actually take bumps or do more than a four-minute finisher-fest - but tell me more about how WWE main events are about psychology and storytelling...), but there was zero need for the Universal Title to be involved.  Zero.  Goldberg could've been booked to beat literally anyone else at Super Showdown to build him up for this.  Squashing The Fiend, who may not be a ratings-mover but nonetheless has sold a lot of merch, is 100% counterproductive and there is no rational argument to be made to the contrary.  Yay, Goldberg popped a rating on Smackdown.  Super.  So in five weeks after he drops the Title to Roman and goes away, then what happens?  The ratings go right back to where they were, yes?  So what long-term benefit comes out of this?  Spoiler alert: none.  And anyone who thinks Roman won't get booed like crazy for beating the beloved legend is delusional.  We're going right back to 2017 when he beat Taker.

Elsewhere on that Saudi shit sandwich, we got to see AJ Styles lose to the 55-year-old Undertaker, in 20 seconds, after a single chokeslam, allegedly to set up another 'Mania dream match.  But who the fuck wants to see that now?  AJ lost clean after one move.  Why should I care about seeing the heel redeem himself?  Speaking of delusional, Vince, Taker and anyone else who thinks the near-senior Dead Man is physically up for a match reminiscent of his 2009-2010 feud with Shawn is not being honest with themselves.  That feud was a decade ago, and in 2020 Taker can barely walk around comfortably.
Oh, and then there was Brock Lesnar killing Ricochet in 90 seconds without allowing Ric to execute a single offensive move.  What in the name of all things holy, THE FUCK, was the point of that?  What did Ricochet gain by being in this match?  All it proved was that he doesn't belong in the WWE Title picture.  Like, you couldn't have done something similar to Brock vs. Finn?  Go eight minutes and make it look like Ricochet might just pull off the impossible?  At this point any indy talent who signs with WWE for anything other than the money is living in a fantasy world.  Aside from the cash, you will leave that company worse off than you went in.  That is undeniable now.

So let's look at the WrestleMania 36 lineup as it now stands.


Thank Christ for the women, is all I can say - those are currently the only matches I'm interested in.  Of the five men's matches either announced or soon-to-be announced, four of them feature a nostalgia act and the fifth has Brock.  At least with Brock-Drew they're trying to crown a new top star (though as I've said before I just don't see Drew as that guy, particularly since they did nothing meaningful with him in two years prior to his Rumble win), but the rest of these matches have basically no long-term benefit.  Okay, so AJ beats Taker at 'Mania.  Wyatt gets the win over Cena he should've gotten six years ago (too little, too late).  Reigns has a little spear-fest with Goldberg (These all-finisher matches aren't special or exciting when you do them ALL THE TIME).  Edge gets a chance to end his career on his own terms (Nothing against Edge, and if he were the only comeback story here I'd be fine with it).  Cool, then what?  How does WWE plan on maintaining ratings and interest after Bill, John, Mark and Brock go home?

Contrast this lineup with last year, when the focus of almost every big match was on the current stars and building for the future.  We had four old-timers included but they were booked in special attraction matches, and none of them was anywhere near a top championship.  Triple H and Batista fought each other, Shane McMahon fought The Miz, and Kurt Angle fought Baron Corbin.  Both of the top men's title matches were about a new or renewed main event babyface push (both of which the company ultimately fucked up of course).  The main event of the show was a match to crown the hottest star in the company as its new face and to make history with the first-ever women's WrestleMania headliner.  Flawed and overlong though the show was, at least the company was making a real effort to look ahead.  This year?  None.  It's back to loading the show up with old-timers while the majority of the current roster fights for scraps.  Seth Rollins vs. Kevin Owens?  Maybe.  Strowman defending the Intercontinental Title?  Probably.  Where's Daniel Bryan?  How is there no clear plan for him whatsoever?  Hey, here's an idea, remember that time Shinsuke Nakamura signed with you, in the hopes of eventually wrestling Daniel Bryan for the first time ever?  Bryan's been back for two years now, he's on the same show as Nakamura, AND one's a babyface and one's a heel.  Could ya maybe book that so we have an actual good in-ring men's match to look forward to?

Imagine if NJPW loaded up WrestleKingdom with guys like Yuji Nagata, Jushin Liger, Tenzan and Kojima in most of their top matches.  Imagine if WrestleMania III featured Bruno, Killer Kowalski, Blackjack Mulligan and Bill Watts in four of the five top matches instead of focusing on the stars of the 80s.  How much of a laughingstock would they look like?  This is what WWE is now.

I know I say this most years lately, but WrestleMania once again looks like an absolute chore to sit through, at best.  Aside from WM30 and WM34 (and last year's to a lesser extent) I haven't been genuinely excited for a WrestleMania since 2012 (and that one disappointed me).  This is not how this is supposed to go.  A thirty-plus-year fan like me should not be dreading sitting through the biggest show of the year.  I've been a WWE Network subscriber since the first week it was available, and despite WWE giving me so many reasons to cancel in six years I've held off, giving them the benefit of the doubt that they'll deliver the goods when it counts.  But ya know what, I'm tired.  I'm tired of having to get upset when they make completely illogical, counterproductive, industry-damaging creative decisions.  I'm tired of getting invested in new characters and compelling talents only to see Creative totally and unequivocally clusterfuck their pushes until they can't even get the live crowds to care about them anymore.  I'm tired of seeing my favorites being used to either put over a nostalgia act or to put over a new star who will ultimately just get fed to an old guy in a matter of seconds (How'd that Kofi push work out?).  I think I've reached my breaking point.  I'll watch NXT Tampa and WrestleMania 36, and then I think I'm done as a Network subscriber for the foreseeable future.  There are two wonderfully enjoyable industry alternatives in New Japan and AEW, plus a host of other companies far more deserving of my money.  WWE has made it clear they don't value longtime fans like me anymore, and they certainly don't care about creating the next generation of stars as long as that Fox cash and that Saudi blood money keep rolling in.  So fuck 'em.  They're late-era WCW to me at this point.  Vince has become what he used to despise.  Fuck, look who their Universal Champion is....