The History of NXT TakeOver: Portland

The NXT brand once again delivered a killer TakeOver special, stringing together six good-to-excellent matches with nary a low point on the card.  While for me some matches went too far in a few places and the show lacked a true MOTY contender, NXT Portland was nonetheless a tremendous effort. 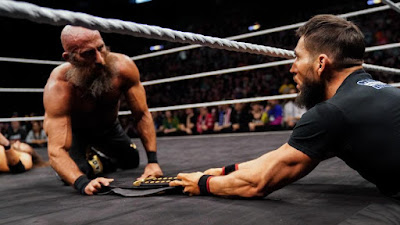 The show kicked off with the North American Title match, pitting old rivals Keith Lee and Dominik Dijakovic in a hard-hitting power battle.  These two powerhouses threw everything at each other, including a few death-defying dives and a climactic Spanish Fly off the top rope from Dijakovic.  The crowd was red-hot for this and every match, and bought into all of it.  Lee and Dijakovic's chemistry was very evident, as they've been working together for years, and this felt like NXT's version of a crazy indie match.  My only complaint was that after the Spanish Fly spot, Lee kicked out, Dijakovic went for a power move but his back gave out, and Lee just finished him with the Big Bang Catastrophe out of nowhere.  That felt like a parody of the WWE-style finish, where one guy seemingly has the match wrapped up but the other guy does his big move suddenly and wins.  Aside from that though, this was really good.  **** 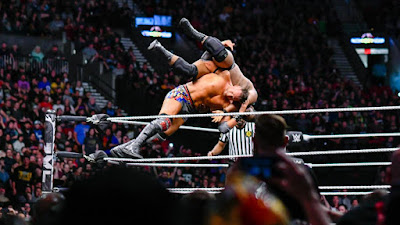 The surprise hit of the night for me was the Tegan Nox-Dakota Kai Street Fight, which was shockingly violent, crisply worked, and exciting all the way through.  It was probably still the weakest match of the night by default, but that's not a knock on the match itself.  Nox and Kai did some spectacular stuff, including a German suplex on a trash can, a top-rope chokeslam, and a top-rope Molly Go-Round.  The story was that Nox was so preoccupied with punishing Kai, she declined to go for the pin after a Shining Wizard and instead put her on a table and put a chair around her head with the intent of Pillmanizing her, but Raquel Gonzalez tossed her off the top rope on to the table (another brutal-looking spot, as the table didn't break but instead tipped over on contact), allowing Kai to get the pin.  Damn good fight.  ***1/2 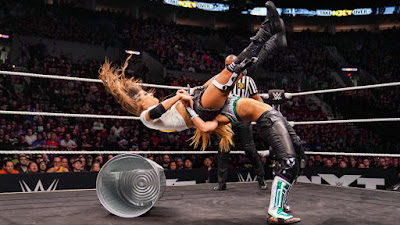 Next up was the one I was looking forward to, Finn Balor vs. Johnny Gargano.  These guys put on a classic-style wrestling match that went a fast 27 minutes and built from technical grappling to big violent moments outside the ring.  They went hold-for-hold for much of the first half, a welcome change of pace from the first two bouts, and ratcheted up the intensity in the second half.  Late in the match Balor hit a front suplex on an announce table and then ran across both tables to deliver a shotgun dropkick, before hitting the Coup de Grace and 1916 in the middle of the ring for a decisive, squeaky clean win.  This was pretty shocking actually, I figured Balor would have to cheat somehow.  I wouldn't be surprised to see Balor get the shot at Cole in April, especially considering what they set up later in the night.  But we'll get to that.  Balor-Gargano did not disappoint.  ****1/4 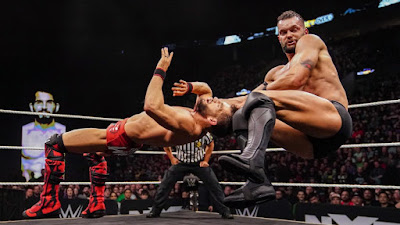 Rhea Ripley had one of her best showings to date against Bianca Belair, in another power war.  Both women looked great here, with Ripley actually fighting from behind for much of the match thanks to Belair's superior strength and athleticism.  At one point Belair dropped her with a Gorilla Press, a move I hadn't seen since probably the early 90s.  The match found itself on the turnbuckles, where after a struggle Ripley hit a Riptide off the second rope to retain.  Post-match, Charlotte attacked Ripley and announced that she accepted her challenge for WrestleMania (Okay, now I'm fine with Charlotte winning the Rumble).  She also whipped Bianca into the ring steps on her way out.  Very solid stuff here.  ***1/2 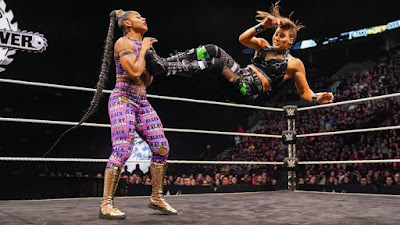 The Tag Team Title match got off to a sudden, wild start as Matt Riddle mocked Bobby Fish on his way down to the ring, and the champs got angry and attacked the challengers in the aisle.  From there this match was basically nonstop action, with a ton of back-and-forth tandem offense and some traded grappling and submissions late in the match.  I was actually a little sad they didn't start with more grappling given the considerable skills of all four guys in that area.  But this was an excellent tag team match that built to a ton of nearfalls and culminated in the Broserweights hitting their finisher and winning the straps.  The crowd exploded for the title change and I was happy to see Riddle win his first championship.  ****1/2 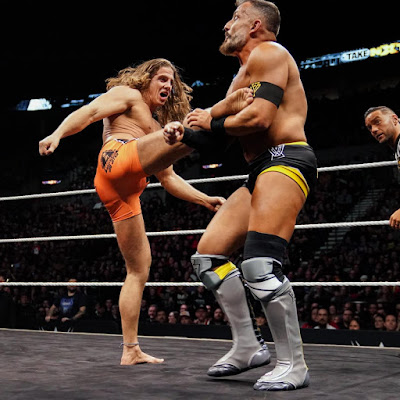 Now for the epic main event.  Adam Cole vs. Tomasso Ciampa was on its way to being an easy Match of the Night winner and Match of the Year contender, and then the last five minutes kinda ruined it for me.  Don't get me wrong, this was still great, but it could've been five stars had they exercised some restraint in the final minutes.  This 33-minute match started out with airtight grappling and chain wrestling, and slowly but surely built to a high-wire act.  At one point Cole hit Ciampa with a wheelbarrow suplex into the announce table that looked like it should've take Ciampa's head off.  Ciampa later returned the favor with a second-rope Air Raid Crash, a callback to the one off the top of the WarGames cage in November.  Late in the match the action spilled out of the ring when Cole went for Panama Sunrise on the apron but Ciampa hit an Air Raid Crash instead, and Cole came back with a Panama Sunrise off the announce table, on the floor.  And right here is where the match lost some credibility for me.  Ciampa barely sold this crippling move, almost immediately rolling into the ring and hitting Cole with a draping DDT.  That moment was a perfect illustration of the overuse of the Canadian Destroyer as a move.  One of the most spectacular finishers ever conceived has now become just another move everyone easily gets up from.  Cole's Undisputed Era buddies ran down at that point and interefered several times but Ciampa either thwarted or recovered from their attempts over and over.  Finally Johnny Gargano came down, prevented Ciampa from using the NXT belt as a weapon, and hit him with it, allowing Cole to pin him and retain.  After all the insane finishers and interference from which Ciampa was able to bounce back, a belt shot is what did him in?  The final minutes of this match were an exercise in excess, and they really took me out of it.  I loved it up to that point.  I get protecting your babyface challenger, but the Gargano moment would've felt much more heartbreaking had it been the only interference and had Ciampa not kicked out of multiple finishers before that.  It just all felt like piling on.  I laugh when WWE loyalists claim NJPW does too many finisher kickouts.  This right here is a prime example of WWE's over-reliance on them.  On balance though I'll give the match ****1/4. 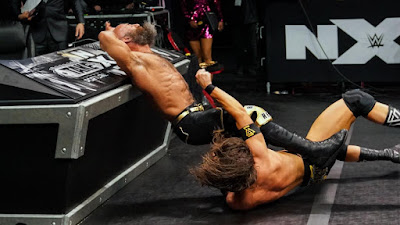 So yeah, NXT Portland was a fantastic show in a long line of great TakeOvers.  For me it was missing a match on par with Cole-Gargano from last year, and the ending was simply overindulgent.  All that aside though, this show is a very easy thumbs up.

Best Match: Undisputed Era vs. Broserweights - it was the best executed match for its type
Worst Match: Tegan Nox vs. Dakota Kai, by default.  If that's your worst match, you've put on a helluva show.
What I'd Change: Like I said, tone down the outlandish final moments of the main event and you'd have a five-star classic.
Most Disappointing Match: I guess the main event for that reason
Most Pleasant Surprise: The Street Fight
Overall Rating: 9/10