2008 was rather an uneven year for film.  The good stuff had a lasting impact, but there honestly wasn't a ton of it.  A few films ended up a little disappointing, like The Incredible Hulk (I know I'm in the minority but I greatly prefer Ang Lee's moody, cerebral Hulk of 2003 to the dumbed-down Edward Norton version) and Indiana Jones and The Kingdom of the Crystal Skull (ya know, the Rocky V of the series - the one we'll all pretend never happened).  But 2008 featured a few films that have undoubtedly earned permanent real estate in the pantheon of their respective genres. 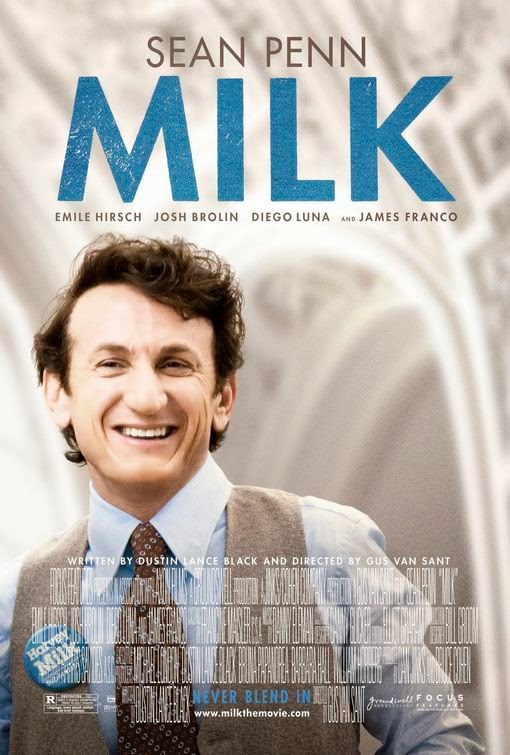 Gus Van Sant's biopic about the first openly gay politician to be elected to public office stars Sean Penn in an Oscar-winning performanceas Harvey Milk.  Milk moves from New York to San Francisco and begins campaigning for office as a way to expand gay rights, amid multiple attempts by the religious right to treat homosexuals as a threat to the community.  The film covers the later years of Milk's life as he becomes a fixture in San Francisco's Castro neighborhood, building relationships with disillusioned gay citizens and becoming a beacon of hope for the disenfranchised.  His mission eventually puts him at odds with fellow City Supervisor Dan White (Josh Brolin), an outspoken gay rights opponent.  Van Sant uses quirky, inventive visuals to tell this story often assembling shots in very unexpected ways.  Case in point is a scene early in the film where a young gay man is being assaulted - his glasses are knocked off his face and we see the rest of the incident in a warped closeup through one of the corrective lenses.  This scene could have been a standard one illustrating the contempt these people faced every day on the streets, but Van Sant creates a claustrophobic mood and leaves much of the event to the imagination.  Penn and Brolin are both excellent as the two central characters.  Penn eschews a potentially caricatural performance and gives Milk three dimensions, showing us just how brave and dedicated this public figure was.  Brolin plays White as a spiteful, insecure opportunist who only seems to warm up to Milk's cause when it will benefit him politically.  I went into this film expecting a sort of sterile biographical account, but Van Sant is able to convey the passionate weight of Milk's struggle, allowing us to be emotionally, and visually, engaged. 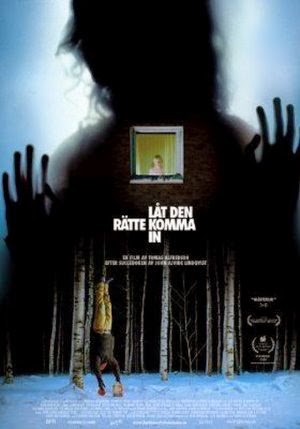 Finally a vampire film that transcends the genre and treats its subject with deadly real-world seriousness.  Based on the novel by John Ajvide Lindqvist, this film concerns a socially awkward, chronically bullied 12-year-old boy (Oskar) who befriends and becomes intimately close with a young girl (Eli), who happens to be a vampire.  The story closely follows both characters; Oskar has no friends and is routinely harassed and taunted by his classmates, and Eli perpetually roams about with a man who seems to be her father and whose nightly task it is to kill strangers and collect the blood for her to live on (without being caught by the authorities of course).  Both kids live a desperately lonely existence as outcasts, and so they find comfort and identification in each other.  Eli teaches Oskar that he needs to stand up to his bully classmates, and Oskar shows Eli how to care for and trust another person.  This film is beautifully directed and features outstanding performances from child actors Kåre Hedebrant and Lina Leandersson (eerily voiced by Elif Ceylan to give Eli an otherworldly maturity).  Let the Right One In is an unequivocally horrific film, but at the heart of the story is a deeply touching relationship between the core characters.  If you were to remove the vampire element of the story it would still work as compelling drama.  This is also a film that audiences of any age can relate to.  Adults will empathize with the characters' profound longing for companionship, and children will understand how difficult it is to feel at home in their own skin.  This is a wonderfully moving film that demonstrates just how gripping a vampire story can be. 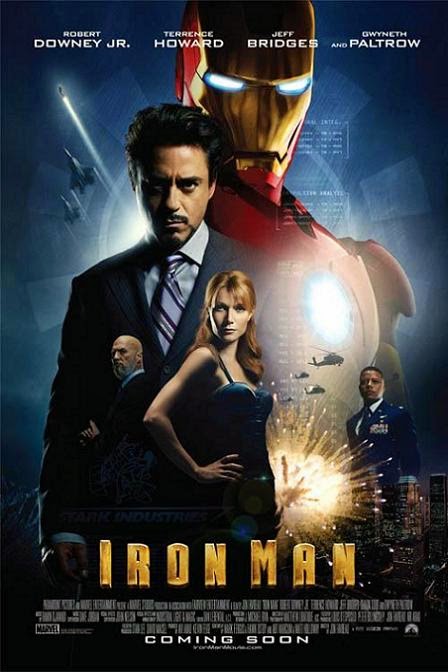 2008 was the year the superhero film began to transcend the genre, starting with Jon Favreau's Iron Man.  Robert Downey stars as billionaire industrialist Tony Stark, in the role that just may define his career.  Stark's company is primarily a weapons manufacturer until he is taken hostage by a Middle Eastern terrorist organization and has to invent a militarized suit of iron in order to escape.  He then dedicates his life to fighting terror and developing clean, renewable energy from an arc reactor, the device that saved his life.  Iron Man is a rare summer action movie that cares much more about the characters and their relationships than about blowing stuff up.  Upon his return to the States, Stark develops romantic tension with his personal assistant Pepper Potts (Gwyneth Paltrow), and professional friction with his mentor and right-hand man Obadiah Stane, who is deeply concerned about Stark's decision to shift away from weapons development.  Stane is played with casual festering menace by Jeff Bridges.  Iron Man is one of the best of all superhero origin stories, and was the launching pad for the Marvel Studios movie series after they took full control of most of their film properties.  Director Favreau really understands these characters and along with Downey creates an inspirational but flawed hero in Tony Stark.  Despite his tremendous swagger we see him falter as he creates his alter ego.  The fantastical material is handled in a realistic way so we're always able to identify with Stark and understand how his technology works.  I found the climactic action sequence a bit silly, but it was fun and didn't overstay its welcome, and most of all it was kept pretty understated by today's CG action standards.  No epic citywide obliteration or massive collateral damage, just a battle of wills between the two principle characters.  Iron Man is the first in a series of comic book films that have helped redefine the genre and put Marvel's characters at the forefront.  That the filmmakers were able to take a B-level Marvel character and make him a household name demonstrates how adept they were at creating a relatable hero. 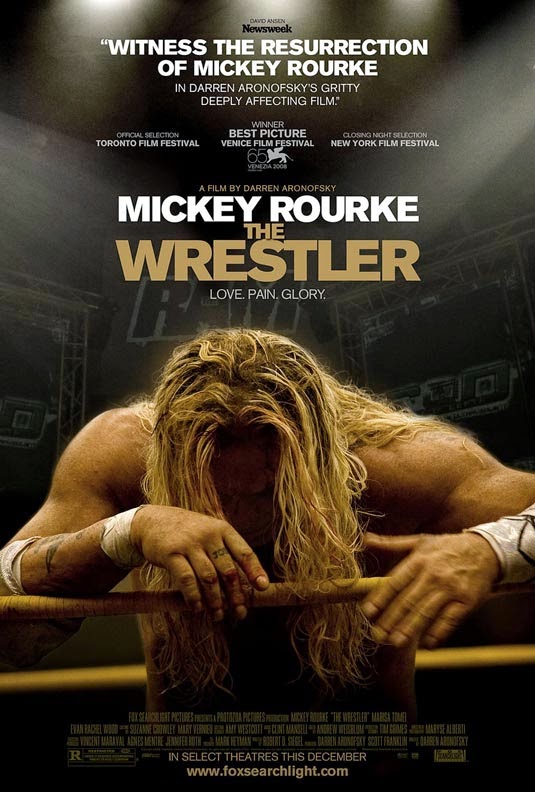 Darren Aronofsky made a return to form after his lackluster sci-fi pseudo-epic The Fountain, with this intimate low-budget film about an aging pro wrestler twenty years removed from his wildly successful prime.  Mickey Rourke stars as Randy "The Ram" Robinson, who now wrestles for small independent promotions in New Jersey to supplement his income as a grocery store deli clerk.  Robinson was once a major headliner and adorned the covers of many a wrestling magazine, but failed to save for the future and now lives in a trailer, barely able to make ends meet.  Rourke doesn't so much portray Robinson as he inhabits him, and I can't imagine any other actor in this role.  He spent months rigorously training with actual pro wrestlers to make the in-ring scenes believable, and the results show on the screen.  Robinson wears his jaded sadness like an overcoat, spending every day wishing it were still 1988 when the world held Randy The Ram up as a folk hero.  The only time he feels at home in his own skin is when he's simulating fights in the squared circle.  After being sidelined with a heart attack and told he can never wrestle again, Randy decides to attempt a reconciliation with his estranged daughter Stephanie (Evan Rachel Wood), whose resentment for him is so intense it's almost palpable.  He also develops romantic feelings for a stripper he often patronizes, played by Marisa Tomei in a wonderfully sympathetic performance.  Ultimately The Wrestler deals with Randy's inability to redefine himself as his situation requires.  Being a wrestling hero is all he knows how to do, and the love of the crowd is the only kind he fully understands.  This is the best feature film I've ever seen about professional wrestling. 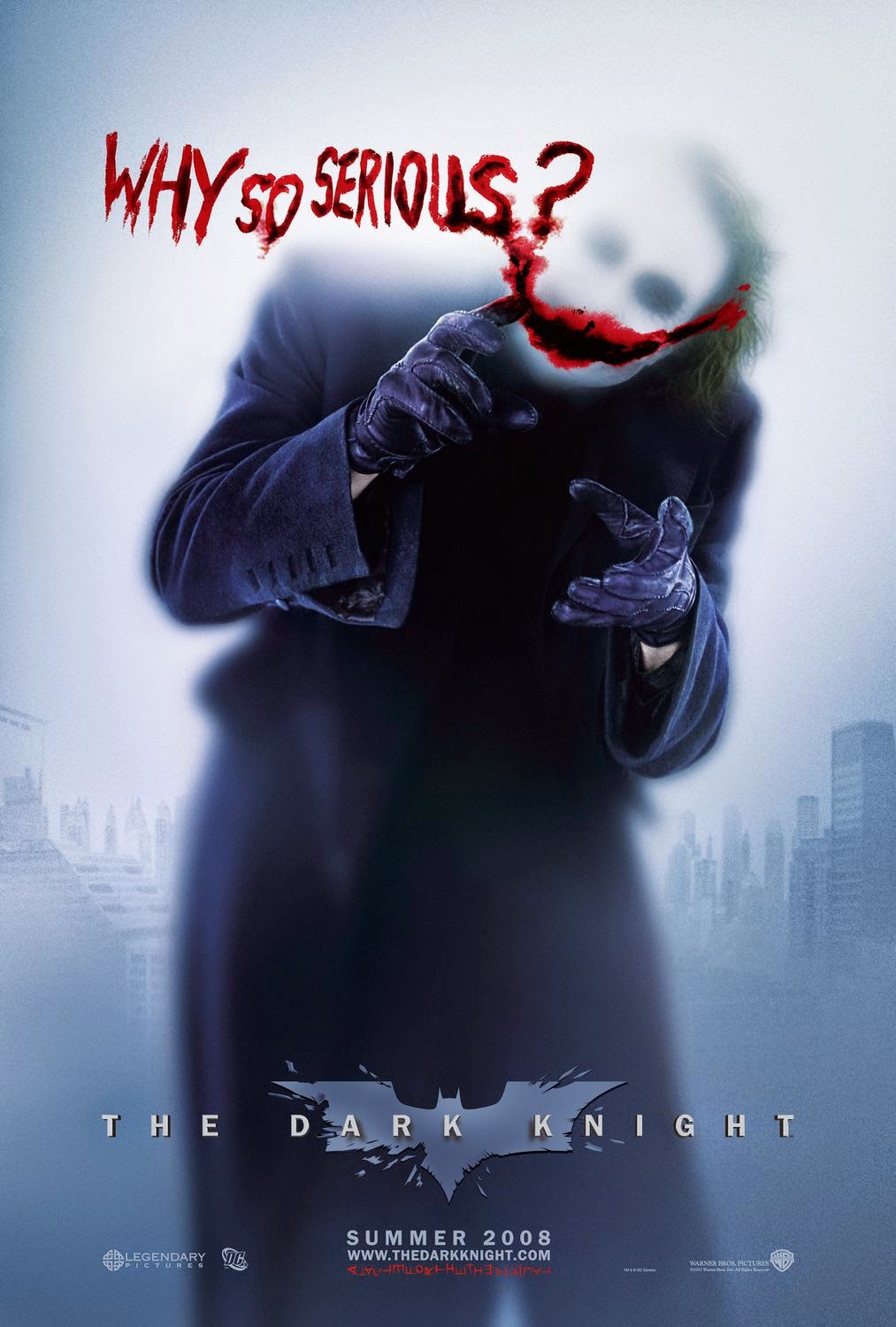 What can I say about this film that hasn't been said already?  The Dark Knight is a masterpiece, not only of the comic book genre, but of cinema itself.  Christopher Nolan's sequel to Batman Begins is unbound by the limits of the superhero genus.  It is a sophisticated crime drama about a man who dresses up as a bat, mired in a good vs. evil duel with a terrorist who dresses like a clown.  At stake is the soul of Gotham City's entire population, in particular the heroic new District Attorney Harvey Dent.

Christian Bale reprises his tailor-made role as Bruce Wayne/Batman, Aaron Eckhart portrays the tragic hero Harvey Dent, whose character arc is central to the story - make no mistake, this movie is not primarily about Batman or the Joker.  The Dark Knight chronicles the rise and fall of Gotham's "white knight" Dent, whose unorthodox war on crime is so effective it almost looks like Batman's services will no longer be needed.  Gary Oldman is superb as Commissioner Jim Gordon, whose realist approach often puts him at odds with the idealist Harvey.

Of course the iconic performance of this film belongs to the late Heath Ledger as the living, breathing personification of evil, The Joker.  Ledger's facepainted villain is without remorse or decency, acting purely on deranged whim.  The Joker is pure id - unchecked, murderous hostility.  His only desire is to create anarchy and laugh at the results.  Ledger's performance is one of the all-time great cinematic portrayals, and will forever be a yardstick for future film villains.

Nolan grounds this comic book universe in gritty realism, bestowing purpose on all of Batman's gadgets and setting up most of the climactic scenes as dialogue-driven exchanges of ideas, rather than relying on special effects and explosions.  The centerpiece of the film for me is the interrogation scene between Batman and The Joker, where the two mortal enemies try to dissect each other's viewpoints.  Nolan and co. perfectly capture the ongoing relationship between the two that borders on codependency.

The Dark Knight is easily the greatest comic book film of all time, but also much more.  By populating the film with authentic characters and action, Nolan has created a film that stretches far beyond the superhero genre into simply being a great film.  This is a near-perfect cinematic experience.