Well football fans, now that the crap from Wild Card weekend has been dealt with, we're left with the cream of the crop. Except for the cream being no Antonio Brown, an injured and old Peyton Manning, possibly no Big Ben, a shattered core of Patriots...and who cares about the NFC. Here's some uninformed picks.

KC @ New England -4.5 THE PICK: NEW ENGLAND
Gotta stick with the Pats here. I don't care about fake weed, I don't care about how injured Gronk may or may not be and I damn sure don't care about the "explosive" offense of the Chiefs. Facts are the Pats rarely ever lose at home in the playoffs. I expect the Pats to destroy the Chiefs tomorrow afternoon and leave them lying in the gutter to die like a bum, like a dog, like a mutt, like an animal!


Pittsburgh @ Denver -7 THE PICK: DENVER
Pittsburgh has decided they want to play this game with about 8 healthy guys. This game should be called off due to lack of competitive balance. Big Ben may not even play, and if that's true, Miggsy's got a better shot of getting a handy after his lady's bridal shower tomorrow than the Steelers have of moving on in the playoffs. Of course, Peyton is starting, so his noodle arm could definitely help the Steelers here. I’m still taking Denver, I think they can outscore Pitt on defense alone.

How ‘bout them Bengals? There hasn’t been a larger collection of idiots all in one area like that since the last Miggsy pool party. Gotta love 'em, though. There are few things more reliable than a Cincy meltdown on Wild Card weekend. Then there was the Minny-Seattle game. Blair Finkle missing that chip shot will haunt Viking fans for eternity.  Even Scotty Pickles and his dead foot might've made that kick. (Never). I’m sure there is more craziness in store for round 2. As a Pats fan, I’m quite nervous. Even against Andy Reid and his mustache. Lot of weird things going on in Foxboro this week. Bill looks like he took a right hook from Tyson. Gronk has multiple limbs on the injury report. Jones is having fake weed trips. Cats & dogs living together! MASS HYSTERIA!!! On to the picks.

Green Bay @ Arizona (-7) – The Pick: ZONA -7
I realize Green Bay looked good last week. But they played Washington, who was in the playoffs by virtue of winning a horrid division. Arizona is just better plain and simple. These teams played each other 3 weeks ago. And remember how that turned out? The Cardinals DESTROYED them. It was like pistol-whipping a blind kid out there. The Arizona defense tortured Rodgers. They did everything to him short of fucking his mother. Hey that may be vulgar, but you saw it. It was uncomfortable for all of us. The Cardinals won’t win by 30 again, but they’ll cover the spread. Zona advances 31-20.

Seattle @ Carolina (-1) – The Pick: CAROLINA -1
This line clearly represents the public money coming in heavy on Seattle. It’s understandable. They’ve been in the last two Super Bowls, and the casual fan knows them well. Plus they get an overwhelming amount of respect from NFL people. More respect than what Danny gets from fast food people. But the fact is if it weren’t for Lois Einhorn, Seattle would be playing golf this weekend. Sherman knows this… 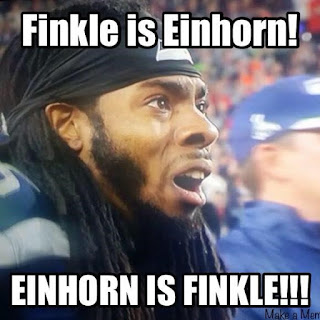 Now they get a much better opponent in Carolina. Lest we forget the Panthers went 15-1. I’m not saying this team isn’t beatable, but they should be getting more credit at home than 1 point. I don’t see the MVP, Cam Newton, laying an egg this week. Unless "laying an egg" is a new form of dance. Otherwise, there will be dabbing and nae-naes and things of the such. (I can’t keep up with what the kids do nowadays) Panthers win 27-23.

I guess Chandler Jones and I were on the same shit when I picked the over in the Seattle/Minny game last week. You know the one what was played outside at sub-zero temps. It was the 3rd coldest game in NFL history. How could that possible go over? I have no idea. After hangin' out with Jones, everything I ate tasted like peaches. And I forgot how to multiply. I could subtract, but I couldn't multiply. If I'm fucking 6 women 3 times a day, 7 days a week, how many times per week am I fucking? Was it 10? Was it 130? Was it 16? I was tripping out.

Seattle Seahawks @ Carolina Panthers -1 PICK: Carolina -1
I assume all three of us are gonna be on this one. This line is far too low for me not to take it. I am hesitant though, Carolina has royally fucked me before in the playoffs. Shout-out to Jake Delhomme and the boys! I’m hoping this defense at home makes the difference this time around.

Kansas City @ New England O/U 42 PICK: OVER
Like any true degenerate, I’m right back on the “over” horse this week. I’m expecting a high scoring tight game. 27-21 Pats.