Due to popular demand, I’ve been summoned to put forth some thoughts on Sunday’s Royal Rumble. (Just what this site needs, another wrestling blog). Why anyone would concern themselves with this fake clusterfuck while the NFL Conference Championships are going on is beyond me. I guess dorks will be dorks. Anyways, the Rumble is one of WWE main attractions. Or so I’m told. Something between 30 and 400 wrestlers all fight until there’s one left. Apparently this year, the last guy standing will be crowned the champion, whereas most years it just means he gets a future match with....oh who gives a shit?! Let’s get on with this façade about a façade... 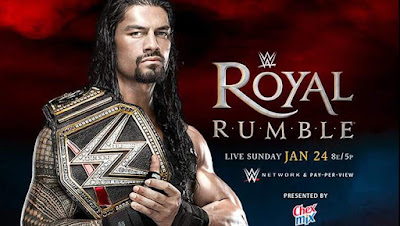 These two again? I guess these fellas aren’t friends. Isn’t there anyone else in their division? Does the WWE have divisions? There’s gotta be some kind of class system so I’ll just assume yes. These bums are clearly in the “Dumb-Looking, No Star Potential” division. In fact, they’re so dumb-looking I’m surprised this match isn’t being held in a Manitowoc County junkyard. And just looking at their stupid faces leads me to believe they don’t have the best “mic skills”. I imagine it’s just a serious of grunts and then they club each other over the head. But not really, because they play pretend in this “sport”. Christ al-fucking-mighty how is this shit so popular?

The Pick: Owens gets revenge and the belt back after he tells Ambrose his shoes are untied and hits him with the Short Bus Suplex when he looks down. Don’t be so gullible, McFly.

Someone please explain to me how this is 3 wrestlers versus 2. Actually don’t, because I don’t care. This is a simple numbers game. I realize they only fight one at a time, but New Day has a deeper bench. That’s an invaluable asset. Just look at the years of success for the San Antonio Spurs or the Patriots. Oh, sorry.  Forgot my audience. Allow me to explain. See, those are teams in REAL sports. (Quick cut to Justin…)


Charlotte vs Becky Lynch – Divas Championship (ya ya ya cat fight)

Since the last PPV, it has been brought to my attention that Charlotte is Ric Flair’s daughter. He must be so proud. Having your daughter objectified and sexualized on TV is the dream of every father. Does she do that goddamn awful “Wooo” chant too? I bet it comes out all whiny because women are always complaining. In the promo photo, Becky seems to be wearing some form of welding goggles. I know ladies like to accessorize but I can’t really figure this one out. Unless she requires those when cleaning the oven, I don’t see how they’re practical. But I’m no fashion expert. Aside from my misogynistic jokes, how come the ladies don’t get a shot in the main event? Yes I know in a true physical showdown it’s not fair, but in make-believe land there’s gotta be an angle Vince and the WWE can play. The fact that this hasn’t happened yet disappoints me. Let them fight. Or have them organize a Rumble bake sale. Just get them involved. (There’s a night on the couch in my near future, I can just feel it)

The Pick: I’m backing Becky. She most likely won’t win but fuck Ric Flair. Yeah, I said it. Although my buddy Derek does a dynamite Flair impression/performance. So I should be in Flair's corner. But Derek also shares his friends' secrets. He’s a narc. An Informer. A licky boom-boom down. So there’s that. (Gotta love an early 90’s reference)

I’ll just come right out and say it. I don’t like this Del Rio guy. He’s got that shitty smug smirk (alliteration on fleek) that makes you wish a car would fall on his face. Meanwhile, I think I could really get behind this Kalisto guy. I mean, I can see myself rooting for Kalisto. Yeah, I’m all done talking about this match.

Would you look at this bullshit. Who the fuck are Darren & Damien? I see the Dudley Boyz both wear stupid glasses so they must be related. HA, THAT’S THE GAG, RIGHT??? The Ascension is clearly a group of guys running an S&M club. And they’ve teamed up Swagger & a guy nicknamed Sexual Chocolate. You people pay money for this? You’re all being swindled.

The Pick: Swagger & Sexual Chocolate. Look at those names. Those names aren’t losing this match. I say it comes down to those two and the Ascension. As Swagger lays unconscious, the Ascension attempts to give Henry the Auto-Asphyxiation, but he breaks free, and gives one of them the Sweet Tooth, and drops the Diabetes Elbow (pronounced DIE-A-Beat-Us in the Walter Brimley voice) on the other.

Ahh, the Rumble. It’s the March Madness of wrestling, only if March Madness was a tournament of comic-con characters. I remember as a child (keyword: child), the other kids on my street and I would hold our own version of the Rumble. Only it ended when one kid stuck a piece of broken glass in another kid's arm. It wasn’t the nicest neighborhood. Moving on. There’s no way I am running down each competitor in this shit show. So I’ll just give my 2 cents on a handful of them…

Roman Reigns – The Champ is apparently the #1 entrant. Which means he’ll be target #1 the entire time. But obviously he’s making it to the end because he has to be a hero and heroes survive. Actually I have no clue if he’s considered a good guy or a bad guy. But he’s making it to the end. Oh, and if you continually use the phrases “Face” & “Heel” instead of the good/bad guy, then you deserve a heel to your fucking face.

Sheamus – He’s not going out early. All he needs is a half dozen pints of Guinness and he won’t feel a thing. The question is how many guys are getting the Bangers & Mash. I don’t care what his finishing move is actually called (Danny’s is called the Letdown), there’s 0% chance the name is better than the Bangers & Mash. Someone with WWE connections should get them in touch with me. I’ll sell them the idea for a small fee.

Chris Jericho – I had no idea this guy was still around. I remember him from the Y2J crap. Which never made any sense. I’m guessing that this gives Danny a slight chubby. He’s a Jericho superfan.

Stardust – Is he related to Goldust by any chance? Because Goldust is my buddy Scotty Pickles' favorite wrestler of all time. You should see him do that weirdo Goldust catchphrase. It makes us fellas laugh and all the girls leave. If he ever does it in public, he runs the risk of being arrested.

Brock Lesnar – Is this no-neck goon a UFC fighter or a wrestler? For god's sake, make a decision and stick with it. Maybe it depends what cycle he’s on with his “vitamins.”

Bray Wyatt – Is he part of the famed Wyatt brothers by chance? MOONSHINERS ALL AROUND!!

Dolph Ziggler – I don’t know the first damn thing about this guy, other than that name is absolutely BOSS. With a name like that, you’re either a wrestler or a character in Boogie Nights.

HHH – Another guy I can’t believe still wrestles. Is there a senior tour for all these guys like there is in golf?

The Rock – No clue if he’s actually involved. But I’ve smelt what some of his movies were cooking and he might want to get back in the ring.

Stone Cold Steve Austin – The G.O.A.T. This is just me pretending he’d be involved. It’s the only reason I’d consider watching.

Obviously there are more. But I can only write about so many dudes in short tights.

The Final Prediction: The last four standing are Reigns, Sheamus, HHH and Lesnar.  Sheamus is drunk off Jameson and falls out of the ring when he reaches for some shepherd’s pie that’s not actually there. HHH loses as he gets distracted when Stephanie McMahon shows up ringside and gives him shit about being out so late. Lesnar wins the belt when he headbutts Reigns into the parking lot with his giant cement head.


I’ve said it before, but I’ll say it again. How any adult with even the slightest cognitive reasoning would watch this horseshit is perplexing.  And a lot of my friends are fans of this nonsense. But I’m considering getting rid of them and starting over. Wrestling is and will forever be incredibly stupid. And that’s the bottom line, because go fuck yourself.

Posted by Justin Enuffa Ballard at 11:24 AM