THE GREATEST TRADE IN NFL HISTORY

Sixteen years ago today, Bill Belichick became the 14th head coach of the New England Patriots. When that happened, it completed the most lopsided trade in the NFL’s history.  Sure, maybe back in the 20’s, the storied Wanker County Bootleggers traded a coupla grass grazers with Ma & Pa Kettle for Strong Arm Johnny Beesknees, but in the 30+ years I’ve been watching football, the New York Jets trading Bill Belichick is the most one-sided trade in the game’s history.


The only trades that I can think of that come close to the impact of the Belichick trade are the Dallas Cowboys' trade of Herschel Walker to the Vikings and the Packers' acquisition of Bret Favre from the Falcons. The Walker trade is still the biggest trade in NFL history, as far as how many people were moved. And it obviously started the Cowboys onto a string of Super Bowl wins. When the Falcons traded the ol' gunslinger up north to Green Bay, they had no clue they were giving away one of the best QBs of all time. The onfield impact of both those trades was immediate and both the Cowboys and Packers went on to great success after those swaps.

But nothing beats the Belichick trade. For decades, the Patriots were a laughing stock. They had a 1-15 season, their stadium was a joke and they were destroyed in their only two Super Bowl appearances up to that point. They had some success with Bill Parcells but he walked out the door to go grocery shopping with the New York Jets. When that went sour and the Jets tried to install Belichick as the new head man, he famously resigned as HC of NYJ. He was moving on to New England.

Belichick swooped in, taking the reins full speed ahead, and the Patriots have not looked back since. They have become the most successful franchise in all of sport, and it’s not even close. The last 16 years have had the Patriots win 13 AFC East crowns,  6 AFC Championships, and 4 Super Bowls. In a league that is based entirely on parity, Belichick has taken a blow torch to that parity and burnt it to crisp. He has taken a franchise that was an eyesore and almost moved to St. Louis, and made it the crown jewel of the entire NFL.

I say it's the greatest trade of all time mainly because he has changed not only the Patriots but the entire NFL. Belichick thinks differently than anyone else in the football world. Every innovation he thinks up, the whole league scrambles behind him trying to either copy him or change the rules so his team is no longer allowed to use his new schemes. He zags while everyone is still zigging after his first zag. They can’t catch him, and haven’t been able to for years.


Belichick's culture is not so much a sweeping change as it is a mindset. A cult almost. His impact is felt in every interview you hear from him, his players or his coaches. It's truly amazing to see a man have all these others follow him into the fray year after year and all believe in his message, "Do Your Job."

His unprecedented 16 years of success will never be seen again in the NFL. No one will come close to the win-loss record he's had over the last decade and a half. His rigid ways of running his franchise may seem like some sort of totalitarian government on the outside, but to his players and the fans, it’s the only way to do your job. The Patriots may have lost the AFC Championship game this past Sunday, but I’ll bet you dollars to donuts that they’ll be right back there next year with BB firmly in place.

And every time a trophy is hoisted by that man, another tear is shed from the Jets, the  franchise that traded him away.  You could play a game of what if...what if the Jets were able to keep Belichick as the head coach? You could play that game. But you know they’d just fuck it up. It’s the Jets. 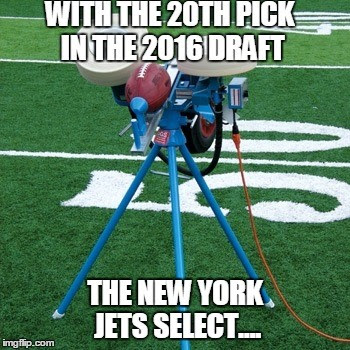