B-Cuddy's Pats Recap, Looking Ahead to the Offseason

Patriot fans are spoiled. The team has been in contention for 15 years. But all losses hurt, and they hurt more the deeper you go in the playoffs. For instance, when Jacksonville loses, their five fans just call that “Sunday.” Patriots fans go into mourning. That’s just how it works. Here are some of the things that went wrong in the AFC title game… 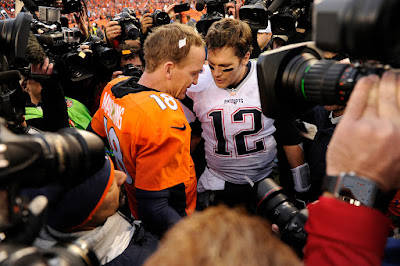 1. Offensive Line - The most glaring of issues for the Patriots was without doubt the offensive line. Their lousy play cost the Patriots the game maybe above all other factors. The line has been a problem all year. Due to injuries, they’ve had to trot out something like 117 different mash-ups of fat behemoths to protect Brady. I think even Danny and Miggsy suited up a couple games. Never good. There were times on Sunday when Denver only rushed 3 guys, and 2 of them got to Brady. That’s just embarrassing. I don’t care if you’re a pro-bowler or a 4th stringer. At least be a body and get in the way of a guy for a god damn second. Even try holding here and there. I know it’s the old cliché, “There’s holding on every play.” Well not from the Pats O-line. They looked like a bunch of blindfolded amputees out there.

2. Denver Defense - You have to tip your cap to them. Obviously, their front rush was terrific going against the atrocious O-line mentioned above. But their secondary was outstanding as well. I would say on 85-90% of the plays that had Brady peeling himself off the grass, the replay showed that nobody was open. Gronk still had a great game by the end, but he’s a legit freak of nature. Edelman and Amendola on the other hand were mostly contained.

3. Being One-Dimensional - Not having a running game, or even a semblance of one, is a bad thing. The Broncos defense never once respected the Patriots' ability to run the ball. And they didn’t have to. When Steven Jackson was in, I think I even saw a few of them laugh. Brady had the longest rush of the game for the Pats. And he moves like a glacier.

4.  Decision-Making - As always, it’s easy to second-guess a decision once you know the result.  There’s a couple that stand out here. I’d say the decision to not kick the field goal on 4th down with 6 minutes left was a 50/50 call. But the decision I thought was worse was the actual play call on that 4th & 1.  A play action pass only works if the other team thinks you might run it. As mentioned 30 seconds ago (or an hour, if you read like Derek), the Broncos never thought this. Since the entire world knew it would be a pass play, the Pats should have lined up in the shotgun, and given Brady options. Another decision, one of Tom’s, is the interception he threw to Von Miller. He was trying to force it to Gronk. Miller was there the entire time, and Brady needs to throw that elsewhere. It gave Denver the ball in the redzone and basically 7 free points. Not Tom’s best play.

5. Missed Extra-Point - Did it play a part in the loss? Sure. Is it embarrassing to miss a PAT with no wind? Yup. But that’s not the reason they lost. The Patriots had chance after chance to take control of the game. The Pats defense played INCREDIBLE in the 2nd half, holding Denver to 3 points. The offense just never got it going. Like when you’re a dozen drinks in and really tired and….never mind.


6. Injuries - Every team has them so nobody is going to feel any sympathy. But the fact is they play a crucial role in determining the winner each year. Ask any Steelers fan if they think not having Antonio Brown/Le’Veon Bell/DeAngelo Williams hurt them in the divisional round. The Patriots had an abundance of injuries this year, but two especially stand out now. The first is Nate Solder. I always believed the guy was a little overrated simply for being the left tackle for a great offense. But I was wrong (Which is rare). The Pats were never able to replace him once he went on IR. The other player was Dion Lewis. Before the season started, nobody thought a journeyman RB with multiple knee surgeries would matter. But Lewis ended up being an absolute essential piece. He was dynamite in his too-short (Not the rapper or Keith) first season with the Patriots. He could run and catch, and was one of Brady’s favorite weapons early on. When lined up in the backfield, the defense had to account for a running or passing play. Unfortunately, when Dion tore his ACL for the 45th time, the Patriots lost most of their unpredictability.

The 2016 NFL Salary Cap is expected to be around $153 million. On paper right now, the Patriots owe a little over $149 Million in salaries. My superior math skills suggest that isn’t a lot of wiggle room (They have $96 million committed in 2017). Obviously there will be roster moves to free up some money. The most obvious person that this will affect is Jerod Mayo. Mayo has been a solid Patriot, but the fact is he is now probably 4th in the Linebacker pecking order, and has landed on IR each of the last two seasons. He’s getting his contract restructured or flat-out released. If they cut him after June 1st, the Patriots save $8 million against the cap in 2016 alone, and $9.5 million over the next 2 seasons. I’d say there’s a better than 50% chance that Mayo doesn’t return. There’s also a 100% chance that Mayo is the worst of all condiments. Absolutely disgusting. Anyone who eats it is a savage. Moving on, another guy surely to be given his walking papers is Scott Chandler. He never panned out and cutting him would save the Pats an additional $2 mil. See ya later. I also wouldn’t mind if they cut Marcus Cannon. That would be $3.6 mil off the books. He sucked something awful all year, but his play on Sunday was especially horrid. I’m actually not sure if I’ve ever seen a worse performance from an O-lineman. Cutting him seems unlikely however. It’s obvious the Pats need as many O-line bodies as possible, and they will most likely keep him for depth.

The Pats may not have a ton of cap room right now, but they are always savvy in creating space. Whether that’s restructuring or back-loading deals. Most of their free money will probably go to resigning current players. And their focus for 2017 and beyond has to be for Dont’a Hightower, Jamie Collins and Chandler Jones. All three of these guys will be in the last year of their current deals in 2016, and the Pats should be doing everything they can to keep all three. I wouldn’t be surprised if one of them gets franchise tagged. Also, if Jabaal Sheard plays as well as he did this season, he’s going to be in the market for a new deal. So things are already adding up. The defensive core is young and talented. Keeping it together is the team’s best shot of sustaining success. For the immediate 2016 season, it seems imperative that they find some lineman, and a new running back or two. These guys don’t need to be Hall of Famers, but they need more talent in these positions BADLY. Lewis coming back healthy would be a bonus, but you just can’t count on him being there all season when his knees are like my grandmother's. Blount should be on the roster only so he can murder the Colts. But as far as the three-headed shit-monster of Jackson-White-Bolden?...NO THANKS. It’s time to move on from them. White was supposed to fill the Vereen role but that requires catching the ball on at least one wheel route in your lifetime. Bolden shows me nothing year after year except for a killer first name. And I think Jackson gained seven yards total since being signed. The Pats would also benefit from adding a cornerback.  Butler has the #1 spot cemented. Logan Ryan is kind of hit or miss, but I thought was decent overall. But adding one more solid corner could make them one of the better secondary units in the league. (People will fantasize about a guy like Joe Haden from Cleveland. He would welcome leaving that dump because nobody likes Cleveland, even its citizens. But he’s signed thru 2019, and his salary is enormous). The last position of mention is Wide Receiver. It would be nice to see the Pats get a legitimate outside threat. Gronk is amazing, but imagine what would happen if a receiver commanded a safety’s attention over the top. LaFell didn’t cut it this year. He was like Ricky Bobby doing TV.


The pipe dream of all pipe dreams would be if the Pats somehow got….

….Calvin Johnson. That’s right, baby! Megatron. It’s extremely unlikely, but not impossible. Like Haden, he’s signed forever for big money. Unlike Haden however, his team cannot afford to keep his salary as is. Johnson’s remaining salary is about $80.6 million. 80!!!!!! I can buy a house in Detroit for $12 but somehow he gets paid over $20 mil a year. INSANITY. Detroit can save just under $63 million of that if they were to cut him. However, they will do everything in their power to restructure his deal and keep him. But Calvin could force their hand if he decides not to negotiate, or if he demands a trade. (If he does that, he’ll have to restructure anyways because there isn’t one team that would take on that salary). He’s not what he used to be, and he’s hinted at retiring. But that might be because Detroit is like Diet-Cleveland more than anything. If he decides it’s time for a change in scenery, I think the perfect fit would be New England (Not that I’m biased). Think about it, Cal. Can I call you Cal? You’d have Tom Terrific throwing to you. You wouldn’t be quadruple covered anymore. You’d play in January. Pats fans would love you. #81 shirts would be everywhere. And a murdering psychopath’s name wouldn’t be on them. Oh it would be glorious. Like I said, chances of this being a reality is around 1%. But like my good friend Andy from the clink once told me, “Hope is a good thing, maybe the best of things.” He also told me to watch out for “The Sisters.” Guy had a lot of great advice.

(I guarantee there will be grumblings of Calvin playing somewhere else this summer. And then some of the talking heads that get paid for their wonderful insight are going to link the Patriots as a potential landing spot. Just remember where you saw it first.)
Posted by Justin Enuffa Ballard at 1:19 PM