In another case of low expectations paying off, I really enjoyed Royal Rumble 2016.  For the first time in close to a decade WWE presented a Rumble card that had nary a bad match, plus a very fun Rumble match that felt like it shook things up a bit.  While I'm not terribly excited about WrestleMania 32's main event prospects, the undercard finally has some real potential thanks to at least one exciting new face being added to the mix. 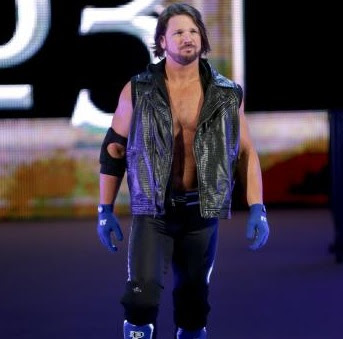 The opening match stole the show, as hated rivals Dean Ambrose and Kevin Owens squared off in a Last Man Standing match for the I-C Championship.  It's well-documented that I'm usually not too fond of the LSM stipulation, but these guys a) didn't waste much time on near-falls (or near-counts?) and b) worked in some clever spots (like Owens rolling out of the ring at the last second and landing on his feet to keep the match going).  They got a solid 20 minutes to create a really strong fight and told a great story of two guys who really despised each other.  This probably won't hold up as WWE's Match of the Year, but for now it's their top candidate.  Damn good stuff there. 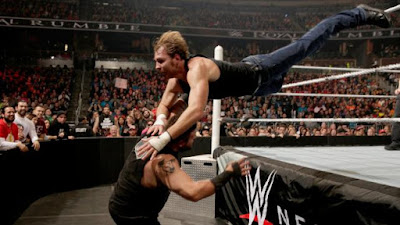 The Tag Title bout was fine.  I'm sick of seeing these two teams fight each other, so some new blood is desperately needed in this division (no idea who's next for The New Day).  But this match was fine.  Well-worked and energetic, and the right team won.


The US Title match was a fun little underdog story.  Kalisto is an exciting young talent who will hopefully get a good US Title run this time (The one-day reign last week was a head-scratcher) and won't be booked into oblivion like Rey Mysterio was as World Champ.  Kalisto now needs to string together some great Title defenses to maintain the equity John Cena built up in this Championship last year.

Next up was the Divas Championship (Still waiting for the Divas monker to be phased out - those skeptical of women's wrestling will never take this division seriously under that name), which again was a well-worked little match.  Nowhere near as good as these two are capable of, but still light-years better than anything since the Trish Stratus era.  The finish was silly but I actually kinda liked it.  Flair tossing his jacket over Becky's head made for such an insane visual, I couldn't hate it even though I know I should've.  And the post-match angle got my engine all revved up.  Sasha Banks stepped up and challenged Charlotte (now will this happen at FastLane or 'Mania?), rekindling their rivalry from NXT.  I've said it before - Sasha Banks is as good as anyone on the WWE roster, and I hope Creative knows what they have with her.  She should be the central figure of the women's division going forward.

Now for that Rumble match.  I can't overstate how refreshing it was for the Rumble to be fun to watch again.  After five straight Rumble matches either devoid of star power or full of confounding booking decisions, it felt so good to see multiple people get time to shine, multiple stories play out, and an ending that (while I have reservations about it) made sense on some level.

The big story for me was of course the debut of AJ Styles.  Seeing Styles in a WWE ring was absolutely surreal.  When he entered at #3 I feared the worst - a three-minute cameo followed by a dump-out at the hands of Reigns.  But AJ got nearly a half-hour and tossed out a couple guys, and the Orlando crowd LOVED him (Evidently his new WWE shirt is already sold out!).  Kevin Owens finally eliminated him, hopefully setting up a match at Fast Lane (though Owens-Zayn could be on the horizon as well).  Not a bad debut for one of the best pound-for-pound wrestlers in the world.  It's all up to WWE's follow-through now.  Don't fuck this up, guys. 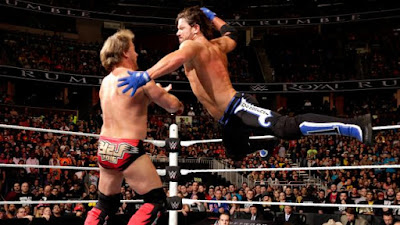 The other stories included Brock Lesnar vs. The Wyatts, which will obviously lead to Lesnar vs. Wyatt at 'Mania - not a match I'm super hyped about, especially given how much Bray's stock has fallen.  But it's something at least.  It'd be fun if Brock found three allies to fight the entire Wyatt family, perhaps at Fast Lane.  Too bad The Shield is no more. 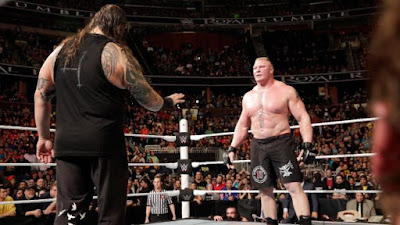 Finally we had the match-ending storyline, where Triple H somewhat predictably entered at #30, out for revenge against Reigns.  And the crowd was almost entirely on Hunter's side.  That's not so good if Reigns is to be the top babyface.  What's also not so good is the fact that Reigns is a two-time WWE Champion and he's only had the belt for a month total.  I also wasn't a fan of taking Reigns out of the match for half of it - surely he would've looked stronger and more sympathetic if he'd lasted the full hour only for Hunter to swoop in and steal it.  The fact that Reigns wasn't in the final two and the crowd went nuts for Ambrose's near-win should be yet another sign that the WWE fans are just not that into Roman.  A heel run would help his career immensely; I have a hard time picturing the WrestleMania crowd being solidly behind Reigns against Triple H.

Anywho, Triple H is now a 14x WWE Champion.  It is what it is.  I'd be lying if I said I'm stoked about a 46-year-old with a history of ugly backstage politics getting yet another Title run (Hunter is now the third-oldest WWF/E Champion of all time, behind Vince McMahon and Hulk Hogan).  Yeah, I know it's coming back to Roman on April 3rd, but it's another indictment of WWE's inability to build new stars that without Seth Rollins The Authority has no top-level heels to put in there against Reigns.  The idea of a Reigns-Triple H main event doesn't exactly blow my skirt up and it'll be the fifth consecutive 'Mania main event featuring a part-time guy. 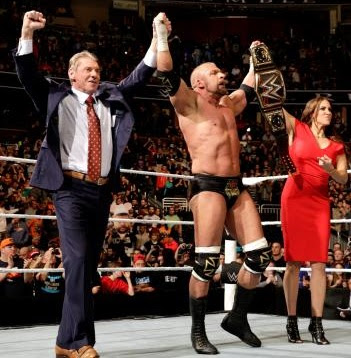 But unlike last year this WrestleMania should have at least one match specifically for fans like me.  With the debut of AJ Styles there are numerous 'Mania possibilities (and that's even before Shinsuke Nakamura comes on board).  AJ could face Chris Jericho, Dean Ambrose, a returning Daniel Bryan....  Any of those would be a likely show stealer.  Between that scenario and a refocused women's division it seems like WWE is at least making an effort this year to please the die-hard fans in addition to catering to their own limited tastes.  There's something to be said for that.

This Royal Rumble made me considerably more optimistic and intrigued for WrestleMania season (Before yesterday I was seriously considering tuning out of WWE's main roster product for a while), and that's already a major improvement over 2015.  And it was a damn enjoyable night of wrestling to boot.
Posted by Justin Enuffa Ballard at 12:27 PM