Welcome to another edition of official Enuffa.com PPV Predictions!


This month it's WWE's beloved Royal Rumble!  Since January 1988 the Rumble has been the Pro Bowl of wrestling, where most of the roster jumps into the melee and tries to be the last guy standing.  Usually the winner gets a WWE Title shot at WrestleMania, but this year is a little different.  We'll get to that in a bit.

While historically the Rumble has been one of the most enjoyable hours of WWE television all year, the last few editions have left a lot to be desired (That's putting it mildly).  Whether due to a thin roster, creative clusterfucks, backstage politics, what-have-you, there hasn't been a really strong Rumble match since 2010 in my view.  2011's Rumble was needlessly expanded to 40 participants (when there wasn't nearly enough star power to warrant such a change), 2012's Rumble was full of lower-tier wrestlers, plus ALL THREE ringside announcers, 2013's was far too predictable, and in 2014 & 2015 "the wrong guy" won and was summarily booed out of the building.

Sadly, given how nonsensical RAW has been over the past few months, the 2016 edition doesn't bode all that much better, but perhaps we'll be surprised.  At least this year's undercard looks pretty solid despite all the injury-generated roster holes.  All Titles are on the line so at least there's a sense of urgency to the undercard bouts, and on paper they all look good.  So let's get to the predictions.

**Note: Our esteemed (not really) colleague Brandon will be submitting his Uninformed Wrestling Picks a little later on, so keep an eye out for those** 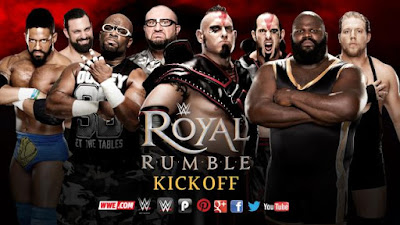 This four-way tag was thrown together yesterday as a way to shoehorn two undeserving fellas into the Rumble match.  Not much to root for here, as none of these eight guys have a snowball's chance in hell of winning the WWE Title later on.  Also here's a question: Why the hell is Darren Young teaming with Sandow?  Why aren't the Prime Time Players reunited?

Justin's pick: I guess I'll go with the Dudleyz since they'll at least get a decent pop in the Rumble match and there have been rumors of a Bubba Ray singles run, a la his "Bully Ray" gimmick in TNA.
Dan's pick: None of these guys gets anyone's motor running. And yeah, why the hell aren't the Primetime Players a thing here? This will be a mess that the Dudleys will win. 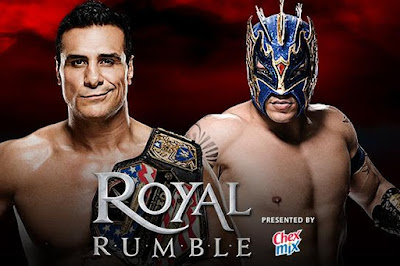 Someone explain what the point was of giving Kalisto the US Title for one day.  I like Kalisto and think he has tremendous potential to follow in Rey Mysterio's shoes as the company's Hispanic ambassador.  So giving him a US Title run seemed like a great idea.  But then he dropped it 24 hours later.  More of that 50/50 booking that does no one any good.  But here's the rubber match.  Should be a solid outing, but it's another case of "Why should I care?"

Justin's pick: If I know how Vince thinks (He usually doesn't), that one day of Championship gold was Kalisto's big singles push.  Del Rio retains and Kalisto waits in limbo until Sin Cara gets back from injury.
Dan's pick: No clue what the one day title reign was all about. Maybe to test the waters for a win on a bigger stage? THE MASKED MAN RIDES AGAIN!!!


WWE Tag Team Championship: The New Day vs. The Usos 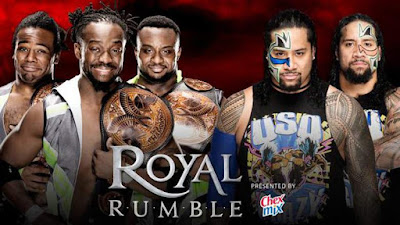 This one's been building for a while and should be quite entertaining.  The New Day are still a great heel act and both teams are fun to watch.

Justin's pick: I see no reason to take the straps off Kofi & Big E yet.
Dan's pick: Dude, ENOUGH with this match. This is roughly he 837th time it's been done. Let's watch the New Day win and move onto a new feud please? 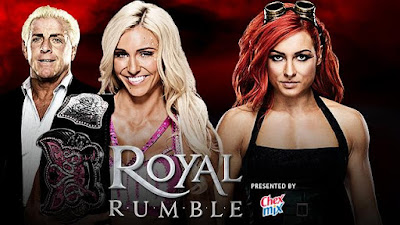 If given enough time this should be one of the best matches on the show.  This feud has of course been poorly booked but the match quality should be top-notch.  I have to think the winner of this match (or both participants) will face Sasha Banks at 'Mania.  Can we for fuck's sake change the name of the belt back to Women's Championship?  These are athletes, not opera singers. 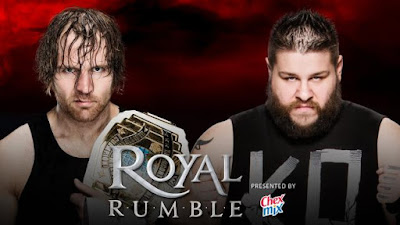 This has been the only really good feud lately and it will almost certainly steal the show on Sunday.  I generally don't like the LSM stipulation but I think Dean and Kevin will make it work.  This should be a fine contest.

Justin's pick: Ambrose just won the strap so I think he retains it.
Dan's pick: I concur. But this should steal the show. 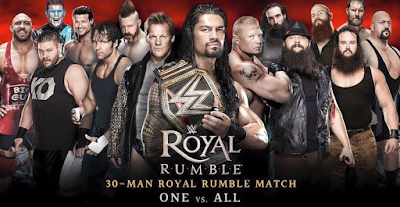 Were the roster not totally injury-plagued, this Rumble match could be great.  Imagine a WWE Title Rumble with Reigns, Lesnar, Cena, Orton, Sheamus, Bryan, Rollins, Cesaro, etc.  It would be amazing.  Unfortunately all but three of those aforementioned names are on the shelf and one of the remaining three hasn't a prayer of winning.  This comes down to Reigns vs. Lesnar, unless someone like Triple H is a surprise entrant and walks away with it (which would be utterly ridiculous).  So who's it gonna be, folks?  Only 13 names have officially been announced (plus the two pre-show winners), and I wonder if the undercard wrestlers will pull double duty.  There's also the question mark of AJ Styles' impending debut.  Will it be in the Rumble?  Will he attack someone and cost them the Rumble?  Will he wait until Monday to show up?  Who knows?

Justin's pick: Roman Reigns runs the table.  It's the only sensible thing to do if you're serious about strapping the rocket to his back.  The days of Reigns being an underdog sucker are over.  He's only had the belt for a month and it's the LONGER of his two Title reigns.  No other move makes sense here.
Dan's pick: I gotta agree, as boring as it is to have the same pick. My dark horse is HHH but I think Mr. Stephanie really does like to do what's best for business. And he knows him winning is the opposite of that.  Reigns supreme.


Well that's what we got.  Take it or leave it.  Stay tuned for Brandon's Totally Uninformed Wrestling Picks soon, and enjoy the Royal Rumble (if you can).
Posted by Justin Enuffa Ballard at 11:20 AM