Wow.  New Japan Pro Wrestling has done it again.  They were tasked with living up to the transcendent WrestleKingdom 9 and somehow they managed to do just that.  WrestleKingdom 10 has set the bar VERY high for all other wrestling shows in 2016, and I don't think it's any stretch to say the Best PPV of the Year Award has already been decided.  Sadly this amazing show turned out to be a potentially bittersweet moment for New Japan, as reports are coming out about multiple stars giving their notice to the company, presumably to try their hand in WWE.  But we'll get to that.  First, WrestleKingdom....

There was literally not one bad match on this show.  It started off incredibly fun and with almost no wasted time in between matches the pitch never dropped below "neato."

The opener was predictably wild and innovative, as reDRagon, The Young Bucks, Roppongi Vice, and Aerial Dogfight (Matt Sydal & Ricochet) tore it up with crazy tandem moves galore.  After nearly 17 minutes of non-stop offense Matt & Nick Jackson regained the Jr. Heavyweight straps.  Great way to kick things off, as usual.

Next was the NJPW debut of The Briscoes, who teamed with Toru Yano against Bullet Club members Bad Luck Fale, Tama Tonga & Takahashi.  This was probably the weakest match of the night, but only by default.  For twelve minutes these six put on a helluvan entertaining little show, culminating in Yano and the Brothers winning the brand-new Six-Man Championship.

For the first time ever the Ring of Honor World Title was defended in the Tokyo Dome as Jay Lethal and Michael Elgin delivered a fine undercard match.  While a bit underwhelming for a major title bout, this was still very solid stuff, and as I expected Lethal retained - I imagine ROH would prefer to book a title change on their own turf.

Moving right along, the hits kept racking up with Kenny Omega vs. Kushida in the rubber match for the Jr. Heavyweight Title.  While not as strong as their previous two bouts (understandable given the time constraints), this was still easily a 3.5-star affair and told the story of Kushida defying the odds to regain the Title.  It also served as Omega's swan song in the Jr. division (as we'd see the following night).  Damn good stuff.


Traditionally the weakest part of most New Japan shows is the World Tag Title match, as their Heavyweight Tag division is paper thin.  But this match was an exception thanks to a massively over set of challengers in Honma and Makabe.  Obviously this was no five-star classic, but the hot crowd and Honma's energetic offense, coupled with a slimmed-down, motivated Karl Anderson added up to a fine bout.  Finally the perennial underdog Honma got his first taste of gold, and I'm hoping Great Bash Heel gets to be the new centerpiece of a reinvigorated tag division.

The final undercard match was next as Hirooki Goto sought revenge against hated rival Tetsuya Naito.  This had a lot of outside the ring shenanigans to kick things off, but once it settled down it became a very worthy bout.  Shockingly Goto withstood interference by Evil and Bushi to get the win, elevating him back into Title contention.

Now just looking back at that undercard, that in and of itself is a rock-solid lineup.  Nothing below 2.5 stars in the first six matches.  But it was the triple main event that launched WK10 into the stratosphere.

The NEVER Openweight Title showdown between Tomohiro Ishii and Katsuyori Shibata was seventeen minutes of sheer brutality.  As expected, these two sluggers beat the bejeezus out of each other, at least equaling the brilliant Ishii-Makabe match from last year.  In the end fan favorite Shibata finally won a singles championship with the Penalty Kick.  I'm very much looking forward to seeing where Shibata takes this belt, which at this point should be renamed Strong Style Championship as far as I'm concerned.  Or maybe something catchier, like the Beat Your Ass Championship.  Excellent match, but we hadn't seen anything yet.

The semi-main event went to the much-anticipated Shinsuke Nakamura-AJ Styles dream match, and it did not disappoint.  If Styles was still suffering from his recent back injury you wouldn't know it by watching this.  Aside from toning down his aerial assault AJ wrestled a near-perfect match and even worked his back injury into a "goldbricking" spot.  Nakamura was amazing as always, and these two A-plus players put together an instant Match of the Year contender.  I'm not sure which was better, this or the main event.

Okada vs. Tanahashi.  Undoubtedly the greatest feud in New Japan history.  Just when you think two guys have done everything they can possibly do in the ring together, you get a match like this one.  Thirty-six minutes of epic, World Class pro wrestling by two bona fide main event athletes.  The jury's still out on whether this surpassed their amazing effort from WK9, but there's no doubt this match at least equaled that one.  Okada and Tanahashi pulled out every stop imaginable, trading finishers, stealing each other's moves, and somehow creating suspense where none reasonably existed.  Everyone knew full-well Okada would win this, but there were several points during the match where even I gasped.  What else can be said?  This was just about perfect.

I'll need to watch this show at least once more to decide which of the two main events I preferred, but they're essentially tied for The Match to Beat in 2016.  I'm also not sure if I liked WK9 or 10 better, but it's splitting hairs at this point.  They're two of the greatest wrestling shows ever assembled.  If you haven't subscribed to NJPWWorld.com, do it.  Do it now. 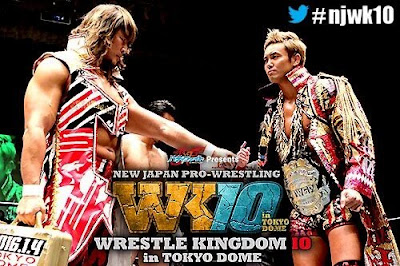 Now, about that "bittersweet" comment.  You've probably all heard by now that four New Japan stars have reportedly given their notice and are presumably set to jump to WWE.  The most obvious and longest-rumored name is of course AJ Styles, who was effectively written off NJPW TV at last night's New Year's Dash show when The Bullet Club turned on him and Kenny Omega became the new leader (Supposedly Karl Anderson and Doc Gallows have also decided to jump ship, which explains Anderson's slimmer physique).  I have mixed feelings about this, as I'm an Omega fan but hardly consider him in the same league as Styles.  Let's hope he's up to the challenge.  Omega will presumably face Nakamura for the I-C Title, which leads to the other bombshell.

Apparently Shinsuke Nakamura, one of NJPW's top three stars, is leaving the company.  I pretty much hate this idea.  Other than Daniel Bryan, Nak is my favorite wrestler right now, and I honestly don't know how New Japan can afford to lose him.  On top of that, he's rumored to be fast-tracked to the main roster (along with AJ), and if the past year has taught us anything it's that WWE's main roster Creative couldn't correctly book Steve Austin vs. The Rock, let alone properly utilize a Japanese star most American fans aren't familiar with.  If Nak and Styles were headed to NXT to help boost that brand to more or less equal footing as RAW and Smackdown that would be one thing.  But the prospect of New Japan's two best talents being brought to the main roster to languish in 50-50 Booking Hell, unfunny backstage skits, and weekly public emasculation at the hands of the McMahon family is too much poison to swallow.  I wouldn't trust this Creative team to fix me a ham sandwich.  It's a sad day when I'm aghast at the thought of my favorite active wrestler being signed by the biggest company in the world.  My wife even commented, "Five years ago you'd be super excited about this." 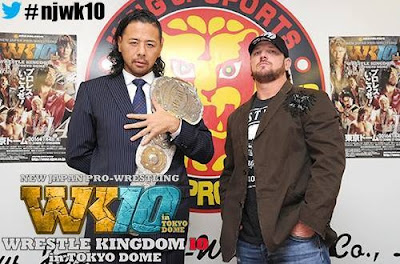 Unless Triple H officially takes over WWE, like tomorrow, I don't see this ending well.  What a way to bring the mood down after such a fabulous PPV.....
Posted by Justin Enuffa Ballard at 1:07 PM