Eclectic group of films this time.  Let's get right to it.... 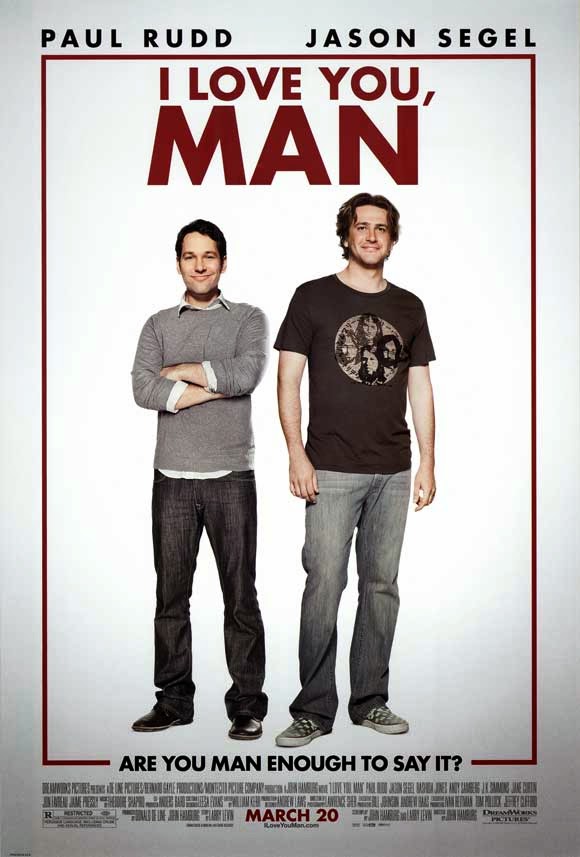 Paul Rudd and Jason Segel star in this unrelentingly funny bro-mantic comedy, directed by John Hamburg.  Rudd plays Peter Klaven, a real estate agent who has just gotten engaged and is troubled by his lack of male friends.  He has no qualified best man contenders and at the urging of his fiancee Zoe (Rashida Jones) decides to shop around for a new best friend.  At one of his open houses, he meets Sydney Fife, a free-spirited investor who frequents house showings to pick up divorcees and enjoy the free catering.  Despite being near opposites, Peter and Sydney hit it off almost immediately, and quickly become so close that Peter and Zoe's relationship soon seems at risk.  This is really just a terrific lighthearted comedy, with countless quotable jokes ("Slappa da bass, mon!"), likable characters (Is there a more affable star out there than Paul Rudd?) , and perfect chemistry between the actors.  There isn't a whole lot to dissect or analyze; it's just a wonderfully enjoyable romp that I find myself able to watch just about anytime.  Also on a personal level I Love You, Man is largely responsible for my newfound appreciation for the music of Rush. 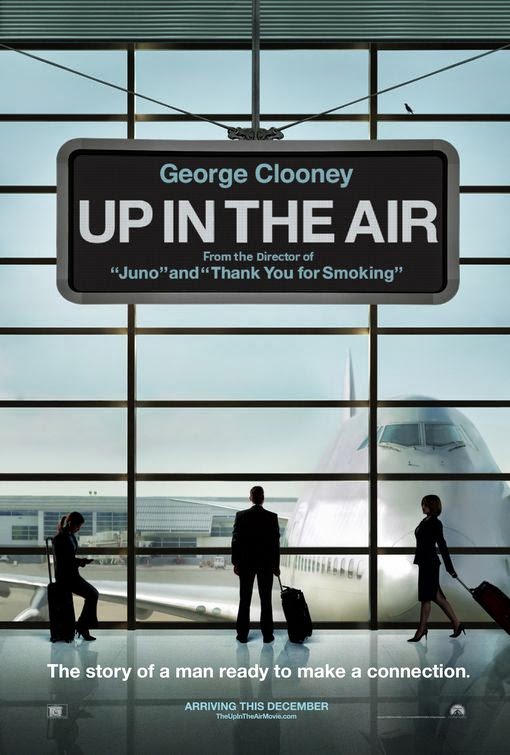 Adapted from the 2001 novel of the same name, Wunderkind director Jason Reitman's third film stars George Clooney as Ryan Bingham, a professional downsizer.  Ryan's company gets hired out by other companies going through layoffs, to travel to their site and fire their employees for them.  Ryan prides himself on being a lifelong bachelor with little to no roots anywhere in the country, and also on "making limbo tolerable" for his clients' unfortunate victims.  Two events throw Ryan's simple, easily manageable life into turmoil: he meets and begins to fall for fellow business traveler Alex (Vera Farmiga) who initially seems to be the female version of him; and his firm decides to cut costs by pulling all their agents off the road and moving to a virtual business model, firing people via videoconference.  This revolutionary new strategy is introduced by Natalie (Anna Kendrick), a new hire fresh out of college with designs on reshaping the industry.  During the transition, Natalie is sent on the road with Ryan to get acclimated with the business, and her tendency to question Ryan's life choices forces him reexamine his own mindset.  Clooney is wonderful as always, projecting his usual swagger mixed with a world-weary loneliness that belies his outward demeanor.  Kendrick injects her character with a cocksure energy but reveals great vulnerability as Natalie realizes the severity of what her job entails.  The script manages to pull countless upliftingly comedic moments out of what seems to be a depressing backdrop - the comatose state of The American Dream.  2009 was a year of brutally difficult economic times, and Up in the Air is a perfect reflection of what we as a nation were going through. 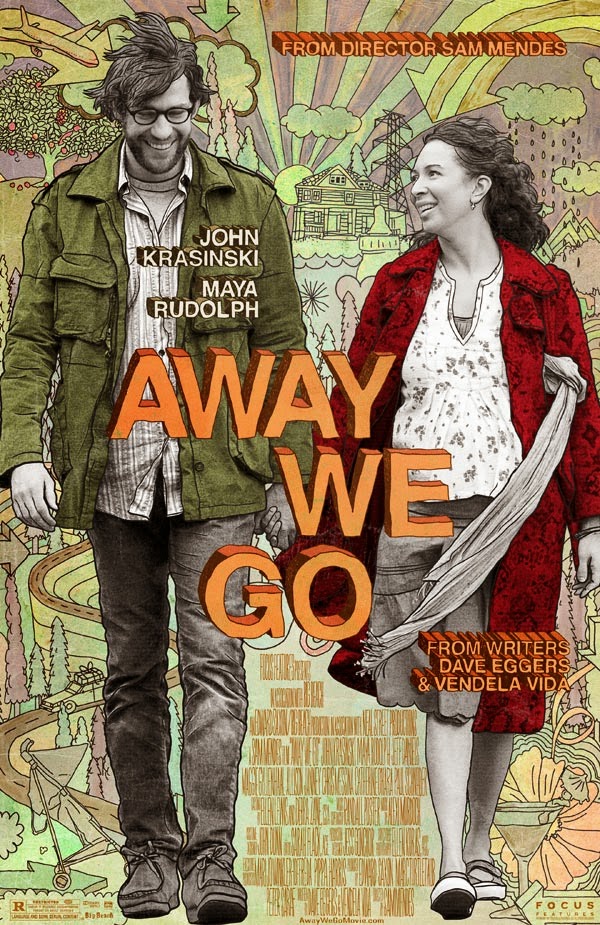 Sam Mendes adds to his eclectic filmography with this comedy-drama about a newly pregnant couple, played by John Krasinski and Maya Rudolph, who decide to pack up and move out of their midwestern shack to raise their baby in a more fitting environment.  The only problem is they don't know where they want to go.  They opt to travel to every city where they have friends or family, and then make their final decision.  Along the way they realize how dysfunctional many of their friends are, and find it increasingly difficult to settle on a location.  Krasinski and Rudolph are smart, sweet, and likable as Burt and Verona, and they're able to make us identify with the characters despite their growing intolerance for the people in their lives.  I've read reviews that complained of these characters being too snobby, but throughout the film my sympathy never left them.  Away We Go is peppered with supporting performances both hilarious and touching.  A few highlights are Jeff Daniels and Catherine O'Hara as Burt's self-absorbed parents, Allison Janney and Jim Gaffigan as obnoxious work acquiantances of Verona's, and Maggie Gyllenhall as Burt's flighty, new-agey childhood friend LN, who despises strollers and practices "family bed," rather than giving her child a separate bedroom.  The script by real-life couple Dave Eggers and Vendela Vida examines the challenges and overwhelming sense of responsibility that comes with becoming a new parent, and how it alters a couple's romantic bond.  The experience of this film has become even more personal for me since becoming a parent myself, and I've come to connect with these characters on an even deeper level than I did before.  Away We Go is a very intimate and profound film infused with both poignancy and humor, and is a joy to watch. 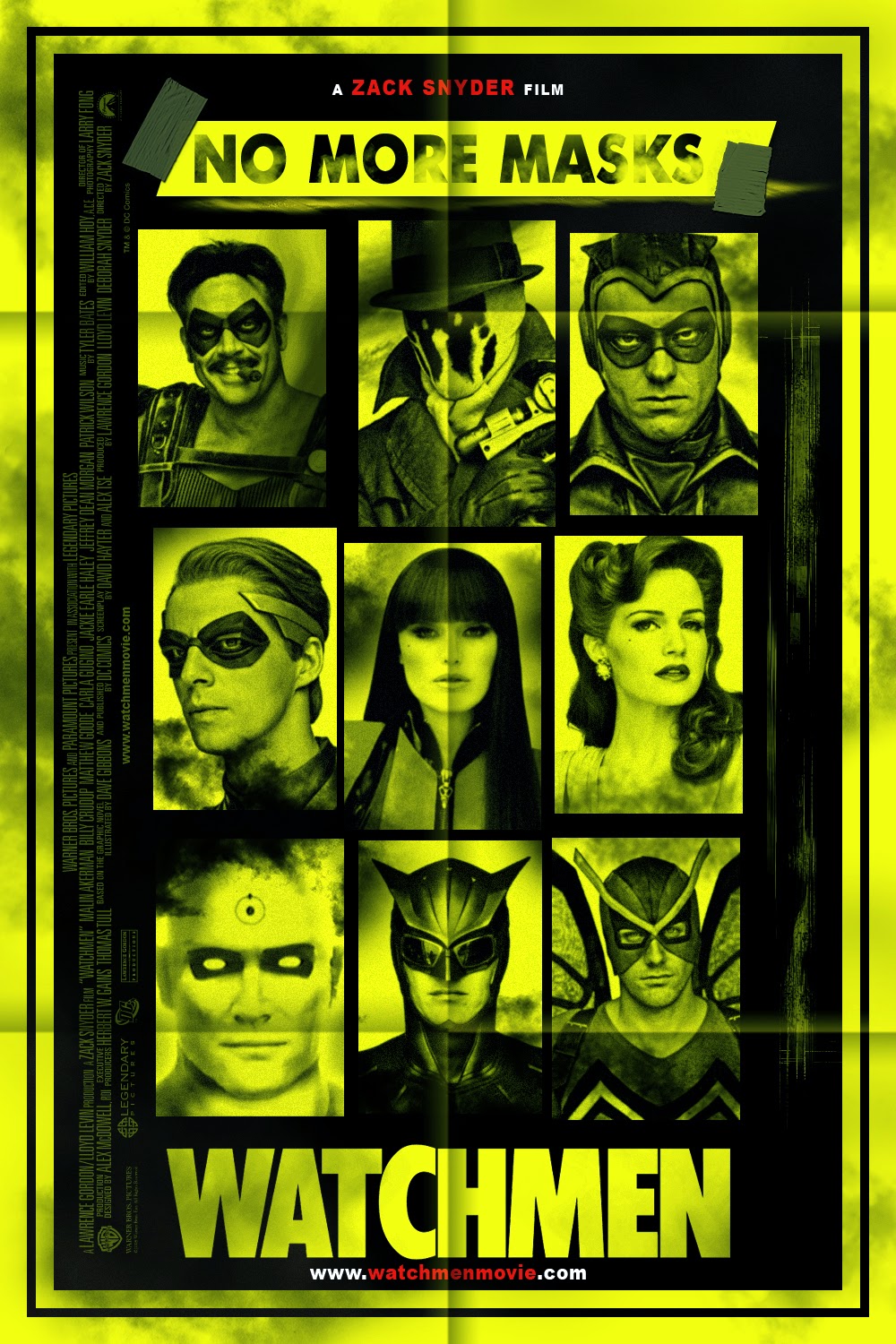 Adapted from one of the most critically and commercially acclaimed graphic novels of all time, Watchmen is director Zack Snyder's near-miraculous cinematic interpretation of Alan Moore's masterpiece.  Somehow despite the overwhelming intricacy of the story Snyder manages not only to keep track of all the important characters and threads, but to present a streamlined, easy-to-follow narrative without oversimplifying anything.  Every character arc is complete here, as well as the visual richness and plot density the novel is known for.  Given its complexity I won't go into the specifics of the story except to say the film is kicked off when one member of a former team of superheroes is murdered and the others come out of retirement to find out why.  For the most part the casting is spot on, particularly Jackie Earl Haley as the violent sociopath anti-hero Rorschach, and Billy Crudup as the detached, analytical Dr. Manhattan.  Haley makes Rorschach both completely despicable and relatable, while Crudup's Manhattan projects the impassive loneliness of a man who has grown so omniscient he can no longer relate to other human beings.  The only casting misfire is Malin Ackerman as The Silk Spectre - Ackerman lacks the worldliness and disillusionment the character needs and unfortunately seems to play the character much younger than she should be.  I've been extremely critical of Snyder's interpretation of Superman in last year's Man of Steel, but in 2009 he forged a comic book-to-film opus that ranks very high on the all-time superhero movie list.  Watchmen is one for the ages. 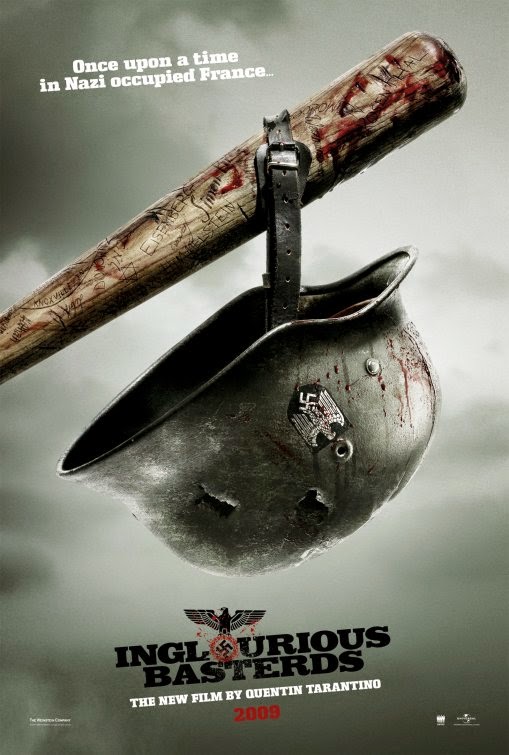 Simply amazing.  Quentin Tarantino has not one but two masterpieces under his belt - Pulp Fiction and Inglourious Basterds.  This fictional retconning of the end of World War II involves a small band of Jewish-American soldiers who go on a Nazi-hunting crusade across occupied Europe.  Led by Lt. Aldo Raine (Brad Pitt), the Basterds wreak havoc on the Nazis and eventually rendezvous with the British, hatching a plan to destroy the entire Third Reich at a propaganda film premiere.  The story is divided into five sections, each dealing with the various involved parties, from Raine's crew to the Jewish-French moviehouse owner Shoshanna Dreyfus, to the delightfully evil Nazi Col. Hans Landa, played to sinister perfection by Christoph Waltz.  The assorted narrative threads interweave and build to an explosive, trademark Tarantino climax that takes some extreme historic liberties while bringing the film (and the war) to a satisfyingly righteous conclusion.  Tarantino's writing is brilliant as always, subtly piling on tension in every scene as characters engage in small talk, eschewing the larger situation at hand.  Case in point are the opening scene involving Col. Landa interrogating a French farmer about whether or not he is abetting Jews in his home; and the later scene where British Lt. Archie Hicox (Michael Fassbender) meets up with a German spy in an underground bar that happens to be full of Nazi soldiers.  In both scenes we are fully aware of the inherent danger the characters find themselves in, but we don't completely sense the volatility of their situation until it's reached a fever pitch.  Inglourious Basterds is almost a Western disguised as a World War II picture, written and directed with a degree of twisted jubilation only Quentin Tarantino possesses.